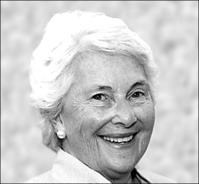 FUNERAL HOME
Brezniak Funeral Directors
1251 Washington Street
Newton, MA
SMITH, Susan M. (Flax) Of Chestnut Hill, an elegant matriarch and a driving force in Boston philanthropy, died peacefully on July 30, 2016, at age 83. A lifelong Bostonian, Susan was raised in Newton, the daughter of the late Sadie G. and Leo Flax. She married her lifelong love, Richard Smith, in 1952. While she was attending Jackson College at Tufts University, they built their family home in Chestnut Hill. She was a devoted daughter, mother and wife; a devotion that would extend into the larger community. During the terminal illness of her 2 year old son, James, ('56 – '70) she began volunteering as a Candy Striper at Boston Children's Hospital escorting patients and families to their appointments. She would later dedicate her efforts to the Dana-Farber Cancer Institute; first as a founding member of Friends of the Dana-Farber, then spearheading a pioneering effort that became the Susan F. Smith Center for Women's Cancers. As in all her charitable endeavors, she had a hands-on approach committed to research and clinical care. "I am doing this so that one day my grandchildren won't have to face this disease," she would often say, long before she would herself succumb to a rare cancer. Susan took great pride in the formation and the work of the Richard and Susan Smith Family Foundation, a leading foundation focused on Greater Boston, with her husband Richard. Together they taught all three generations of their family the art and joy of philanthropic giving. This is Susan's lasting legacy for her family and community. She particularly enjoyed attending the Boston Symphony with her husband, needle pointing and gardening at her seaside summer home in West Falmouth. Susan is survived by her husband, three children, Amy Smith Berylson and her husband John, Robert Smith and his wife, Dana, and Debra Smith Knez; eight grandchildren, Jennifer Berylson Block and her husband Jonathan, James Berylson, Elizabeth Berylson Katz and her husband Robert, Jessica Knez, Andrew Knez, Madeleine Smith, Ryan Smith and Jackson Smith; five great-grandchildren, Benjamin, Zachary, Alexander, Thomas and Sara; her sister, Carol Flax Frieder and her husband, Sam; seven nieces and nephews; and her sister-in-law Nancy Lurie Marks. In lieu of flowers, donations may be made to Susan F. Smith Center for Women's Cancers, Dana-Farber Cancer Institute, 450 Brookline, Avenue, Boston, MA 02215. A private graveside funeral will be held. Shiva visiting hours at her home in Chestnut Hill on Wednesday, August 3, 2016 from 4-7 pm and Thursday, August 4, 2016 from 2-5 pm. Brezniak-Rodman Funeral Directors brezniakrodman.com "Family Owned"

Elkan
August 16, 2016
What a tremendous impact Mrs. Smith has had on generations of cancer patients past and future. What a generous gift of self to have dedicated one's life to such an effort. Here is an example of how one person can indeed make a difference in the world. Might we all reflect on how best to channel our own energies and talents in life toward such a noble cause? She certainly inspires me to ponder this.

My condolences to the Smith family. One can only imagine how a woman with such largesse of heart must have loved those dear to her.
Lisa Murphy
August 11, 2016
We would like to extend our most sincere condolences to Dick and the Smith Family on learning of Susan' death, and I would like to again express my gratitude to the Smith family for the assistance and concern extended to me and my family through their involvement with Dana-Farber Cancer Institute.
Both Susan and the Family are in our thoughts and prayers.
Marty & Susan Denning
August 8, 2016
It is with shock and deep sadness that we offer our heartfelt condolences to the entire extended Smith family. We hope that they will derive some comfort from the outpouring of love and respect from all whose lives she touched in so many meaningful ways. Sue Smith was a leader by example - her focus, intellect, compassion, tenacity and willingness to roll up her sleeves to get the task done were an inspiration to everyone she worked with over many years. She made the world a better place and her extraordinary legacy will live on. Sue will be sorely missed
Berenice and Michael Ronthal
August 4, 2016
I can clearly recall the grace, elegance, and caring dignity that defined Mrs. Susan Smith. She "did all the good that she could, for as many as she could, for as long as she could", and she did it well. Thank you Mrs. Smith, for demonstrating so beautifully what a life well lived, looks like. We will miss you, but your example will live on. Rest well.
Sharon Jackson
August 3, 2016
My heart goes out to the entire Smith family in your time of sorrow as you grieve the loss of this extraordinary woman. You are in my thoughts and prayers.

Faye Jacobs Cohen
August 1, 2016
This is such a tremendous loss to our community. I feel so blessed to have known her and witness her energy, leadership and her great sense of humor--a true role model. Our sincere condolences to all of the Smith family.

Pam and Jonathan Martin
August 1, 2016
I have worked at Dana-Farber since 1999, and have seen up close the great work Mrs. Smith and her husband have done for cancer research and care on so many levels. Her decades of devotion will live on in the thousands of individuals and families facing cancer and related diseases who have been helped by her efforts. May her name be a blessing and may her family be strengthened by memories of her love, devotion, and example.
Saul Wisnia
August 1, 2016
To the entire Smith extended family, my deepest sympathies in the loss of your beloved wife, mother, mother-in-law, grandmother, great-grandmother, sister and aunt. Susan was a gift to you all and to our entire community. her beautiful smile and generous heart will be so very sadly missed. With deepest sympathy, Sandi and Geoff Fenwick
August 1, 2016
We are in shock and so sad. We send our love and condolences to Dick and all of Sue's family. We cannot imagine a world without Sue. She lead by example and inspired 3 generations to get involved in philanthropy and most importantly, to stand up to cancer! She was a visionary and leaves a legacy for us to honor and support -- Dana Farber's Susan F. Smith Center for Women's Cancers. But Sue's presence will be missed.
Debbie and Bob First
August 1, 2016
PLEASE ADD MY NAME TO THE LIST OF FRIENDS WHO SHARE THEIR BEST WISHES TO DICK, ROB, DANA AND THE REST OF THE WONDERFUL SMITH FAMILY. YES, INDEED , SUSAN WAS A LEADER IN THE BOSTON COMMUNITY AND THE SMITH FAMILY AS WELL. DAVID AND ROB ARE THE BETTER FOR THE LOVE AND GUIDANCE PROVIDED BY JANE AND SUSAN. ALL MY LOVE TO ALL OF YOU . AS ALWAYS

JAY FIALKOW, NEWBRIDGE ON THE CHARLES, DEDHAM
JAY FIAKOW
August 1, 2016
Smith, Knez and Berylson Families:
Heartbroken for all of you over the loss of your dear mom, wife, grandmother and great grandmother. She was a role model for so many of us and one of the most courageous and elegant woman I've ever met. Sending such heartfelt thoughts to all of you and so much love and prayers during this difficult and sad time.
Beth Miller
July 31, 2016
Showing 1 - 12 of 12 results