Buck was born on Jan. 28, 1920, in San Rafael, Calif., to Berrien and Corona Anderson. Buck and his three sisters enjoyed an active outdoor lifestyle. They rode horses, played tennis, skied, and spent many summer days on the beaches of Point Reyes. He attended high school at the Hotchkiss School in Connecticut. Buck began flying lessons when 14 years old (unknown to his parents) and floated the Amazon River in Peru with college friends when 20 years old.

Buck graduated from Harvard University in 1942 and immediately joined up to fight in World War II. He served as a Naval officer and pilot stationed in the Pacific Theatre and was awarded the Bronze Star and a Purple Heart. He served as an officer aboard the U.S.S. Walke (DD 416), a destroyer that was sunk during the Battle of Guadalcanal. He was rescued after 18 hours in the water; many of his shipmates did not survive. Buck attended annual reunions with the survivors of the U.S.S. Walke for many years.

After the war, Buck worked for Matson Navigation in Hawaii, and then for the Bank of California in San Francisco. In 1950 he married Marcia Willd Smith. Buck's family owned the Diamond A Ranch in Sonoma, Calif., from 1938-1961, and he helped out with the Brahman cow-calf operation whenever he could. In 1960, Buck and Marcia realized a long-held dream by purchasing the Climbing Arrow Ranch in southwest Montana. An avid skier, Buck was one of a group of Gallatin Valley ski pioneers who expanded the early Bridger Bowl ski area. Buck's Run was named for him during his tenure on the Bridger Bowl Board of Directors.

Buck enjoyed many years overseeing the operations of the C.A. Ranch. He loved to host family and friends on the ranch and never tired of checking on his cattle, following cattle prices, and worrying about ranch matters. He enjoyed pack trips in the Sierras and Yellowstone, canoe trips on many of Montana's rivers and lakes, sailing excursions, and extensive travel to numerous countries with Marcia.

Buck was preceded in death by his son, Trig; by his three sisters, Betty Wilkins, Mary Lakusta, and Florence Gibson; and by two nephews. He is survived by his wife, Marcia of 62 years; children Anita, Kathy, Page (Julie), and Frank (Meg) and his six grandchildren, Katie and Kristin Sherwood, and Maria, Andrea, Jackson and Elizabeth Anderson, all of the Gallatin Valley. Buck is also survived by 12 nieces and nephews.

The family would like to thank Buck's home caregivers (Joe Weyer, Becky Copenhaver, and Matt Balyeat) who made it possible for him to stay at home for many years and took him for frequent drives so he could continue to enjoy, and keep an eye on, his ranch. The family also wants to thank the staff of Elsie's Assisted Living and Hospice of Southwest Montana for their very kind and compassionate care over the last two years. Each of you added to the quality of his life during difficult years by the connections you made with him.

Condolences and memories may be shared with the family at www.dahlcares.com.
Published by Bozeman Daily Chronicle on Jul. 13, 2012.
To plant trees in memory, please visit the Sympathy Store.
MEMORIAL EVENTS
To offer your sympathy during this difficult time, you can now have memorial trees planted in a National Forest in memory of your loved one.
Funeral services provided by:
Dahl Funeral Chapel
MAKE A DONATION
Please consider a donation as requested by the family.
MEMORIES & CONDOLENCES
15 Entries
I'm very sorry to learn of Buck's passing. I will fondly remember visiting Buck and you, Marcia, in Borrego Springs, and the opportunity to visit the ranch and meet the your wonderful family. God Bless.
Patrick McKrell
August 1, 2012
Dear Marcia, Anita, Kathy, Page and Frankie,
We were all so blessed to be able to share our childhood with your family. I had no idea about his honorable service in WWII. So amazing.
Christana Gnehm-Boyle
July 27, 2012
My heart goes out to all of you for your great loss. What a wonderful man Buck was. My how I will cherish the fun times I had with him when he'd take me on "tours" of the ranch. Please know, you are all in my thoughts & mostly prayers!! Debbie French
July 24, 2012
I worked 9 years on the CA ranch. Buck Anderson is one of the men who have impressed me most in this life. Words cannot express the respect I hold for him. God bless the Anderson family.
Ken Mills
July 20, 2012
Sorry to hear of Buck's passing. My father and I fished at the ranch many times and enjoyed his hospitality. He will be missed.
Peter Higman
July 17, 2012
My deepest sympathy to you Marcia and your family.Working at the Sport Chalet for so many years, I had always enjoyed waiting on the Anderson family. I always thought that Buck was a class act.

The fondest memories of my youth contain the presence of Uncle Buck and you, plus Uncle Chuck, Aunt Polly and their kids, and of course my own family. We were all members of a truly remarkable extended clan where no event seemed quite right unless some from each family were present. Ours was a full and complete life style more than a series of get-togethers, and it has left an indelible mark on us all. Very few people will ever experience the sort of connectedness we are all so familiar with.

All too soon we will have only memories of an amazing life that very few have known or could possibly believe was real. Uncle Buck was a central figure to it all. And when Aunt Marcia passes (and only many years from now I pray) the very last mold and matriarch of an entire era will be gone.

You are all in my thoughts.
Dave Vaughan Jr.
Dave Vaughan
July 16, 2012
We would love to see you in July or August. We are so sorry to hear about Buck. He was a great guy. He will be be in Heaven with Dad!

Bill Anceney
July 15, 2012
I had the honor of working for Buck on the CA as a young man right out of college in 1977. Marcia and family please know that you are in my thoughts and prayers at this difficult time.
Greg Wallace
July 15, 2012
Dear Marcia, Thinking of you at this time of your great sorrow. With sympathy Jean Sullivan
July 15, 2012
It was my pleasure to have met Buck while doing some work for him at the ranch. I asked him if that old railroad bed was a part of the “Jawbone”, an old time Montana railroad. He was really quite surprised I knew of it and we immediately set off in my truck for him to give me the full dime tour of it and the rest of the place. It was quite a thrill for me to drive him around and learn some of the the history of the CA. Being a ranch-raised 5th generation Montanan, we easily conversed in the common language, “Cow Talk”, and I will forever remember that wonderful afternoon. What a good man. RIP Buck! My condolences to Mrs. Anderson, Kathy, Page, Frank and all the family.
John Darham
July 13, 2012
My sincered sympathy to you & your family.
Karen Kempt
July 13, 2012
To a great friend. Memories are a tribute to a fine husband, father and friend.
Bill Merrick
July 13, 2012
It was a honor to be a part of Buck's life as a caregiver. He was truly an amazing person.
Joe Weyer
July 13, 2012 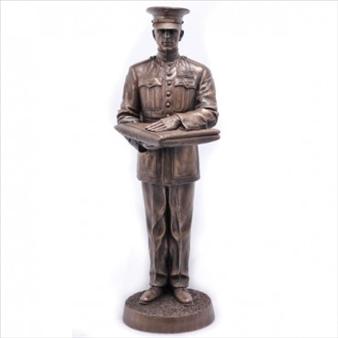 I wish to extend to you and to members of your family my deepest sympathy on your loss. May the Lord's loving promises comfort you and give you strength as you walk through this difficult time. On behalf of a greatful nation as an expression of appreciation for the honorable and faithful service rendered by your loved one. “Honoring Those Who Served-Ministry”. (If you wish a personalized memorial card mailed to you with history of playing of taps, 21 gun salute, meaning of each fold of the flag as a keepsake, please mail address to where the card is to be sent to: Chaplain Richard Reuer, 1206 6th St SW, Minot, ND 58701. This is a free service to fallen veteran families.)
Chaplain Richard Reuer
July 13, 2012
Showing 1 - 15 of 15 results