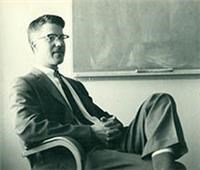 BORN
1923 – 2017
David Van Vranken Wend passed away in his sleep at his home Monday evening, Jan. 23, 2017. He was born in Poughkeepsie, New York on Oct. 18, 1923. He is survived by his wife of 63 years, Alice Burke Wend, and his children Chris, Eleanor, and Henry and grandchildren Tara, Erica, Alex and Sam. His brother Jared, sister Kate, son Jerry and Grandson Jeff preceded him in death, but he is also survived by half siblings George, Gertrude, Dorothea and Nadia. He lived his long life in his own way, and along the journey enjoyed the bounties of the American West to their fullest.

David was the son of Milton and Elizabeth (Scudder) Wend. Wend grew up in Albany, New York. As a child, he barely survived meningitis and severe secondary infections (without the benefit of antibiotics) that subsequently deprived him of much of his eyesight. Family legend has it that he met Eleanor Roosevelt as a boy. He is a graduate of the Albany Boys Academy and Hoosac School. He matriculated at the University of Michigan and was a Wolverine through and through. He definitely owned (and wore!) a raccoon fur coat, and loved to reminisce about Tom Harmon and Michigan's "Fighting One Hundred" marching band. During the Second World War, he volunteered at the Lake Placid Club, running the canoe and boat dock for convalescing veterans. An accomplished pianist, he studied under Stanley Hummel and was a lifelong student of classical music.

His true home was in the mountains, however, and his subsequent career led him West. Crisscrossing the nation in his beloved 1941 Ford during the late 1940s, he was a visiting professor in mathematics at Reed College in Portland, Oregon. During this time, he hiked and skied his way across the Cascades and Rockies, including the portion of Mount St. Helens that no longer remains. He returned to Michigan, completing his dissertation, "Branched Regular Curve Families and Finite Asymptotic Paths of Analytic Function," in 1955 under the direction of Wilfried Kaplan. It was during this sojourn in Ann Arbor that he met and married the woman who was to be his partner in crime for the next 63 years: Alice Virginia Burke. They married in 1953 and moved to Ames, Iowa where he took up a mathematics post at Iowa State University. Of his time in Iowa, he noted that there was a large road sign in the middle of Ames that said "You'll like Ames," though one had to say that through gritted teeth. Wend left Iowa State and the flat lands in 1955 and moved his family to Salt Lake City, where he stayed for 11 years. Among his memories of his time at the University of Utah was his ability to teach morning classes, and then go up to ski in the afternoon. He recalled, "I got in more runs in two hours than I could during an entire weekend." He also loved to regale his family and friends with stories of the mountains in Utah, especially his story of camping at above 10,000 feet in the Uinta Mountains in August during the late 1950s and viewing meteor showers in the crystalline night sky.

In 1966, he found paradise. Applying for various mathematics jobs (as he liked to point out, in those halcyon days of the post-Sputnik scare, a math professor could send out 10 applications and get 10 job offers), he visited Montana State College in Bozeman. Upon his return to Salt Lake City, he announced to his family that he had found just the place to live. Bozeman had just voted to open up an airport, and the town still basked in its distinctive locality: "more cattle than people" David observed. The Wends were parishioners for decades at Livingston's tiny St. Andrew's Episcopal Parish. Despite the adventurous drive to Livingston in the pre-interstate era, Alice and David truly delighted in the company of many a true Montana original in Livingston.

David taught at Montana State University from 1966 until his retirement in 1991. He was promoted to full professor, authored and co-authored numerous academic papers, particularly on linear and nonlinear differential equations. David was a true educational professional who rewrote his lecture notes and worked out all of the problems the night before teaching class right up to his retirement. He authored solutions manuals and routinely sent in corrections to mistakes he had found in the textbooks to the authors. One favorite story comes from a former student who had obtained liquid nitrogen and took the opportunity to freeze all of the chalk in David's classroom prior to the beginning of class. Professor Wend arrived and proceeded to attempt the beginning of his lecture only to find that the chalk would not write on the board. He tried each piece of chalk with no success. Not to be thwarted, he produced his own piece of chalk from his pocket with a comment about the poor quality of the existing chalk and proceeded with the lecture. Always available to work with students, there is a long list of former students who have been quick to step up and include Dr. Wend in their list of influential professors.

As always, he found time to fulfill his passion for mountain climbing. One of his stories included dropping his first grader son Chris off for school at the one-room Anderson School. He then had time to drive up Hyalite Canyon, climb Hyalite Peak, and make it back in time to pick Chris up from school at the end of the school day. Pretty sweet! Alone or with his family in tow, and always accompanied by the menagerie of odd hounds that habituated the Wend household, he managed to climb most of the substantial mountains in the Bozeman area. These hikes included a memorable hike up Hollow Top in the Tobacco Roots where he and the Wend-family dog "Butch" encountered a large bear at the summit. Beginning in the 1990s, David and his wife Alice split their time between Alice's family home in North Manchester, Indiana, and Bozeman. However, David always made sure to leave Indiana, as he put it, "when it stopped being human weather and started becoming corn weather." They maintained their residency in Montana, and moved back permanently to the family abode on Harrison Street in 2006. Even in his later years, David retained a sharp wit and an understated sense of humor. One of his last words came a mere week before his death, when he told two of the therapists helping him prepare for bed that "If I had known you were coming, I would have baked you a cake."

Supremely uninterested in accumulating material wealth, David Wend was a humane, compassionate and brilliant man, whose inexhaustible store of patience, good humor and even temper helped him successfully raise his children in the generational maelstrom of the 1960s and 1970s. Over the years, together with his wife Alice, David provided a safe haven at their 18 West Harrison house to numerous young people and wayward cats and dogs with no other place to go. His gentleness, generosity of spirit, sharpness of wit and overall decency were his hallmarks and will be sorely missed.

The memorial for David Wend will be held Saturday, February 18 beginning at 11 a.m. at St. James Episcopal Church, 5 West Olive Street, Bozeman, Montana.
Published by Bozeman Daily Chronicle on Feb. 5, 2017.
To plant trees in memory, please visit the Sympathy Store.
MEMORIAL EVENTS
To offer your sympathy during this difficult time, you can now have memorial trees planted in a National Forest in memory of your loved one.
MAKE A DONATION
MEMORIES & CONDOLENCES
2 Entries
What a lovely tribute to your wonderful father. There was so much in here that I did not know about David. Makes me proud to have a connection to such a caring man. Dorothea (Dorcey)
Dorothea (Dorcey) Rose
February 20, 2017
Mr. Wend, as I always called him, was larger than life. A man like any other. Las of an amazing breed. My deepest condolences to Alice, Chris, Eleanor and Henry. -Greg Saunders
Greg Saunders
February 5, 2017
Showing 1 - 2 of 2 results