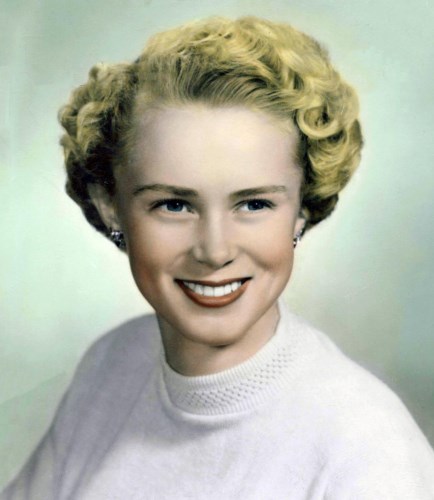 Diane lived in Fairfield, Montana on a dairy farm on Freezout Lake. Known as Young's Corner, Diane helped around the farm but was known more for her love of riding horses. The family was forced to sell the dairy farm by the Fish and Game Department. Diane was devasted and described it as "one of the worst times in my life." Unbeknownst to Diane, a young Choteau boy named Harold had been riding his bike past that corner keeping an eye on her. Harold finally caught her, and this led to a beautiful marriage that lasted for over 66 years.

Diane was an outstanding student, known for her incredible voice and her ability to play five instruments. She starred in school plays, marched in the band, and sang in the church choir and at many weddings. She was vivacious, witty and a practical joker, a skill she refined all her life. Diane and several friends started the singing group, Carrier Pigeons. They would compose a personal ditty for the unknowing victim, then dressed in bird costumes, run in and surprise everyone by singing and dancing as Diane played a ukulele. She also was in Sweet Adeline's and was the lead in several plays in the Bozeman area.

Diane was a fixture at the Bozeman train station employed by Amtrack where she worked for many years. Every morning, regardless of cold and snow, all 5' 1" of her would walk the tracks to roust anyone sleeping in the cars and clearing them out. When the station closed, she was transferred to Livingston for several years until retirement.

Diane was smart, opinionated and kind. Always a champion of people less fortunate. If it were buying Christmas gifts for a family who could not afford gifts or making Thanksgiving dinner for a family and leaving it on the doorstep, she was there for you. She cared for her close friend in assisted living, and the elderly woman without any family. She was always standing up for those that could not stand for themselves. Her altruism was a side of her that she kept to herself, never wanting acknowledgment for her good deeds.

Diane was diagnosed with Multiple Myeloma at age 52 when they were just beginning to do stem cell transplants. She was one of the first to receive this treatment at Stanford and after going through a brutal regimen of experimental drugs and stem cell transplants, she was cancer free for many years.

And then there are the Bobcats. The ultimate booster, she was always raising money, hosting players in her home, and never missed a home game even while struggling with cancer. She was a fixture courtside, cheering and let the refs know what she thought of their calls, particularly against the Cats.

In lieu of flowers, do something kind for someone and you can contribute to any cause of your choice (as long as it is the Bobcats).