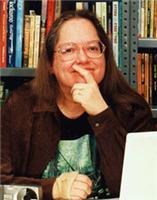 BORN
1955
DIED
2014
Award-winning author, Elaine Marie Alphin, passed away on Aug. 19, 2014, at her home in Glenrock, Wyo. She was born Oct. 30, 1955, in San Francisco, Calif., the daughter of Richard E. and Janice (Toler) Bonilla. She was raised and educated in San Francisco, Savannah, Ga., New York City, N.Y., and Houston, Texas. She attended Lafayette Elementary School in San Francisco. Then the family moved to New York City, where she attended William H. Carr Junior High School. After that, the family moved to Houston, and she attended and graduated from Westchester High School in 1972 and went onto Rice University in Houston where she received her B.A. degree. She attended and received her M.A. degree from York University in York, England, after competing for and winning a Watson Fellowship. In the 1970s and 1980s she wrote over 200 articles for various periodicals. She was married to Arthur B. Alphin on May 9, 1982, in Fort Belvoir, Va. They lived in West Point, N.Y.; Madison, Ind.; Bozeman, and in Glenrock, Wyo. since July 2010.

The author of numerous books for children and young adults, Alphin knew she was going to be a writer before she could even read or write. On early morning walks with her father in San Francisco, she listened to the stories he told, and made up stories to tell him, realizing then that she wanted to spend her life making up stories. Although she started out as a journalist in Houston, a tip from her husband, Arthur, drew her to writing for children. She wrote her first children's book in 1989 and finished her 33rd book in 2011. She was a longtime member of the Society of Children's Book Writers and Illustrators and had been an instructor for the Institute of Children's Literature in Connecticut for several years.

Although adults occasionally asked when she was going to grow up enough to write for them, Alphin explained why she loved writing for young readers instead: "I always wanted my writing to challenge readers to question their assumptions, and I discovered that a lot of grown-ups don't really want to question their assumptions. They've made choices and compromises in their lives, and they want to feel comfortable about them. But young readers are still finding out who they are, like I am, I guess. They're the perfect audience for me because they want to consider new ideas in order to decide for themselves which ideas they agree with and which they don't, and work out how they want to live their lives."

Alphin was extremely generous with her knowledge and providing feedback for fellow writers. A champion of writing, she inspired countless writers and readers throughout her career, always ready to share her knowledge of and enthusiasm for writing. For those unable to hear her speak in person, Alphin wrote one book for adults, Creating Characters Kids Will Love, about writing for young readers. In addition to writing, Alphin was an avid reader and enjoyed stories through film and on the stage. She had a contagious, hearty laugh, and loved to share good conversation and meals with friends. Members of her various writing groups fondly remember her childlike enthusiasm for life and stories, discussing books and the writing process, and making time for writing retreats, movies (with popcorn!), holiday parties, and getting together for pancakes or book shopping. She also loved Bozeman.

On Aug. 7, 2011, she had a stroke, which ended her writing career. From that point, she was cared for by her husband, Arthur, who provided endless dedication. Writing was Elaine's passion and life, and she was Arthur's love of life and mate for life.

Elaine is survived by her husband, Arthur Alphin, of Glenrock, Wyo., and her parents, Richard and Janice Bonilla, of Poteau, Okla.

Visitation will be held at 1 p.m. on Sept. 24 at Dokken-Nelson Funeral Service, with a service to begin at 2 p.m. Interment will follow at the Sunset Hills Cemetery in Bozeman. To view Elaine's service online, please visit: http://webcasts.lifetributes.com/524583.

Arrangements are in the care of Dokken-Nelson Funeral Service, www.dokkennelson.com.
To plant trees in memory, please visit our Sympathy Store.
Published by Bozeman Daily Chronicle from Sep. 17 to Sep. 21, 2014.
MEMORIAL EVENTS
No memorial events are currently scheduled.
To offer your sympathy during this difficult time, you can now have memorial trees planted in a National Forest in memory of your loved one.
Funeral services provided by:
Dokken-Nelson Funeral Service
GUEST BOOK
0 Entries
Be the first to post a memory or condolences.