BORN
1930
DIED
2012
Renowned artist Larry V. Zabel lost his valiant battle with C. M. Leukemia and has gone home to be with his Lord. Larry passed away Sept. 11, 2012 at his home up North Meadow Creek near McAllister, Mont. Larry was born on Jan. 19, 1930 at Deer Creek, Minn., to Esther (Peterson) and X. Y. Zabel. His early years were spent happily on a farm near Deer Creek where he and his sister Beverly attended a one room country school. Larry & Bev's Mother was an accomplished artist and encouraged the obviously gifted Larry to draw and paint from the age of 3 years.

In 1938, the family moved to California where Larry attended schools, graduating from Anaheim Union High School in 1947. (He was inducted into that high school's Hall of Fame for distinguished graduates in 2010.) Larry joined the United States Navy and served for over three years. He then furthered his education at U.C. Santa Barbara, the University of the Americas in Mexico City and graduated from Long Beach State.

Larry went to work for Douglas Aircraft Corp in Oklahoma and California as an illustrator and writer, and later for the Genge Corp., eventually moving to a Civil Service position at the China Lake Naval Weapons Test Facility as Director of Technical Information. During those years he continued to paint. He was sent to Vietnam several times to film the use of Naval weapons and to gain reference material to produce a series of combat art paintings for the Navy, which can be seen at the Naval Archives Center in Washington D.C. After completing his 20 years of government service, he decided to retire and pursue another career as a western "cowboy" artist.

Larry and his wife, Sharon moved to Montana where they purchased property on North Meadow Creek about 25 years ago. Eventually some of their family and a number of friends followed them here, including his life-long friends, Bob and Dixie Gates.

Before long, Larry was making a name for himself producing paintings of Montana scenery, its ranchers, their ranches, the native peoples, and the wildlife. His paintings now hang in many public and private collections all the way from government offices in Washington, to the West Coast. Larry was extremely generous with his acknowledged God-given talent and contributed to countless worthy causes and fund-raising efforts including the Rocky Mountain Elk Foundation, Madison Valley Ranchlands Group, The Madison River Foundation and The Madison Valley Medical Center.

In recent years Larry and Maureen have enjoyed a life split between Montana, Wash. D.C. and Morro Bay, Calif. They enjoyed a couple of marvelous trips to Kenya, Tanzania, and recently South Africa.

In lieu of flowers, the family suggests contributions be made to the Madison Valley Medical Center Foundation. The family is very grateful for the support and care provided by the staffs of Deaconess Hospital in Bozeman, The Madison Valley Medical Center, Hospice lovingly provided by Mary Carlson, and especially the amazing personal care by Dr. Robert Marks.

As Larry would proclaim to everyone: It has been a Truly Great Ride!!

Cremation has taken place with K & L Mortuaries in charge. There will be a memorial service at Journey Church in Bozeman on Friday, Oct. 26, 2012 at 1 p.m.
Published by Bozeman Daily Chronicle on Sep. 16, 2012.
To plant trees in memory, please visit the Sympathy Store.
MEMORIAL EVENTS
To offer your sympathy during this difficult time, you can now have memorial trees planted in a National Forest in memory of your loved one.
MAKE A DONATION
MEMORIES & CONDOLENCES
17 Entries
Dear Becca, I was just thinking of your Dad yesterday and the story he told me of when he and Bob capsized their boat coming down the Missouri
john cipollone
September 11, 2019
Sorry to hear of your fathers passing he was a very nice man. And a great artist he will be missed greatly mike and teresa barbao
October 11, 2012
Larry was a generous man he always gave to the love Drift Gallery. Thank you to and rest in peace
Patsy Siaperas
October 5, 2012
Dear Steve and Becca,Sorry to hear about your Dad.He was a good friend.Thank God he left so much behind to remember him by.
John Cipollone
September 30, 2012
Condolences to Steve and Becca, Larry was an original. My first memory of Larry was Sharon bringing him over to my folks to get their 'approval' of her new beau. My folks loved him dearly and for 40+ years, he was one of my heros. RIP and the Lord got a special follower this month!
Kathryn Grisham-Gray
September 25, 2012
To quote Jack Connell, "The Nation just lost a great American, the Navy lost one of its greatest supporters, China Lake lost an icon, and we all lost a good friend."
CAPT Doug Henry
September 21, 2012
Oh Becca, my heart goes out to you. I'm just so glad your dad was able to be home to saddle up for his next journey. Hugs from Annie Ley.
September 21, 2012 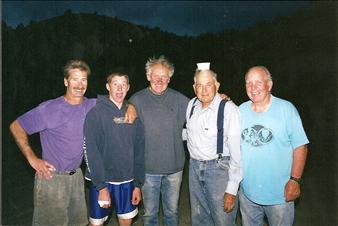 My heart goes out to all of Larry's family and friends. Larry was one of the kindest,caring,generous and talented men I have ever known. I have known Larry since I was a child and he touch my live in ways that no one else has. His spirit will always be with me and I will think of him each time I look at one of his captivating paintings. God bless all of his family and friends and be comforted knowing he is with God and the many family and friends that have gone before him!
Jacqui Munson
September 18, 2012
My family new and loved Larry very much. We have his beautiful Paintings to look at and remember his gift he shared with us. Rest in peace friend we will all see you someday again.
Easter Family
September 18, 2012 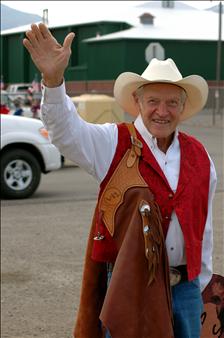 So very sorry to hear of the passing of this great artist and great man. I have been a big fan of Mr. Zabel's art and I have had many of his prints on my walls for many years. I always enjoyed meeting Larry. He always had time to stop and say hello and look you in the eye. He was an asset to the world of western art and to the state of Montana. Thoughts and prayers go out to the Zabel family and all of his many friends.
Michael Flaherty
September 18, 2012
Steve & Becca so sorry to hear about your loss. Your dad was such a caring man and I will remember him fondly forever.
Stephanie Ridley (Hampton) Romsa
September 18, 2012
To all of Larry's family, Our deepest sympathy at his passing. We will always cherish the memories of seeing Larry, didn't matter where, and he would always have a big smile and a warm hug for all of us. Dodie & Vurnie Barnett and all of the Knowles family.
Vurnie Barnett
September 17, 2012
Thank you, Larry, for being such a loving friend and neighbor to my dad Archie. I remember the joy you and Sharon and the "kids" brought to our belated wedding party on the ranch and still have the lovely notes you both wrote in our guest book.

I will also always cherish the loving creativity you invested in Dad's memorial service. Your words and images always make me both laugh and cry. I'm so glad I got to see a bit of home through your eyes.
Irene Germann Wiener
September 17, 2012
Becca & Family,
Dee Ann and I think of Larry as a true friend. He will be greatly missed by those of us who were lucky enough to have known him. He was a kind,sincere, considerate, compassionate and to say the least a generous man. I considerate it a privilege and honor to have known him and to be able to call him a friend. Our thoughts and prayers are with you all!
Sam Sneed
September 16, 2012
Larry will be missed. He was a good neighbor to my father Archie and a kind and decent man. Our condolences to his family.
Frank and Cathy Carey
September 16, 2012
Rest in Peace Larry. Thoughts and prayers go out to all the family. You were a true friend and will never be forgotten. Sincerely, Shane Brozovich
September 16, 2012
I was blessed to know Larry since I was a small child. He was a wonderful friend to my parents and I am glad they are all back together in a peaceful place, free of pain and worries...May Godless his family and many friends
Julie Tidwell
September 15, 2012
Showing 1 - 17 of 17 results