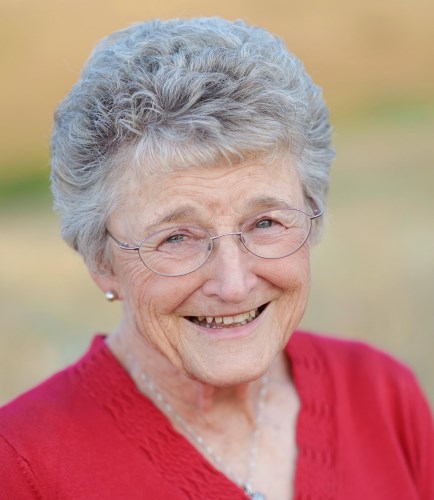 She was born Marilyn Marie Miller on July 27, 1930, in Sharon, Pennsylvania, to Charles Ernest Miller and Flossie Waneta Warncoth Miller. Her father left when she was young, and by the time she was eight, she and four siblings were taken from her mother in Colorado and placed in a Denver orphanage.

She was adopted, along with a younger half-sister, by Howard and Esther Robb, an older couple from Rocky Ford, Colorado. Unfortunately, most of her childhood with the Robbs was very challenging. She was always grateful for the neighbors, teachers, and church members who helped her during that time-in particular Mrs. Sakamoto, who became a lifelong friend.

In high school Marilyn was very active in 4-H, winning a trip to the National 4-H Congress in Chicago, Illinois. She graduated from Rocky Ford High School in 1949, then attended a Mennonite college in Heston, Kansas, for a year-graduating from Southwest Baptist College in Bolivar, Missouri, with a teaching certificate.

On August 28, 1953, she eloped with Gerald (Jerry) Robertson, whom she had met through 4-H. Jerry was in the Navy, stationed in Alameda, California. After his commitment to the Navy was fulfilled, they both attended Colorado State University where Marilyn obtained a degree in Home Economics and Elementary Education. She taught school to help support their family while Jerry completed his Doctorate in Veterinary Medicine.

In June of 1961 they moved to Bozeman where Jerry had a one-year contract with Bozeman Veterinary Hospital. The stars aligned and they never moved from the Gallatin Valley. During their early years in Bozeman, Marilyn was a stay-at-home Mom, volunteering as a Camp Fire Girls and 4-H leader. She eventually became the office manager/bookkeeper at Jerry's clinic.

Religion was important to her, being an active member of the First Baptist Church and later the United Methodist Church. She was elected president of the National Auxiliary of The American Veterinary Medical Association, after serving as president elect and four years as treasurer. She also held every office in the Montana Auxiliary. She was proud to be part of the P.E.O. sisterhood and treasured their "Over the Hill Gang" (Wayne and Marcia Edsall, Ed and Laura Hanson, Bill and GiGi Prunty) who met for dinner at least once a month for over 50 years.

She was the loving mother she never had, as well as a doting grandmother. She traveled to Winnett to watch her "King Kids" participate in basketball, music programs, and 4-H activities. She and Jerry followed the "Robertson Boys" as they competed in rodeos, always bringing her famous "Grammie Cookies."

She was her family's head cheerleader and will be greatly missed. A private Memorial Service will be held later.

Memorials can be made to the Marcia Edsall Scholarship Fund and sent to Montana Community Foundation, PO Box 1145, Helena, MT 59624 (online at mtcf.org) or the charity of your choice.