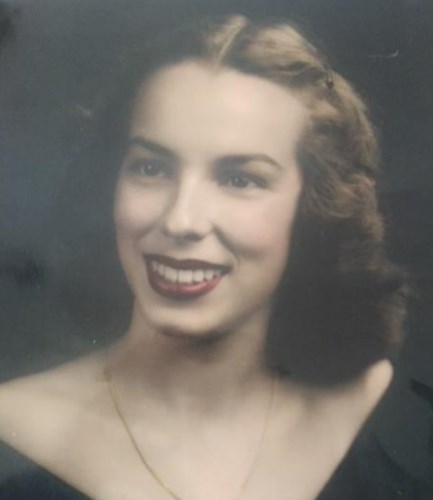 Cremation has taken place and a memorial service will be held at 1:00 p.m. Saturday, November 20th, at St. John's Episcopal Church, Emigrant, MT with a Celebration of Life and Committal of the ashes to follow at the family summer home (Wiki Up), 3.8 miles south of Emigrant. Hors d'oeuvres will be served, and per Martha's wishes, accompanied by "only Red Wine."

Martha was born June 27, 1928, in Sylvan Lodge Hospital, Glendale, CA to Malcolm and Rose (Ashby) Story. She was joined four years later by brother Peter Reinald Story. In 1933, at the age of five, the family moved to the ranch in Emigrant, MT.

She attended school at Mountain View, a one room schoolhouse in Emigrant, MT, until the 6th grade, Emerson Jr. High School in Bozeman until the 8th grade, and graduated from Gallatin County High. She started at Montana State College in the fall of 1946 at the age of 18, where she met Douglas Ramsey Drysdale, 1st Lieutenant, US Air Corps, The Bloody Hundredth, B17 & P-51 Pilot. They were married June 7, 1947.

In December of 1949, Doug was recalled to the United States Air Force, and the couple moved to Kearney, NE, Austin, TX, and Travis AFB in California.

In May of 1951, Doug was sent to Korea. Martha returned home to Bozeman and obtained her teaching certificate from Montana State College.

In May of 1952, Doug returned from Korea, and the couple moved to the Salina, KS Air Force Base.

In August of 1952, Doug resumed his studies at the University of Montana law school, while Martha worked at the U of M Library.

The couple's first child, William Ramsey Drysdale was born in December of 1954. From 1955 to 1962, while living in Bozeman, the couple had four more children: Dulce Scott, Amanda Ashby, Rebecca Story and Sarah Hobson. Doug was practicing law, while Martha was a devoted, full-time Mother, busy with the children's activities, including basketball, football, cheerleading, skating, skiing, musicals, field trips, PTA, Winter Fair events, and insuring they didn't kill each other.

Martha enjoyed daily walks, skiing, bridge games, trap shooting and summers in Paradise Valley at the Wiki Up. She was active in her church, teaching Sunday school, catechism and singing in the choir.

In later years, as the children grew up and moved out, Martha's activities expanded to include a bridge group, book club, PEO, volunteering for the City of Bozeman Beautification Committee, and managing up to 40 rental properties that her mother Rose acquired. As always, she continued her daily walks.

Martha and Doug enjoyed wonderful years of space-A travel with the Air Force, traveling to England, Scotland, France, Germany, Yugoslavia, and the Czech Republic. They took the Siberian Express from Vladivostok to St. Petersburg, and the ferry from the Baltic to Berman. They also traveled to Australia, New Zealand, Jamaica, sometimes including their children. As always, they spent time in Paradise Valley at the Wiki Up for summers, holidays, and hosting family and friends from around the world. Martha was blessed with a rich life: 64 wonderful years with Doug, a diverse, loving, and ever-expanding family, dear friends, and warm relationships with nearly everyone she met.

Martha was preceded in death by her parents, Malcom and Rose Story, her husband, Doug, her brother, Peter Story and three infant siblings.

She is survived by her children, William (Tammy), Dulce (Tony Rolfes), Amanda, Rebecca (James Boyle), Sarah (TJ Eyer); nine grandchildren; 13 great grandchildren; the children of her heart, Peter and Heleen van Tienen-Driessen of the Netherlands; and her sister by marriage Eileen Story.

A livestream of the Memorial Service will be on the St. John's Episcopal Church, Emigrant, MT Facebook page: www.facebook.com/TheReverendKristinOrr.

In lieu of flowers memorial contributions may be made to: The 100th Bomb Group Memorial Museum https://www.justgiving.com/100bgmus or St. John's Episcopal Church, PO Box 176, Emigrant, MT 59027.