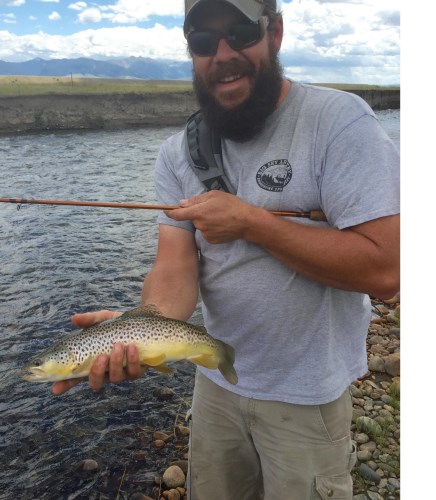 Phillip was born in Pensacola, Florida the third child of Frank and Judy Walker. From the beginning, Phillip was very intelligent and curious about everything. Living in the National Parks growing up, he faced both good and some not so good experiences which shaped his later life. Phillip and Missy Stone met at Lewiston (ID) High School and had two sons, Jacob, who was stillborn and Elyas Stone-Walker. He was married to Jennifer Johnson Walker for about 10 years and they later divorced.

While living in Bozeman, Phillip became an excellent carpenter, building a variety of apartment complexes, barnwood furniture and finished cabinets. He had his own wood shop in Belgrade and was very well respected for the quality of his work. Throughout his life, he became an expert fisherman, who could catch fish when no one else could. He seemed to inherently understand the water and where the fish were. Those same skills applied to hunting as well, getting his elk or deer almost every year. He attended Montana State University for a year, but found that his technical "hands-on" skills served him the best, as a carpenter, fisherman, hunter, rafter, boater, singer and dancer.

Even though he was scared of fireworks when he was little, he became very interested in the fireworks shows in Montana and became an important member of the Big Sky Fireworks team. He did the lead-off fireworks at the Montana State University football games for several years. Besides coordinating training and fireworks shows in Montana, he traveled annually to the Pyrotechnical Guild Institute gatherings and even accompanied his good friend, Ric Almendinger, to Liuyang, China, where the majority of the world's fireworks are made.

In 2017, he pulled up stakes and moved to Alaska, finding Homer as an excellent place to live. There, he met the love of his life, Crystal Marie Harrington. They were together for almost five years, marrying on the fall equinox in 2020. She was his "honey" and he was her "bee". While in Homer, Phillip continued his carpentry work and bought a used boat, fixed it up and taught Crystal how to catch salmon and halibut. He was always happy while fishing.

Phillip is survived by his parents, Judy and Frank Walker, his sister, Kathryn Walker all of Bozeman, Montana, his son, Elyas Stonewalker (Ashley), his grandson Dietrich Stonewalker all of Troy, Idaho, and by Crystal Marie and her three daughters, Natalie, Riley and Hannah, all of Homer, Alaska. Mark, Phillip's older brother and both sets of grandparents all preceded him in death. Cremation has taken place with his ashes to be scattered later.

A memorial was held in Homer on October 17. Another memorial will be held on Saturday, November 13 at 7 PM. This will be held at Big Sky Fireworks (7893 Hayfield Dr.) in Helena, Montana. Please join Phillip's family and friends as we celebrate his life.
Published by Bozeman Daily Chronicle on Nov. 11, 2021.
To plant trees in memory, please visit the Sympathy Store.
MEMORIAL EVENTS
To offer your sympathy during this difficult time, you can now have memorial trees planted in a National Forest in memory of your loved one.
MAKE A DONATION
MEMORIES & CONDOLENCES
0 Entries
Be the first to post a memory or condolences.