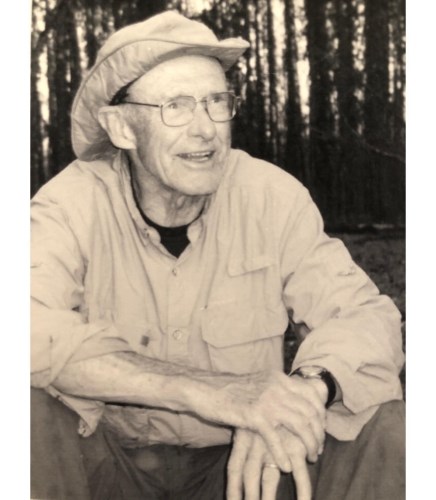 Bill was born March 6, 1927 in Chicago, Illinois to Irma and William Tietz Sr. Many of the summers of his youth were spent in Eagle River, Wisconsin with his grandparents and cousins exploring the Northwoods. During this time, Bill developed a deep and abiding love for nature and the outdoors. He fished for Muskie and Northern Pike in the lakes and raised falcons and hawks from injured fledglings to adulthood. Bill graduated from Hinsdale High in 1945, spent six years in the US Navy, and then earned a Bachelor of Science degree in zoology from Swarthmore College in 1950. While at Swarthmore, he ran on the track team where he set the school record for the 880-yard dash, a record that stands to this day. He earned a Master of Science degree, again in zoology, from the University of Wisconsin in 1952. After he graduated, Bill spent time in the Arctic studying the metabolism of small mammals, focusing on weasels, foxes and the occasional wolverine. He briefly worked at Baxter Laboratory in Illinois before pursuing his Doctorate of Veterinary Medicine from Colorado State University at Fort Collins in 1957, and a Ph.D. in Physiology and Pathology from Purdue University in 1961. He joined the faculty at Purdue as an assistant professor of veterinary physiology, but left in 1964 to join the Colorado State College of Veterinary Medicine and Biomedical Sciences as an associate professor of radiobiology and physiology. During his tenure at CSU Bill served many roles. He was appointed chair of the Department of Physiology and Biophysics in 1967, the Associate Director of the CSU Agricultural Experiment Station, CSU's Vice President for Student-University Relations in 1970, and finally appointed Dean of the CSU College of Veterinary Medicine and Biomedical Sciences. His time at CSU exposed him to student unrest, legislative lobbying and academic administration which set him up perfectly to become Montana State University's ninth President from 1977 to 1990.

Bill brought with him to the Bozeman campus a research-oriented vision, an abundance of intellectual and physical energy, the capacity to weigh and take risks, and both a determination to set new standards of teaching, research, and creativity, and the skills to institute them. At the time of his appointment as President, there was an eagerness on the Board of Regents to find, in the words of its Chair, Ted James, "assertive leadership, a strong prexy, and a representative who would effectively present MSU's case before the regents, the legislature, and the public."

In Bill Tietz, they found their man. From one month to the next, the campus was energized. He was everywhere at once, diving deep into the details of virtually every facet of the University and articulating his case for what changes were needed in a clear and forceful way. Aided by a small group of Administrators - VP for Academic Affairs Stuart Knapp, VP for Research John Jutila, Dean of Graduate Studies Mike Malone and VP for Administration Tom Nopper - who filled their positions at just about the same time, Bill Tietz transformed Montana State. Funds for a greatly-enlarged sabbatical-leave program (which raised morale at the same time that it attracted new talent) were found, the undergraduate Honors Program was revived and enlarged, a widely-imitated Writing Center was instituted, the MSU Libraries were brought up to national standards, a Core Curriculum was put in place, and an Advanced Technology Park to draw young entrepreneurs to the Gallatin Valley, engage students in real-world product development, and transfer technology to MSU's financial benefit brought into being.

After his retirement in 1990, Bill continued to serve both the local community and the state of Montana in ways too numerous to mention, as personally engaging as ever and always looking for new ideas to explore. He loved and spent much time with his family. For the past 23 years he and Gwen had many adventures in Montana's mountains, valleys and plains, as well as canoeing in and camping along great rivers in the American-Canadian West. He learned to ride horses in his fifties, continued his annual trips to the Canadian wilderness with cousin Clarence Sterns well into his eighties and took an active interest in politics, developments at MSU and his family. Bill loved animals and liked to watch 'his' birds and squirrels come to the window feeder, to see the grumpy bear that lived in the backyard woods and to visit the horses in the pasture. He was an avid woodworker, loved model trains and always had some pearls of wisdom to share over a beer.

He was at his greatest ease around family and close friends. Those who knew him best delighted in his company most - his quick wit, his lively interest in what they were up to, his concern for the welfare of others. He will be greatly missed by all of them, and his legacy preserved in and by the University he more than anyone else made great.

Bill was proceeded in death by his infant daughter Catherine, his parents Irma and William Tietz Sr. and his first wife Patricia.
Published by Bozeman Daily Chronicle on Jun. 21, 2020.
To plant trees in memory, please visit the Sympathy Store.
MEMORIAL EVENTS
To offer your sympathy during this difficult time, you can now have memorial trees planted in a National Forest in memory of your loved one.
MAKE A DONATION
MEMORIES & CONDOLENCES
0 Entries
Be the first to post a memory or condolences.