1928 - 2014 BRATTLEBORO Alice Elizabeth Mitchell Chapman, 85, of East Bonnyvale Lane, ended her journey on May 3, 2014, with her children by her side. She was born Aug. 28, 1928, in Plymouth, N.H., the daughter of Lester and Ethel Newton Mitchell. She was a graduate of the University of New Hampshire at Keene, N.H. with a BEd and MAT from Antioch Graduate School. Her teaching career began in Chesterfield, N.H. and continued in the Brattleboro area for 23 years, in fourth and sixth grades. During her teaching career, she enjoyed creating curriculum and integrating learning and hands-on experiences for her students. She retired in 1990 and continued in the field of education as a supervisor of student teachers for Norwich University and Vermont College from 1991 to 2001. She was a member of All Souls Unitarian-Universalist Church in Brattleboro, since 1950. Later, she joined the Floral Arts and Garden Club, Vermont Retired Teachers, and AARP. She was formerly married to Philip B. Chapman. They raised their children in Brattleboro. She enjoyed her family and is survived by a son, John M. Chapman and his wife, Debra, of Brattleboro; a daughter, Nancy A. Sprague of Brattleboro; grandchildren, John Chapman of Walla Walla, Wash., Elizabeth Gazo of Colchester, Vt., Tad Pritchard of Flagstaff, Ariz., and five great-grandchildren. She was predeceased by brothers, Harold N. Mitchell and Lester E. Mitchell; four sisters, Ruth Loring, Mildred Shepard, Lilla Sjostrand, and Arlene Horton, and a grandson, Tyler W. Chapman. She enjoyed life, in particular, her elementary school teaching, and supervising her graduate school students. She traveled to all 50 states as well as abroad, finding all rewarding experiences. She shared the bounty of her gardens with many. She enjoyed reading, researching her genealogy, quilting, knitting and other crafts, sharing the results willingly. A memorial service will be held at 3 p.m. on May 24, 2014, at The West Village Meeting House in West Brattleboro. In lieu of flowers, her wish was that donations be made to Rescue, Inc., 541 Canal St., Brattleboro, VT 05301, Brattleboro Area Hospice, 191 Canal St., Brattleboro, VT, 05301, or Pulmonary Rehab, 17 Belmont Ave., Brattleboro, VT 05301.
Published by Brattleboro Reformer on May 7, 2014.
To plant trees in memory, please visit the Sympathy Store.
MEMORIAL EVENTS
To offer your sympathy during this difficult time, you can now have memorial trees planted in a National Forest in memory of your loved one.
MAKE A DONATION
MEMORIES & CONDOLENCES
15 Entries
Just up the hill, along a little path when we were growing up, I remember her gardens most of all. And her smile. She showed me the jack-in-the-pulpits in the woods, and once there was even a very very prized lady slipper.
May 20, 2014
The legacy Alice left and the lives she touched, is a treasure for all. Over the years, she and her kindness remain in the forefront of my memories. Sincere condolences to Jack, Nancy and their families.
Maurice "Mac" Cheney
May 14, 2014
I am sorry of your passing. You were one of the greatest teachers I had. You will be missed by so many. Rip Alice Chapman
May 14, 2014
Alice Chapman was a wonderful member of the Brattleboro Floral Arts & Garden Club. She welcomed me into the club, shared plants and her garden wisdom. Our club is better for all her hard work and the plants she shared with us! She will be missed!

JilMac, Brattleboro Garden Club
Jil MacMenamin
May 12, 2014
Mrs Sprague,
I am very sorry to hear of the passing of your mom. I have great memories of her when she would come into our classroom, and then again as I grew up and she would come into the subaru dealership. I hope that the memories you have and hearing all the kind words of others will help you through.
Megan Rancourt
May 10, 2014
Jack and Debbie,
My sincere sympathy to you and your family.
With warm regards,
Sue Miller
May 9, 2014
Debbie and family, Please know that you are in our thoughts and prayers. We hope you find comfort in the wonderful memories that you will grow to cherish.
Karen & Marty Rancourt
May 8, 2014
God bless this amazing woman. Thank you for your contributions to my upbringing. I will always remember the positive impact you had on my life when I entered 4th grade. We did amazing things, such as disecting twigs and buds. We even launched an estes rocket. You encouraged us to sing and be good citizens. You let us watch the world series baseball games. Your classroom was a warm and inviting place. Of all my years in school, yours was the best. Thank you.
summer solstice
May 7, 2014
So sorry for the loss of your Mom. We enjoyed her visits and the sharing of her plants. She was always smiling and happy. She made you feel so welcomed when we visited. She had a full life and will be missed.
Rusty and Mary Loring
May 7, 2014 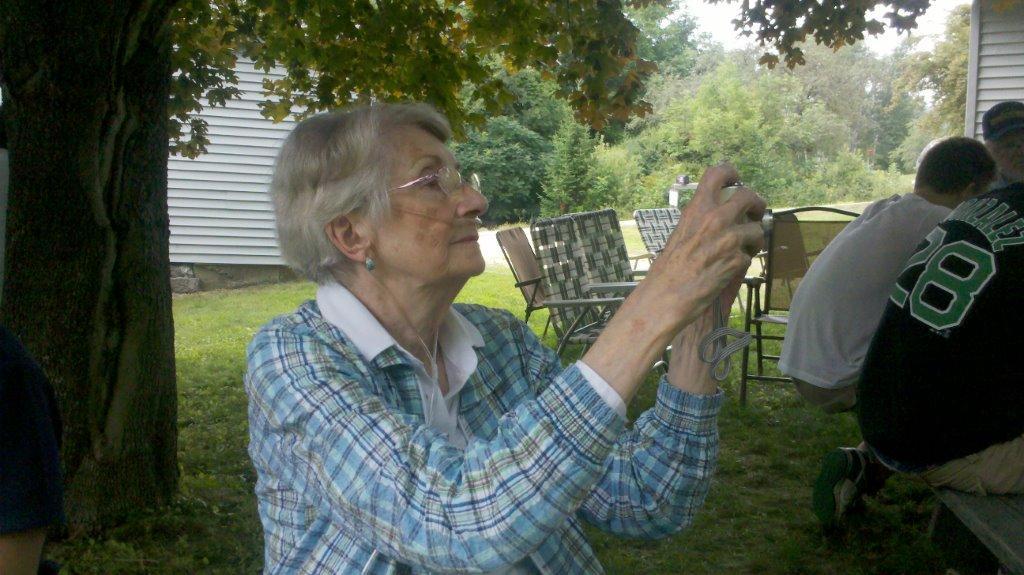 Aunt Alice will be long remembered for her quick wit and humor and the plants she shared (Hollyhock).She was always there for her sisters. End of a great elder generation my mother was one of.
My condolences Jack and Nancy
Stanley Shepard
May 7, 2014
Nancy and Jack,

My thoughts are with you. I had the chance to spend more time with Aunt Alice the last few years and really enjoyed it. I loved that she'd try a new cocktail when we went out for dinner. She had such a quick wit and didn't suffer fools at all. I enjoyed her curiosity and her acceptance of change whether she agreed with it or not. I loved her and I will miss her dearly.

Love, Pat
Patricia Legler
May 7, 2014
Ever the teacher, Aunt Alice was a life-long learner and encouraged that in others. I admired her curiosity, creativity and commitment to improving the lives of others. I have many fond memories of our visits, especially during family gatherings. My thoughts and prayers are with the family and her friends. May God grant you the strength to bear this loss and the peace and comfort to ease your sorrow.
Martha Rice
May 7, 2014
Grandma Alice was a very gracious hostess. I enjoyed staying at her home as a house guest. I will continue to remember her and enjoy the flowers she shared with me as they flourish in my garden!
Sandra Gazo
May 7, 2014
Nancy,
I am so sorry to read about your Mom, she was a lovely lady. My thoughts and prayers are with you and your family during this difficult time..
Lorraine Reilly
May 7, 2014
Alice was a lovely lady- always smiling.
I shall miss her.
My condolences to Jack and Nancy.
Fred Humphrey
May 7, 2014
Showing 1 - 15 of 15 results