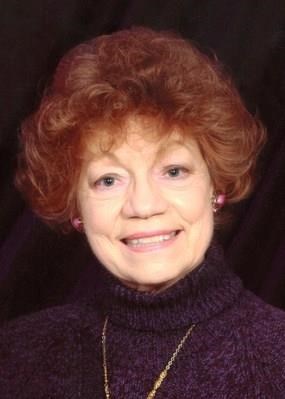 She was born March 16, 1941 in Bloom Twp., Seneca County to the late Burl L. and Barbara Luella (Meyers) Dunn. Barbara was the youngest of five which often had its advantages. She grew up always on the go and was very active at Bloomville High School, where she graduated from in 1959. Barb played clarinet in the band, sang in the choir, cheered at sporting events and loved socializing with friends. Following graduation, she received her hairstylist certification from the Warren Beauty Academy.

On September 18, 1960 she married Edward C. Dolch and they resided in Bloomville for a few years before moving to Bucyrus, where they would raise their family. No longer styling hair, Barb loved caring for her family as a homemaker and after her children were grown, a variety of jobs filled a need. Teller, Dr. office asst. and Insurance office asst. to name a few but her true passion was art. Barb loved producing any type of art and enjoyed demonstrating and selling her personal creations. Arts remained a constant for the rest of her life and she enjoyed many years spent at the Richland Academy of Arts, where she was always enhancing her experiences and creations.

Barb was an active member of the First Presbyterian Church, serving as a past Deacon, assisting with the Heritage Room, serving as a youth leader and was responsible for painting the Noah mural in the nursery. She was also a member of the Brush and Palette Art Club of Galion and "The Hatters that Matter" Red Hat Society. She was a longtime volunteer with the visitor's bureau, assisting with tours and she thoroughly enjoyed transforming to "Babbling Babs" where she would show off for guests at the Speak Easy productions.

She and Ed have traveled to many beautiful places in God's world and have witnessed some spectacular sunrises and sunsets. She's enjoyed following activities of her children and grandchildren and Barb also enjoyed dancing, biking singing, walking and floral gardening. Barb will also be remembered for her noodles, a recipe passed down from her mother-in-law and her wonderful pies.

In addition to Ed, her husband of 55 years, Barb is survived by two children, Andrea (Darryl) Rogers of St. Joseph, Michigan and Bruce (Anna) Dolch of Glenford, Ohio; three grandchildren, Ashley and Brittney Rogers and Mason Dolch; one brother, Philip (Darylene) Dunn of Bloomville and two sisters, Charlotte Maloy of Sycamore and Elaine (Robert) Levans of Bloomville along with many nieces and nephews.

She is preceded in death by an infant brother, Paul Lavere Dunn and a sister Esther Beard.

Her family will receive friends from 1-2 p.m. Saturday, February 20, 2016 at the First Presbyterian Church where her memorial service will begin that day at 2:00 p.m. with Rev. John Cory officiating. Barb will be inurned prior to services in the church columbarium.

Memorial contributions may be made payable to BORN and given through the Wise Funeral Service or at the church on the morning of her services. Memories are encouraged to be shared by visiting her Tribute Page at www.wisefuneral.com.

Published by Telegraph-Forum from Feb. 13 to Feb. 16, 2016.
To plant trees in memory, please visit the Sympathy Store.
MEMORIAL EVENTS
To offer your sympathy during this difficult time, you can now have memorial trees planted in a National Forest in memory of your loved one.
Funeral services provided by:
Wise Funeral Service
MAKE A DONATION
MEMORIES & CONDOLENCES
10 Entries
Barbara was such a nice lady and great painter. Such enthusiasm too!
Dave Petska
Friend
February 3, 2021
Barb Dolch - Kind, artistic, engaging, witty, always full of joy and laughter. She knew no strangers, she loved her family and treated everyone with respect and dignity. Her memory will always be with me. Bonnie Robinson
February 23, 2016
I am truly saddened by the news of the passing of Barb. Such a lovely lady and truly inspiring person. Prayers to those closest to her!
Beth Thompson
February 20, 2016
I will miss Barb's sweet spirit that is now with our Lord. I cherish almost 50 years of memories we shared as we started our families and giggled over lots of silly things. Barb's cheerful attitude inspired me to see the good that can be found in any situation. She had an amazing artistic talent she used to help many organizations. It was so much fun performing with her and Ed at the Speak Easy a few years ago. When people fulfill their purpose for being created they are joyful and happiness is contagious. A special light has gone out of this world but every spot she touched still shines brightly. Jerry and I send our condolences to her family, especially to Ed, Andrea, Bruce and grandchildren. May you find comfort from God's Presence in the form of dear friends and in sweet remembrances.
Joyce and Jerry Briner, Fort Wayne,In
February 16, 2016
One of my fondest memories of Bloomville and Barb were the conversations we had on the school bus ride going home. Patty Price Cole
February 16, 2016
Great lady! Barbs mpositive attitude was addicting. Her passing will create a big void to those who knew her, especially her family. God bless you, Dolch family. Mike and Patsy
Patsy Weithman
February 15, 2016
Larry and Jan Howell: God be with you!
February 15, 2016
So surprised to hear of Barb's condition a month or so ago. We really missed her at our painting group at the Area on Aging. She's a very nice lady and strong Christian. I always was pleasantly surprised when she made to our group and shared her ideas and adventures. Barb, we miss you. Ed, take care and are very, very sorry for your (and our) loss.
Dave and Jessie Petska
February 14, 2016
Terry Fawley
February 13, 2016
Jim ans Ann Seyer
February 13, 2016
Showing 1 - 10 of 10 results