To plant trees in memory, please visit our Sympathy Store.
Published by Buffalo News on Sep. 2, 2012.
MEMORIAL EVENTS
No memorial events are currently scheduled.
To offer your sympathy during this difficult time, you can now have memorial trees planted in a National Forest in memory of your loved one.
Funeral services provided by:
Lombardo Funeral Home
GUEST BOOK
15 Entries
Dear Joe and Florence,I am sorry for the loss of your brother Mike.I know you were so proud of him for the way he represented the best in our veterans not only locally but nationally. My deepest condolences to the Grisanti's dear friends.Richard Grisanti Arcade, New York
September 26, 2012 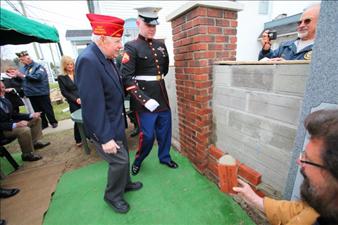 I worked with Mike on the county (Legion) website in the past, and other IT concerns.

I salute the Commander, he will be sadly missed. Mike was always a true patriot.
Frank Frainier
September 17, 2012
May you rest in peace and God bless your family and loved ones. You are a true Hero and thank you
From the Veterans in Nevada
USMC 3rd recon
Kim Young
September 5, 2012
I had the distinct pleasure of interviewing PNC Kogutek on video in the fall of 2010 for The American Legion archives. He dressed up in a suit and shared many memories and insights that day. After we finished, he changed into his comfy clothes and made me a Manhattan. Later, we went over to the dining room for dinner. He made me feel right at home. I will always remember him, and I know he will be missed by many.
Marty Callaghan
September 5, 2012
Celebrating a life well lived. We will cherish the memories forever.
PC JOE WHO & GERI LEPKOWSKI -63
September 5, 2012
All the members of post NY 1041 are saddened with the passing of our friend and fellow veteran. God Bless and take Mike to his home in heaven. Thank you God for sharing him with all of us.
Niagara Frontier AL NY Post 1041
September 4, 2012
Our deepest sympathy to Michael and Sharon on the passing of their father. Mike was a true Legionnaire.
Ron and Carol Puckett
September 4, 2012
My condolences to the Kogutek family. Mike was a great friend and a great American hero.
John Driscoll
September 4, 2012
Dear Sharon and Family - May God's peace and blessings be with you at this most difficult time. My thoughts and prayers are with you.
Sally (Mix) Kolenac
Sally Kolenac
September 2, 2012
In memory of a great legionnaire and a wonderful friend. A great American who served his Country when duty called and continued to serve his fellow veteran, community, state and Nation through his membership in the greatest veteran's service organization, the American Legion. His dedication and compassion led him to become the organization's official spokesman when he was elected National Commander. He was an inspiration all. Our deepest sympathies to the Kogutek family in this time of loss.