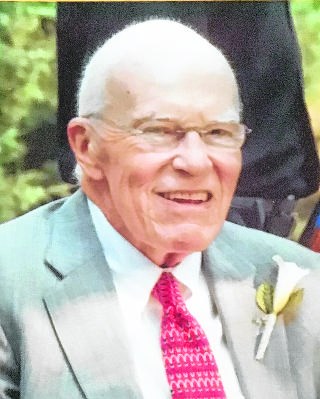 FUNERAL HOME
Marana Mortuary & Cemetery
12146 W Barnett Rd
Marana, AZ
HEALY - Thomas Bernard
February 25, 2021, of Tucson, AZ and formerly of Buffalo, NY. Tom is survived by his beloved wife of 62 years, Joanne Healy; children, Katherine (Robert) Connelly, Thomas (Molly), Timothy (Oxana), Julia, Marni and Michael (Joy) Healy; seven grandchildren; a great-grandson; his sister, Mary Joanne Healy; and nieces and nephews. Tom was predeceased by his parents, Thomas B. Healy, Sr. and Frances D. Healy; and his brother, Richard F. (Renate) Healy. Tom was a 1946 graduate of Nichols School and a member of the Williams College Class of 1950. In 1952, he earned an MBA at Northwestern University. Tom served his country as a Captain and pilot in the Air National Guard in the 1950's. Tom was employed at Bell Aircraft in Buffalo and enjoyed a career in business in Buffalo and Tucson. In Buffalo, Tom served as President of the Nichols School Board of Trustees and on the Board of Directors for Child & Family Services and the Salvation Army. After relocating to Tucson, Tom continued to serve on the Board of Directors for the Salvation Army. Tom was a member of the Rotary Clubs of Buffalo and Tucson. He was a passionate advocate for the developmentally disabled. Tom loved his family above all else. He enjoyed spending summers on the Canadian lake shore and in Colorado. Tom was an avid golfer and fisherman who enjoyed travel and music. A true sportsman, Tom was an original season ticket-holder for the Buffalo Bills and Sabres. Tom placed great value on education. He was a lifelong learner who attended the University of Arizona Humanities Seminars and supported the U of A Wildcats. Tom's family sincerely thanks his caregivers for their steadfast care. A celebration of Tom's life will be held at the Arizona National Veterans' Cemetery at a later date. Donations in Tom's memory may be made to Wright Flight of Tucson (wrightflight.org) or The Healy Fund at Williams College (giving.williams.edu).

Published by Buffalo News on Mar. 7, 2021.
To plant trees in memory, please visit the Sympathy Store.
MEMORIAL EVENTS
To offer your sympathy during this difficult time, you can now have memorial trees planted in a National Forest in memory of your loved one.
Funeral services provided by:
Marana Mortuary & Cemetery
MAKE A DONATION
MEMORIES & CONDOLENCES
4 Entries
Boyd and I extend our heartfelt sympathy to your family. Please tell Marni we still remember her too. May you draw strength from each other as you say goodbye to such a loved part of your family circle.
Jeanette Done
March 9, 2021
Joanne, I remember going to Watkins Glen with you and Tom. My thoughts are with you and your family!
Tom Street
March 8, 2021
Joanne, You and your family have my deep sympathy.
Joan Willard Gruen
March 7, 2021
HAL AND I REMEMBER LOVINGLY THE TIME WITH YOU AND TOM IN ARIZONA AND HE NOW OUR ANGEL WHO TAUGHT MY SON TO EAT MOUNTAIN OYSTERS I LOVE YOU ALL
mary ellen lowe
March 7, 2021
Showing 1 - 4 of 4 results