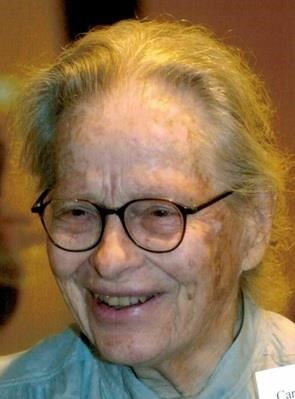 Carolyn Elley Long, age 98, died on Tuesday, November 21, 2017, in Burlington, after a brief illness. Carolyn was born on January 11, 1919, in Philadelphia, the daughter of Harold and Sarah Elley, and grew up in Wilmington, Delaware. She attended Tower Hill School (along with all the other Dupont Company kids) and was into drama, sports (tennis, field hockey, and basketball), and playing the violin. Summers were spent swimming, sailing, and fishing at the Elleys' beloved summer home on Heron Island in Maine. She attended Wellesley College (like all the other women in her family) and continued to be an A student and a jock. The highlight of her college years was a six-week German total immersion program, which she spent in Munich. At Wellesley she played in the school orchestra and graduated Phi Beta Kappa in 1940.

There was no time for the violin during grad school at Yale. A drama teacher introduced her to Littleton ("Tiny") Long, also in the master's program, and they started hiking and playing tennis together. In 1943, she landed a teaching job at Rensselaer Polytechnic Institute in Troy, New York. Tiny was by then in the Army (mostly in Texas) and due to be sent overseas, so they decided to get married, which they did on April 14, 1944, in Wilmington. The following summer they lived in S. Carolina, where Carolyn volunteered for the Red Cross. In 1946, Tiny returned to the states after spending a year teaching in England, and the couple set up house in New Haven. Carolyn worked as a "reader" correcting papers for a faculty member (and doing very odd jobs like working for a mail order pocketbook company) while Tiny finished his doctorate. In 1949, Carolyn's parents gave them a car, and they moved to Vermont, having decided that it afforded the best skiing of all the places Tiny had job offers. (They were both members of the New Haven Ski Club, and were involved in the creation of the Mt. Snow ski resort.) Tiny joined the English Department at UVM, and three years later they bought an old farmhouse on Spear Street (then a dirt road) in South Burlington for $11,000. Their first child, Alan, was born in 1950, and Eleanor, Katharine, and Daniel came along after the move to Spear Street. Carolyn was very involved with the Wellesley Club (in particular the annual sale known as Shoppers' Showcase) and--as soon as she had children in the school system--with local politics (Democratic party) and education. She started a newsletter called Ed News which was published for over ten years.

After Alan joined the Vermont Youth Orchestra in 1964 on flute, Carolyn became very busy with the Burlington Friends of Music. She also started playing her violin again, took lessons, and played in the Vermont Philharmonic and the UVM Orchestra. She officially became the volunteer manager of the VYO in 1967.

There was a period of time when Carolyn was juggling education, politics, music, Wellesley, four kids—and ongoing renovations at "Disaster Manor," the apt nickname for the 150-year-old house at 1720 Spear Street. There was also an orchard to take care of, a tennis court, a grape arbor, a large garden, and trails in the woods to be kept clear for cross country skiing. She somehow found time to write articles for Vermont Life, host Fresh Air kids, do beautiful wood carving, and create custom-made linoleum blocks and crossword puzzles. She loved to hike and was never happier than out in the woods, birdwatching and bushwhacking! She and Alan had a project of climbing all the highest New England peaks.

After Tiny's death in 2003, Carolyn elected to continue living at 1720, where her land protected her (on two sides!) from the encroachments of "progress." She faced head-on the challenges of old age and living alone, not to mention dealing with the aged homestead and the rental property at the other end of the orchard. She was independent to say the least, but social also, and always possessed an energy of mind, spirit, and body that were the envy of people decades her junior. She continued teaching private violin pupils until age 97 when, after breaking a hip, she moved to the wonderful caring Converse Home in Burlington. At Converse, she made friends and devoted much of her time to jigsaw puzzles and listening to music.

A lifelong lover of nature and animals, Carolyn gave generously to many conservation organizations. She abhorred cruelty to animals, and took impeccable care of her succession of adored cats. She loved books, especially mystery novels, and was locally famous for picking up cans and bottles on her daily walks—redeemed to benefit the Youth Orchestra, of course. She was still the manager up until 2007 - an awe-inspiring 40-year volunteer career. Her many private students and the countless young musicians she touched through the VYO were devoted to her.

She won awards from the South Burlington School District (for her after-school string program); the "Layman's Award" from the Vermont Educators' Association; a citation of merit from the Vermont Council on the Arts; an Outstanding Service award from Delta Kappa Gamma Society International in 2002 (for her work with the VYO); and the Hometown Hero Award from the United Way in 2004.

Carolyn is survived by her four children, Alan Long and Daniel Long, of Boston, Eleanor Long, of Burlington, and Katharine Pfeiffer, of Clinton, WA, as well as five grandchildren: Chris, Kim, Alex, Adam, and Jenna.

Her legacy takes a material form in the Elley-Long Music Center at St. Michael's College, the home of the Vermont Youth Orchestra, in Colchester. The building is the most tangible evidence of Carolyn's commitment to the VYO, and was made possible by a lead gift from her which also honors her father, Harold Elley.

A funeral service will be held at a later date.

Donations in Carolyn's memory may be made to the Vermont Youth Orchestra, 223 Ethan Allen Ave, Colchester, VT 05446, or to a charity of your choice.


Published by The Burlington Free Press on Nov. 23, 2017.
To plant trees in memory, please visit the Sympathy Store.
MEMORIAL EVENTS
To offer your sympathy during this difficult time, you can now have memorial trees planted in a National Forest in memory of your loved one.
Funeral services provided by:
Shelburne Funeral Chapel of Corbin and Palmer
MAKE A DONATION
Please consider a donation as requested by the family.
MEMORIES & CONDOLENCES
Sponsored by Shelburne Funeral Chapel of Corbin and Palmer.
10 Entries
The Longs were our neighbors on Spear St. We lived in the old farm at 1840 Spear, where Allen Rd ends. The Longs were always revered as thrifty and genuine Vermonters by my father, a UVM grad too. Sadly missed.
Edward Sterling
December 2, 2018
Bonnie Jo
November 27, 2017
Ah, the memories we have of violin lessons with Mrs Long and her trusty side kick Max! It was a blessing to spend time with Mrs Long and absorb the knowledge that flowed out of her. She shared much more than music, grapes, and walnuts...she kept the past alive and taught us to be content with the simple blessings you have. We will miss her quick wit and independent spirit! May The Lord bless her family during this time of sorrow.
The Anair Family
Jennifer Anair
November 25, 2017
Dear Eleanor and Family, We were sad to hear that our dear friend, Carolyn, has died. What a wonderful full and happy life was hers. Eb and I were married in your livingroom forty-eight years ago this coming December 19th. We were always glad to have a chance

to stop and visit with your Mother on our trips back to Vermont from our home in Williamstown. Fondly, Eb and Peggy Altmann
November 24, 2017
Carolyn always knew that one thing that made the difference to a child playing an instrument and took care of that one thing. So much to thank her for. And so many stories to tell but not enough room here.
Alex and Sandie Blair
MARY Blair
November 24, 2017
Thank you Mrs. Long for your love of music. You will be missed. You and the Vermont Youth Orchestra hold a special place in my heart.
Katherine Poborsky Leahy
November 24, 2017
What an amazing woman and musician! I fondly remember sitting in her kitchen as my older daughter took violin and viola lessons from her.
I served on the BFOM board later to become VYOA with her and witnessed the endless energy she expended on the newsletter. I was fortunate to take a Canadian literature course from her husband while at UVM. As we drove past her home coming into Burlington for Thanksgiving with family still here, she was in my thoughts.
She left an indelible legacy in Burlington.
Priscilla Short Kerr
November 23, 2017
We will forever be grateful for Mrs. Long. Her devotion, passion, energy, and inspiration which enabled an unequaled musical experience for so many Vermont youth, including our son, will forever be her legacy. She was so gracious and humble, and we always enjoyed her company when setting a stage or breaking it down for VYO performances; these moments are not remembered for the mechanics of those highly organized endeavors but for the interactions with her and her intellect, humor, and warmth.
Gary, Nadia, and Scott Graham
November 23, 2017
I am sad to hear of her passing, especially on Thanksgiving Day. She was instrumental in the the career of my son Mark (oboist) though she did not take credit for it at the memorial for him some years back (which she graciously attended). And yes, I remember the bottles and cans! A great lady whose presence will be missed in the community.
John Weiger
November 23, 2017
My dear old friends and neighbors, Alan, Eleanor,Danny and Kathy. I am deeply saddened to hear of your mom's passing. I will miss seeing her walking along our familiar 'block'. She was an amazing woman and I'll always remember being at your house so much growing up. I can still remember everything about it. She will be fondly remembered by so many.With love, Sibba
Sib
November 23, 2017
Showing 1 - 10 of 10 results