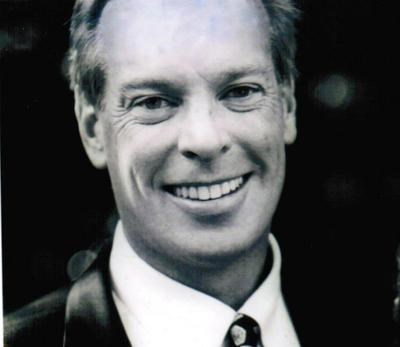 It is with great sadness and heavy hearts that we share the news of David Ralph Thompson, 58, who passed away unexpectedly on November 1st, 2017. He was born on September 14th, 1959 in Boston Massachusetts, the son of Peter Hunter Thompson Jr, and Alice May Kreps. He was a graduate of Dexter School, St. Mark's School, Bates College, and Northwestern's Kellogg Graduate School of Management.

David began his career at Kraft General Foods in Massachusetts, where he met his future wife, Bernadette Margaret O'Brien (Thompson). At the time, he was a lowly Mid-level Marketing Manager, who sat caddy-corner to a sweet red-headed Manager of Customer Service-- who happened to be two years his senior.

After several futile attempts to win her affection, she finally said yes. They were married on March 28th, 1987, and together they had three children, Caroline Sinnott Thompson, Andrew Hunter Thompson, and William Ellsworth Thompson.

David had an entrepreneurial spirit and worked relentlessly to build a company from the ground up, with nothing but a laptop and a dream. He spent his life in the frozen foods business, working for Birds Eye and Entenmann's, developing go-to-market strategy. In 1999, David quit his corporate job and founded his first company, Chestnut Direct, which eventually became Home Bistro, a frozen foods catalog delivering 'chef prepared meals, right to your door'. In the early 00's, he opened a Processing Plant in Plattsburgh, NY, with Scott Stillman, his longtime business partner and friend. In 2003, the family moved from the New York City area up to South Burlington, VT, where the children attended South Burlington High School.

He was passionate about sports, having played hockey, football and lacrosse growing up. David became involved with the South Burlington Youth Lacrosse program and was instrumental in helping grow the program into what it is today. He was a coach for the South Burlington Dolphins Youth Football team, where his son Will also played. Many in the area will remember him simply as "Coach Dave".

It was very important to David that his children were supported in pursuing their passions and follow their dreams. He encouraged his daughter, Caroline, to move to New York City and pursue her career, where she still lives today (though now chasing a somewhat different dream). He admired his son Andrew, the smart one, for his understanding of how things work and ability to think outside the box, joking that they'd be lost without him. And he hoped his son Will would one day play in the NFL, if only so he could spend his life cheering from the sidelines.

In addition to his wife and children, David is survived by his sisters Katherine Otte, of Houston TX, Nancy Jubitz, of Portland, OR, Robert Thompson, of Snohomish, WA, and Peter Hunter Thompson III, of Tampa FL.

Services will be held on Tuesday, November 7th at First United Methodist Church in Burlington. 21 Buell St, Burlington VT, 05401. The family will be receiving at the church from 3:00-4:00pm, service to follow. Expressions of sympathy may be made in David's memory to the Northeast Addiction Treatment Center, 36 Miller Stile Road, Quincy, MA 02169. The Ready Funeral and Cremation Service, 261 Shelburne Road, Burlington is assisting the Thompson Family with arrangements. To share online condolences please visit www.readyfuneral.com


To plant trees in memory, please visit our Sympathy Store.
Published by The Burlington Free Press on Nov. 5, 2017.
MEMORIAL EVENTS
Nov
7
Visitation
3:00p.m. - 4:00p.m.
First United Methodist Church in Burlington
21 Buell St, Burlington, VT
Nov
7
Service
4:00p.m.
First United Methodist Church
, Burlington, VT
Funeral services provided by:
Ready Funeral Service, Inc.
MAKE A DONATION
MEMORIES & CONDOLENCES
Sponsored by Ready Funeral Service, Inc. South Chapel.
17 Entries
David played a formative role molding me as a person. When I was a boy at Robin Hood Camp he was my cabin counselor and friend.He showed me the crucial importance of friendship, loyalty and humor - along with my other cabin mates, we spoke long into the night! What days those were! He was a marvelous friend whom I will never forget.
David Lanchner
Friend
March 5, 2021
Bernadette, Will, and the Thompson Family - Our most sincere sympathies for your heartbreaking loss. Dave's incredible caring, generosity, and coaching had a tremendous impact on our sons and many others in the South Burlington community that will never forget. And we will always remember Dave as a wonderful and true friend. Our thoughts, prayers, and love are with you. The Nolting Family
Tom and Carrie Nolting
Friend
November 13, 2017
My loves goes out to all of you....so sad. Though we have not even met...we are indeed, family , connected in spirit. I am so very sorry for David's passing and the loss of your very dear husband and Dad.
Rosemarie
Rosemarie Shaw
November 7, 2017
With our love and deepest sympathies to the family
Your in our hearts ♥ and prayers
Diana Schwaigert
November 6, 2017
I am so sorry to hear this news. I am a classmate, teammate and friend of Dave's from St. Mark's School. We are all just getting the sad news. While our paths haven't crossed much over the years since high school, I can tell you that there were few others that you could count on as much as Dave when the going got tough. He worked hard, played hard and had a fantastic attitude (and a great laugh and smile)! I am sure I speak for all his classmates from St. Mark's when I say the news of his passing casts a dark shadow on our hearts. Dave, we miss you brother.
Bill Burgess
November 6, 2017
Prayers go out to Bernadette and family during this very sad time. So sorry for your loss.
Melissa Carvey
November 6, 2017
Bernadette & family: Please accept our sincerest condolences at this time of great loss.
Jack & Mary Gersbach
Neighbor
November 6, 2017
I had the honor and privilege to work with David over the last decade and a half. It was so sad to hear that he had passed much too soon. My deepest sympathies to Bernadette and her family.
Michael Strange
November 6, 2017
Very sad to learn of Mr. Thompson's passing.Will and family - our deep sympathy and sorrow.
LIZ BRACCHITTA
November 5, 2017
I was very surprised to read of Dave's passing today. My relationship with Dave was due to lacrosse and his involvement with the South Burlington youth program. Dave knew I lived in SB and was a lacrosse official so he asked if I could officiate some of their games. Over the course of several years I think I did SB youth games just about every weekend in the season! Dave poured everything he had into the program for the kids, even spending his own money to have a portable scoreboard that he would bring to the field. He cared so much for the kids and always treated the officials with respect. Thanks for the memories Dave and for what you did for so many youth lacrosse players in South Burlington. My thoughts and prayers are with his family at this difficult time.
Woody Carrigan
Friend
November 5, 2017
Bernadette, Caroline, Andrew and Will: we are so sorry. May the hole in your hearts be open to the love that is expressed here.
Maggie and Andy Holt
November 5, 2017
Heartfelt condolences to all the Thompsons. May he Rest In Peace.
Lari &David Goldsmith
November 5, 2017
I was very sad when i heard the news that David passed away. I worked closely with David for most of the last ten years. He was a thoughtful, passionate and wonderful man. I shall miss my conversations with him.
Stuart Revo
November 5, 2017
While I never met David I had the great honor of working with Bernadette at Keebler. She shared much about David with us. Karen and I are saddened by this news and will pray for the family and God's peace for David. Rick Lynch
Richard Lynch
November 5, 2017
Thinking of David and family and wishing you all peace and comfort as you remember a great man!
Brendon Driscoll
November 5, 2017
So sorry for your loss. Praying for you all during this difficult time. Ed and Chris Fitzgerald and family
Chris and Ed Fitzgerald
November 5, 2017
So sorry to hear he's gone. He was great family man and a pleasure to know. We'll all miss him.
Wayne Holmes
Family
November 4, 2017
Showing 1 - 17 of 17 results