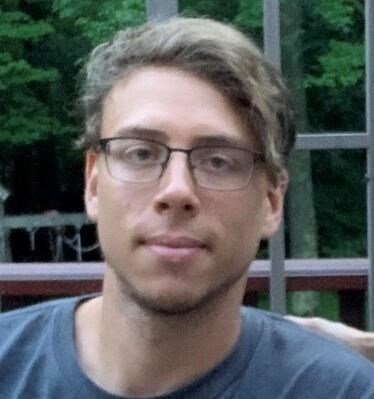 With deepest sorrow, we announce that Davin Richard Garcia, age 27, of Essex Junction, Vermont, joined his father in Heaven October 31, 2020, unexpectedly. He was born April 8, 1993, in Rockville Centre, New York, the beloved son of David and Deborah (nee Rieb) Garcia. He resided in the town of Freeport, New York, where he attended Lawrence-Woodmere Academy through the ninth grade, until his family relocated to the town of Essex Junction Vermont. He graduated from Essex High School in 2011, where he played clarinet in the wind ensemble, piano and alto saxophone in the jazz band, and tennis. He also played clarinet in the Vermont Youth Symphony Orchestra. Davin achieved musical accolades with the New York State School Music Association (NYSSMA) and the Vermont All State Music Festival, achieving first chair in Clarinet his senior year. He attended Babson College to study entrepreneurship from 2012-2014. He was a mentor and board member with the Teen Center of Essex Junction during his high school years.

Davin played baseball from the age of 6 to 16, playing high school baseball for two years before switching to Tennis. He played competitive tennis throughout his youth in the USTA Eastern Section, Long Island Region and New England Region. He was co-captain of the Essex High School tennis team in his senior year when he played an undefeated season as second and first singles, leading the team to state championships. He was a member of the Babson College tennis team during his time there. He also enjoyed skiing, kayaking, boating, fishing, and rebuilding his car and boat.

Davin studied piano for over 25 years, clarinet for ten years, and saxophone. He was an accomplished artist who enjoyed composing works blending classical, jazz, Afro-Latin jazz, new age, rock, rap, and other genres.

Davin was an old soul with a gentle manner, who approached life with a playful humor that drew people to him through laughter, with love. Family, friends, and acquaintances will forever feel his loss, our loss.

Davin has joined his father, David Garcia, whose life was taken in the September 11th attacks of the World Trade Center. He is survived by his mother, Deborah Garcia of Essex Junction, VT, his brother Dylan of Brooklyn, NY, his paternal grandmother, Hiro Garcia of Wappinger's Falls, NY, his maternal grandparents, Richard and Dorene Rieb of Moriches, NY, his Uncle Richard Garcia of Essex Junction, VT, his cousin Shina Ellis-Garcia of Queechee, VT, his Aunt Wendy and Uncle John and cousins of Dunkirk, MD, and a large circle of extended aunts, uncles and cousins. He is also pre-deceased by his paternal grandfather Stanley Garcia, and his maternal grandmother, Elizabeth Rieb.

Davin was laid to rest in a family plot beside his father at the Poughkeepsie Rural Cemetery, Poughkeepsie, NY on November 13, 2020. A charitable fund TBA will be planned in his memory in the near future. Arrangements have been entrusted to the care of the Ready Funeral Home Mountain View Chapel 68 Pinecrest Drive in Essex Jct. Please visit www.readyfuneral.com

Davin, I pray that you find the peace you long for in the arms of your daddy. I love you forever, my beautiful boy.


Published by The Burlington Free Press from Nov. 16 to Nov. 17, 2020.
To plant trees in memory, please visit the Sympathy Store.
MEMORIAL EVENTS
To offer your sympathy during this difficult time, you can now have memorial trees planted in a National Forest in memory of your loved one.
Funeral services provided by:
Ready Funeral Service, Inc.
MAKE A DONATION
MEMORIES & CONDOLENCES
Sponsored by Ready Funeral Service, Inc. Mountain View Chapel.
8 Entries
I only knew Davin through your videos, photos, and words, but I feel the essence of him. The moments of accomplishment, celebration, tradition. The place he had in your life and in your heart. My deepest sympathy to you and Dylan.
Linda Cammerer
Friend
November 13, 2021
My beautiful boy, my mother's heart is heavy, missing you terribly. I cannot believe a year has passed since I last felt your breath in my arms, the timbre of your voice on the phone, your melodies in the air. I pray you know my Illimitable love and that reunion will come. All the love in Mommy's heart.
Deborah A. Garcia
November 11, 2021
My deepest condolences to all of Davin’s family and friends, I was so saddened to hear the news. We knew each other for a short time in high school and he was always kind and fun to be around. My prayers go out to you all.
January 8, 2021
I’ll miss you my friend. I’ll always remember when I first heard you play the piano. I’d known you for over a year at that point and you’d never mentioned it- but that day we all heard you play. I remember everyone’s eyes in the room perking up and looking at you in complete awe. That memory always stuck with me as it really encompassed Davin. You were so humble which is why no one realized you had that talent until that day. The music you played that night left everyone in such a happy place which was similar to how we’d always feel when around your lighthearted personality. I’ll miss the jokes, the days at practice and just generally hanging around chopping it up with you.
Thanks for teaching me to string a racquet (thanks for messing Roberto’s racquet up that one spring break- jokes for days) and I know you’re in a better place and I hope you have your peace.
Ramone Doyley
Friend
November 30, 2020
Sending deepest condolences... the news is so very sad. I remember him fondly from our days at LWA. Davin and all who loved him will be in my prayers.
Peter Meehan
Teacher
November 26, 2020
Davin, when I think of the phrase "fun loving" I think of you. You brought joy and laughter everywhere you went into every room you entered. From the day you were brought home as a baby you made our hearts smile. So smart, curious, helpful and hilarious you had such a gift of making us laugh. The talent and love you left behind is so enormous. You aksed for so liyyle but gave us all so much. I wish you could have felt it while you were here and I pray you feel it now and are at peace in the arms of your father. I can't put into words the emptiness that is felt, you will always have a big piece of my heart and will never be forgotten and will always be with me I Love You my beautiful nephew... Aunt Wendy
Wendy Farrar
Family
November 22, 2020
Davin, my sweet, beautiful son, I have loved you for twenty-eight years. From the moment I heard the eager beat of your heart and saw the shadow of the shape of you in my womb, I’ve been changed. You gave me a name, “Mommy,” held my hand, taking the bewildering journey beside me, through this vague paradox. What can a mother say about her beloved son so injured by the world, that his spirit could no longer endure the gravity. I pray that your soul finds the answers it seeks, that you curl in the loving arms of your father, that you feel comfort in the warmth of the glow in the hearts of all those who’ve been touched by your brilliant light. I want you to know that your life matters. Your cast is wide, reaching deep into the mortal expanse. I wait for your arrival in my dreams, to hear your beautiful music as I bring you into the fold of my loving bosom and cradle your tender soul. I Love you forever, Mommy,
Deborah Garcia
Mother
November 20, 2020
I am sending my deepest sympathies to all who loved this young man. He was obviously talented and much beloved, I pray that you are all able to find your peace.
Fellow Parent of a Young Adult
Acquaintance
November 19, 2020
Showing 1 - 8 of 8 results