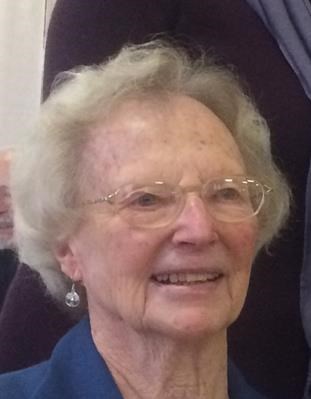 Burlington - Elsa Carpenter died unexpectedly at her home in Charlotte, VT on December 17, 2018 at the age of 88. She was born on November 13, 1930 to Fred and Minna Buschner of Teaneck NJ. After graduating from high school in Teaneck, she attended Bates College in Lewiston ME, earning her BA in sociology. It was at Bates that she met Robert Carpenter, who was to be her husband for 65 years. Their early years of marriage featured frequent moves, as Bob's military service and early career with IBM took them to Sacramento CA, Waco TX, Oakland NJ, Vestal NY, Burlington VT, and Suffern NY. In 1966 they were able to return to Vermont for good, settling first in Burlington while the children were in school, then moving to Charlotte in 1985, where she found peace and joy in the birds at the feeders, the wildlife in the fields, and the sunset views over Lake Champlain.

From her work in the benefits office at the University of Vermont to her countless hours of volunteer efforts, Elsa lived her life in service to others. She was an active and devoted member of the First United Methodist Church of Burlington, serving on many different boards and committees. She gave freely of her time and energy as a troop leader and state officer with the Girl Scouts of America. Foremost, however, was her fierce devotion to her husband and family. In her constant, unwavering love, care, and strength she was the rock and anchor of the family, throughout the years and across the generations, in ways both large and small.

Elsa was predeceased by her three brothers, Paul, Frederick, and Carl Buschner. She is survived by her husband, Robert J. Carpenter of Charlotte VT; her three children: Kathy Carpenter of Middlebury VT, James Carpenter (and spouse Lucinda Thayer) of Plover WI, and Susan Vigne (and spouse Greg Vigne) of Whitefield NH; five grandchildren: Elizabeth Cook (and spouse Philip Cook) of Beverly MA, Hannah Rommer of Hanover NH, Catherine Vigne of Whiting VT, Emily Qian Vigne (and spouse Kenneth Qian Vigne) of Minneapolis MN, and Sarah Covie (and spouse Ali Covie) of Portland ME; along with four great-grandchildren and many nephews and nieces.

A funeral service will be held at the First United Methodist Church of Burlington on Friday, December 28 at 11:00 AM. There will be a reception at the church following the service.

In lieu of flowers, memorial contributions may be made to the Paul N.


To plant trees in memory, please visit our Sympathy Store.
Published by The Burlington Free Press on Dec. 23, 2018.
MEMORIAL EVENTS
Dec
28
Funeral service
11:00a.m.
First United Methodist Church
, Burlington, VT
MAKE A DONATION
MEMORIES & CONDOLENCES
7 Entries
Dear Bob & family
I was so saddened to hear of Elsa's passing!
We have so many special memories of both of you as our lovely neighbors on Hills Point!!
Countless times we would chat on the street - enjoy the sunset & watch as my girls got bigger & bigger!
Your beautiful gingerbread house every thanksgiving was very inspiring!!
You will be missed & always remembered as A friend to all of us!
Hugs to you Bob!!
Dominique Trey Lily & Sage Pecor xoxoxo
Dominique Pecor
January 10, 2019
To the family of Ms. Elsa Carpenter,

I would like to express my sincere condolences for the loss of Ms. Carpenter.

May the Most High God strengthen your family during this difficult time of sorrow. Please find comfort in Psalms 145:18, 19 promise that "he is near to all those calling on him."

Sincerely,
December 24, 2018
Our deepest condolences to The Carpenter Family.
The West family holds such dear memories in our hearts from attending Taft together, participating in those 'famous' Christmas church programs, to skating on their ice rink and wonderful playdates at their beautiful, classic VT home with those delicious homemade cookies!

The West family holds many dear memories in their heart from att
December 23, 2018
So sorry to read of this loss to the family. The strength from God can sustain you through this difficult time. May sharing memories bring you a measure of comfort now and in the days ahead.
The Lewis Family
December 23, 2018
I was fortunate to have a nice conversation with Elsa just a few weeks ago. Oddly enough I commented on how young she was in mind and spirit, for someone of Her age. Every interaction I've had over the years was always wonderful. She always had a smile and a kind word, I'm going to miss Her.

Deepest condolences to the family.
Aaron Gibson
December 20, 2018
My thoughts are with the family during this difficult time. I hope that the promise in 1 Thessalonians 4:14 can bring you comfort. Knowing that there is hope for our loved ones lost in death can be reassuring.
N
December 20, 2018
Showing 1 - 7 of 7 results