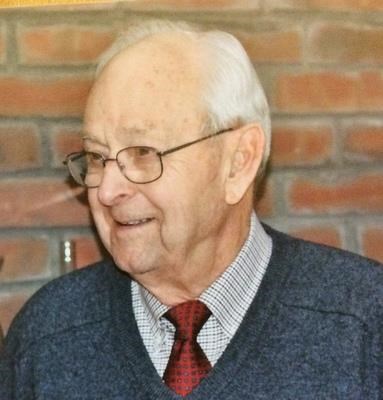 Middlebury - Robert J. Carpenter died in Middlebury, VT on January 6, 2019 at the age of 88. He was born on March 22, 1930 to Roland and Izetta Carpenter in Blaine ME. After graduating from high school in Bangor ME he attended Bates College in Lewiston ME, earning his BA in economics. It was at Bates that he met Elsa Buschner, who was to be his wife for 65 years. After graduation Bob entered the US Air Force, training as a navigator/bombardier in Sacramento CA and serving as a navigator/bombardier instructor in Waco TX. After finishing his military service, he joined the IBM Corporation as a sales trainee. His early career with IBM featured frequent moves, from Oakland NJ to Vestal NY to Burlington VT to Suffern NY. In 1966 he was able to return the family to Vermont for good, settling first in Burlington while the children were in school, then moving to Charlotte in 1985, where he and Elsa enjoyed gardening, sailing on Lake Champlain, and reveling in the varied seasons and scenery of Vermont.

Bob was a proud New Englander, dry, witty, reserved, and smart. He enjoyed competition, whether on the court as captain of the Bangor High School and Bates College basketball teams or on the golf course, playing with friends in member-guest tournaments at Burlington Country Club. He was particular about doing things the right way. He was devoted to his family, supporting his wife and children in all of their interests and endeavors and introducing them to the activities he loved, from games of Cribbage and Hearts at the card table to hiking, camping, and skiing in the woods and mountains of Vermont and Maine. An Eagle Scout himself, he was an active troop committee member for Boy Scout Troop 1 in Burlington, as well as serving as Treasurer for the Vermont Council of the Girl Scouts of America. He continued to expand his interests after retirement, spending many hours volunteering at the Lake Champlain Maritime Museum.

He was predeceased by his wife, Elsa B. Carpenter, who died on December 17, 2018; his sister Jean Carpenter Keller; and his brother Charles Carpenter. He is survived by his three children: Kathy Carpenter of Middlebury VT, James Carpenter (and spouse Lucinda Thayer) of Plover WI, and Susan Vigne (and spouse Greg Vigne) of Whitefield NH; five grandchildren: Elizabeth Cook (and spouse Philip Cook) of Beverly MA, Hannah Rommer of Hanover NH, Catherine Vigne of Whiting VT, Emily Qian Vigne (and spouse Kenneth Qian Vigne) of Minneapolis MN, and Sarah Covie (and spouse Ali Covie) of Portland ME; along with four great-grandchildren and many nephews and nieces.

A funeral service will be held at the First United Methodist Church, 21 Buell Street, Burlington VT on Saturday, January 12 at 1:00 PM. There will be a reception at the church following the service.

In lieu of flowers, memorial contributions may be made to the Paul N. Carpenter '33 Scholarship Fund at Bates College (ATTN: Gift Processing, 2 Andrews Road, Lewiston ME 04240) or to the Lake Champlain Maritime Museum (4472 Basin Harbor Road, Vergennes, Vermont 05491).


To plant trees in memory, please visit our Sympathy Store.
Published by The Burlington Free Press on Jan. 9, 2019.
MEMORIAL EVENTS
Jan
12
Funeral service
1:00p.m.
First United Methodist Church
21 Buell Street, Burlington, VT
Funeral services provided by:
Sanderson Funeral Service - Middlebury
MAKE A DONATION
MEMORIES & CONDOLENCES
Sponsored by Sanderson Funeral Service - Middlebury.
1 Entry
I will be away in Washington DC on Saturday and will say a prayer for your father and for you and your grieving family.
Ann H
January 9, 2019
Showing 1 - 1 of 1 results