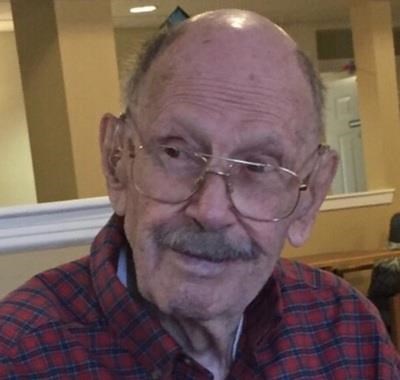 Steele joined the US Army Air Corps in 1943. After leaving the war in 1945, he married the love of his life, Teresa Helen Scarborough. Terry predeceased Steele on May 18, 2015. Steele and Terry settled in Highgate, VT, in the house Steele's mother was born in. Steele painted and wallpapered houses during summers, while teaching at Bellows Falls Academy.

Steele formed S.T. Griswold & Company in 1957, starting with highway guardrail jobs. In 1958, Steele added Ready Mix Concrete to his accomplishments, where he stayed until his retirement in 1988. In 1971, Steele and Terry bought the Shelburne Shipyard, and Terry ran it until 1997.

Steele was pre deceased by his brother Douglas, his parents and his wife Teresa. He is survived by his children; Jill and her wife Karha, Doug and his wife Lori, and Mary and her wife Katherine. His grandchildren Jeremy (Kristy), Lisa and her husband Brian, Jessica (Scott) and Emily (Dean). His great granddaughters Mary and Grace.

There will be a celebration of Steele and Terry's lives on October 21st at 4:00pm and the All Souls Interfaith in Shelburne. 291 Bostwick Farm Road.

Arrangements are in the care of the Ready Funeral & Cremation Service. To send online condolences please visit www.readyfuneral.com.


To plant trees in memory, please visit our Sympathy Store.
Published by The Burlington Free Press on Sep. 28, 2016.
MEMORIAL EVENTS
Oct
21
Celebration of Life
4:00p.m.
All Souls Interfaith
291 Bostwick Farm Road, Shelburne, Vermont
MAKE A DONATION
MEMORIES & CONDOLENCES
10 Entries
Thanks to Steele for his support of the Green Mountain Soccer Team back in the 70s. This support allowed a group of die hard soccer Men to continue playing soccer in the Canadian Soccer League in Montreal. The love of the game continues, to this very day , these soccer stories were made possible by Steele. May you rest in peace as your involvement made a difference in others. LES & Nancy
Nancy Johnson
October 2, 2016
Jill, Doug and Mary,

Sorry to hear of your Dad's passing, I continue to remember those weekends at the Ski Bowl, getting ready for the ski season, your Dad filming all the events with his 8 mm camera. After reading your Dad's book I am still amazed of all the things he did throughout his life and the impact he had on us and the community.

Sending condolences over the loss of your wonderful incredible father.

I got to meet him when your co-lab worker, Jill, and then to know him and Terry more when we were members of the Shelburne Yacht Club. Successful plus modest and kind. I always felt at ease with and in some awe of your parents.

Ruth Kennedy Grant
Ruth Kennedy Grant
October 2, 2016
Doug and family. I am very sorry for your loss. I never had the opportunity to meet Steele, but I always had the greatest respect and admiration for all his accomplishments and how he operated his business. He was a Legend with in our industry and I am very thank full for all he has done. May the Concrete Gods watch over him!
Scott Ireland
October 1, 2016
God Bless the Griswold family, extended family. Growing up in Essex jct. in the 50's, 60"s it was the Griswold, Durbrow, Flander, Hagadorn, Smith, Petre, McClure, Robinson, Lavoie, Drury and many others, that were the foundation of the village and a great time to remember. My family were the owners of Allen's Sugar House, which was a landmark of the 1960-1991, but as flatlander's come in, so do the disappearance of the foundations of a great town growing up. I cherish my memories of growing up in that time..God Bless the ICON's of our childhood as they will live on in our memories. Judymae Allen Cognetta
Judymae Allen Cognetta
September 30, 2016
Please accept my sincere sympathy. I had the privilege of caring for him after his wife passed away. I am glad he is now at peace.
Annette Grissom
September 30, 2016
Doug and Mary,

Our thoughts and prayers are with you.