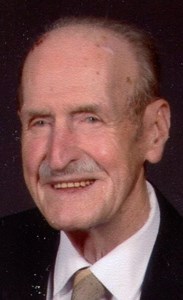 Born on July 18, 1923, he was the son to his late parents, Halbert Lamberton Grimm and Carrie Lillian Frazier Grimm in Emlenton, PA. He graduated from Emlenton High School in 1943.

Harry was a United States Army Veteran and when active had successfully completed 35 missions as a tail gunner in a B-17 during World War II. He was interviewed by representatives of the Pentagon and the article was recorded at the Smithsonian Institution in Washington, D.C. A copy of that article may be viewed at https://www.veterans-in-Blue.af.mil/Veterans/Vetlib/Article/745318/harry-grimm/ Harry was the recipient of the Good Conduct Medal, Air Medal with 5 oak leaf clusters, European African Medal, Middle Eastern Theatre Campaign Medal and three Bronze Battle Stars.

He was employed by Quaker State Corp. in Emlenton and Newell, W.Va., retiring after 42 years. He was a current member of Center Presbyterian Church in Slippery Rock and a former member of the Emlenton United Methodist Church. He was a lifetime member of the VFW Post No. 6450 located in Chester, W. Va.

Published by Butler Eagle on Jan. 18, 2021.
To plant trees in memory, please visit the Sympathy Store.
MEMORIAL EVENTS
Jan
30
Memorial service
11:00a.m.
Center Presbyterian Church
211 Center St., Slippery Rock, PA
Funeral services provided by:
Smith Funeral Home
MAKE A DONATION
MEMORIES & CONDOLENCES
3 Entries
Harry was a good friend and neighbor, true gentleman and National HERO. Very sorry he is no longer with us. Condolences to Margaret and his children. The greatest of the greatest generation! Rest In Peace in hero heaven. It was the honor of a lifetime knowing you. A giant among men.
Daniel G. Sloan Jr
Friend
January 28, 2021
Thank you for your service to our Country in World War II! 35 Missions is remarkable! You were a good neighbor to my parents, Rosemary and Dan Sloan for many years. I’ll miss seeing you moving your lawn; you took such good care of your home. Rest In Peace “Harry the Hat”!
Barbara McCormick
Acquaintance
January 23, 2021
Harry will be missed dearly by the staff at Emlenton Truck Plaza.We will miss his smiling face .
Vicki
Friend
January 19, 2021
Showing 1 - 3 of 3 results