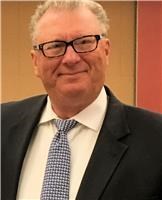 FUNERAL HOME
Thompson-Miller Funeral Home
124 E North St
Butler, PA
Joel Phillips, 73, died Sept. 12, 2021. He was the son of Victor K. Phillips Sr. and Janice Campbell Phillips, who later married Harold Larrick after Victor's death.
Joel graduated from Shadyside Academy. He went on to Allegheny College before enlisting in the U.S. Navy. While in the Navy, he rose to the rank of quartermaster aboard the USS Corry. He was stationed off the coast of Vietnam, and saw action. While serving in the Navy for four years, his tour of duty included many fascinating ports-of-call, to which he referred as his "grand world voyage!"
After his honorable discharge, he attended and graduated from the University of Boston, with an accounting degree. He later received a master's degree in business administration from the University of Pittsburgh.
He started his career at Allegheny Ludlum, where he was an accountant. He always had an interest in real estate, so he pursued this avenue in property management. He also served as president of the Campbell Oil and Gas Co.
Joel had many hobbies, and pursued them avidly. He belonged to several organizations connected to his interests.
Joel is survived by his wife, Kimberly; his son, Steele; his beloved nephews, Brock and Brett; and his mother, Janice Phillips Larrick.
He was preceded in death by his father, Victor K. Phillips Sr.; and his beloved brother, David Phillips.
He is also survived by Elizabeth Phillips of Pittsburgh, Clarinda J. Roe (Philip) of Johnson City, Tenn., Victoria Kelly (George) of Butler, Undine Fader (Philip) of Montgomery, Texas, Victor K. Phillips (Karen) of Lenoir City, Tenn., Mrs. David Phillips (Michelle) of Fayetteville, Ga., Eleanore Anne Dickey (Joseph) of Butler, and Gordon C. Phillips (Janine) of Mechanicsburg, Pa.
The family also includes 23 nieces and nephews, and 42 great-nieces and great-nephews, who all loved "Uncle Joel" dearly. He was always interested in their achievements and well-being. With the marriage of Janice and Harold, he gained five stepsisters and their families.
Joel will be remembered always, as one of the great guys who loved his country, his compatriots, and his fellow men and women. He loved his family deeply from his pure heart and good soul. He was always and foremost a devoted family member, and especially to his cherished mother, Janice Phillips Larrick.
In place of flowers, please pass on the respect he always deferred to others, the kindness he so eagerly bestowed upon us all, and the generosity of his spirit and his brilliance and his time, he so graciously shared each day, as he imbued all who knew him.
PHILLIPS - Friends and family of Joel Phillips, who died Sunday, Sept. 12, 2021, will be received from 4 to 6 p.m. Friday at Thompson-Miller Funeral Home, 124 E. North St., Butler.
Masks are requested to be worn.
Funeral services will be private.
Online condolences may be given at www.thompson-miller.com.
Published by Butler Eagle on Sep. 15, 2021.
To plant trees in memory, please visit the Sympathy Store.
MEMORIAL EVENTS
To offer your sympathy during this difficult time, you can now have memorial trees planted in a National Forest in memory of your loved one.
Funeral services provided by:
Thompson-Miller Funeral Home
MAKE A DONATION
MEMORIES & CONDOLENCES
5 Entries
Dear Kimberly and Janice, I was shocked to hear of Joel´s passing. I enjoyed my interactions with him through the years. He was always well humored, kind and attentive to his duties and responsibilities. Joel´s focus was on his extensive family and the legacy they were making. He is remembered kindly. Please accept my condolences. Jeff
Jeffrey Lehman
Work
September 22, 2021
Dear Janice: My deepest sympathy to you and your family. And I hope you are doing well. God Bless and many healing prayers
Kay Stephenson Davis
September 18, 2021
One of my best memories of Joel was when most of the brothers and sisters gathered downstairs around the black-and-white TV to watch chiller theater. Before it began Joel Would get an order from us to go over to the new McDonald´s behind the Trimburs` House. The best thing was the hamburgers were only a quarter so most of us would get one. Thank you Joel. Rest with God. Maybe there will be a McDonald´s!
Undine Fader
September 17, 2021
I was very sorry to learn of Joel's passing. My deepest sympathy to Joel's family. May God grant you peace and strength. May you be blessed and comforted with your memories and time with Joel. Thomas Iarrapino
Thomas Iarrapino
September 15, 2021
I remember some meaningful conversations with Joel in the past. So sorry to hear of his passing. May the Lord comfort his family.
Phillips Wiegand
Family
September 15, 2021
Showing 1 - 5 of 5 results