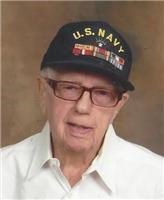 BORN
1926
DIED
2021
FUNERAL HOME
McDonald-Aeberli Funeral Home, Inc.
238 Crowe Avenue
Mars, PA
P.R. "Dick" Steinke, 95, of Orlando, Fla., formerly of Mars, passed away on Thursday, Aug. 26, 2021.
Born Feb. 18, 1926, in Gibsonia, he was the son of the late John and Fannie Shearer Steinke.
Percy had worked at Playtime Equipment in Mars, and later did construction work in Florida.
He had served in the U.S. Navy on the USS Langley CVL-27 during World War II. He had received nine metals for the battles he participated in during his four years of service.
Surviving are two daughters, Sharen Fischer and Kathy Borland (Scott); his grandchildren, Nikole Bovee (Randy) and James Borland (Karen); his great- grandsons, J.T. Borland, Nicholas Bovee and Colin and Caleb Borland; and his great-granddaughters, Rebekka Bovee and Alyssa Lorah.
He is also survived by his sisters-in-law, Helen Jean Dunbar and Shirley Abt (John) and many nieces and nephews
Percy was preceded in death by his wife, Irene May Steinke, whom he married on Feb. 21, 1947, and who died on Jan. 28, 2013.
Percy achieved his goal of being the longest living member of his family, having been preceded in death by his 13 brothers and sisters.
STEINKE - Arrangements for P.R. "Dick" Steinke, who died Thursday, Aug. 26, 2021, were handled by MCDONALD-AEBERLI FUNERAL HOME, 238 Crowe Ave., Mars.
He was buried with military honors at the Florida National Cemetery in Bushnell, Fla.
In lieu of flowers, the family requests that you donate to the Western Pennsylvania Wounded Warrior Project at www.woundedwarrior.org, or to the Mars VFW Post 7505, 331 Mars Valencia Road, Mars, PA 16046.
Condolences are available at www.mcdonald-aeberli.com.
Published by Butler Eagle on Sep. 9, 2021.
To plant trees in memory, please visit the Sympathy Store.
MEMORIAL EVENTS
To offer your sympathy during this difficult time, you can now have memorial trees planted in a National Forest in memory of your loved one.
Funeral services provided by:
McDonald-Aeberli Funeral Home, Inc.
MAKE A DONATION
Please consider a donation as requested by the family.
MEMORIES & CONDOLENCES
0 Entries
Be the first to post a memory or condolences.