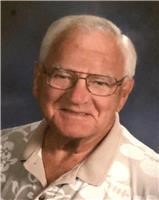 BORN
1931
DIED
2021
FUNERAL HOME
McDonald-Aeberli Funeral Home, Inc.
238 Crowe Avenue
Mars, PA
Raymond E. Johnson, 89, of Zelienople, passed away Sunday, Sept. 12, 2021, leaving his earthly home surrounded by his children and granddaughter.
He was born Oct. 21, 1931 in Chicago, Ill., the son of the late Dorothy Shorek Johnson.
He graduated from Chicago Vocational High School in 1949, and worked three years while attending night school before volunteering for the draft into the Army during the Korean War. One important event he experienced while in the Army was as a volunteer to observe a nuclear explosion in Nevada from a canon fired artillery shell. After Ray's discharge from the Army in 1954, he attended the University of Illinois at its Chicago Navy Pier branch where he met an apartment friend (also a student), who introduced him to a nurse friend, Elizabeth (Betty) Scott. After many declines from the mutual friend for a double date, Ray and Betty agreed to the double date and got on with their lives. However, it worked out very well and they were married in Sept. 4, 1955, in Sterling, Ill.
Ray and Betty's life shared and engaged in many social and community activities, including bowling, bridge, golf and Broadway shows. Their major involvement was volunteering for and later being employed by CONTACT Pittsburgh, a telephone crisis intervention hotline service, a commitment they shared for 30 years. No question that they had a full and happy life together until she passed away on Aug. 10, 2010.
Ray attained a BS in metallurgical engineering in 1958. He was employed as a metallurgist for Diamond Chain Co. in Indianapolis, Ind., and moved to Pittsburgh in 1966 to work for Anvil Products as a cold extrusion engineer and Quality Assurance Manager. He later moved on to Flowline Corp. in New Castle as a Quality Assurance Manager. Through the years, he taught metallurgy to night school machine shop apprentices, joined several technical societies and was actively involved for 30 years with APMI (American Powder Metallurgy Institute), MSS (Manufacturer's Standardization Society), ASTM (American Society Testing Materials and ASME (American Society Mechanical Engineers). He involved himself in community affairs as a school board member (Babcock School District, later Pine-Richland), member of Rotary International (Rich-Mar Club), hosted three Rotary exchange students, hosted three Rotary Exchange Business Team members, joined his wife to go to Scotland on a Rotary Golf Exchange Program, and taught computer classes (including MS Excel!!) at the Lighthouse Foundation for nine years.
After Betty died, Ray moved into the Passavant Retirement Community in Zelienople. There he met and married Ann Keul and started a new phase of his life. Together they enjoyed traveling with family, being involved with PRC activities and spending time with his children and granddaughter, and Ann's three children, Elaine (Ken) Geisel, Kurt (Tina) Keul, and Steve (Adele) Keul and their families, celebrating graduations, weddings and new births.
He was preceded in death by a brother Donald Roy Johnson.
He is survived by his son, David Scott (Barbara) Johnson of Burnsville, Minn.; a daughter, Kathryn Lynn (John) Johnston of Beaver; a beloved granddaughter, Sydney Rae Johnston of Beaver; and three cousins, Carole Klepich (Larry - deceased) Brooker, Janice Klepich (Jean-Pierre - deceased) Golay and Jane (Donald - deceased) Dusek.
Dave, Barb, John, Kathy and Sydney want to especially thank Passavant Retirement Community staff and its Tionesta, Trillium and Blue Ridge nurses and staff for their kind and compassionate care of Ray. Being a blessing to him, we wish them and their families many blessings.
Johnson - Friends of Raymond E. Johnson, who died Sunday, Sept. 12, 2021, are invited to a memorial service at 10:30 a.m. Saturday at Mars United Presbyterian Church, 232 Crowe Ave. Mars. The family will greet friends following the service.
The family suggests memorial donations to Rich-Mar Rotary (for clean water fund), P.O. Box 392, Mars, PA 16046 or to the American Association of Kidney Patients, 14440 Bruce R. Downs Blvd., Tampa, FL 33613.
Arrangements are under the direction of the McDonald-Aeberli Funeral Home, 238 Crowe Ave. Mars.
Condolences are available at www.mcdonald-aeberli.com
Published by Butler Eagle on Sep. 16, 2021.
To plant trees in memory, please visit the Sympathy Store.
MEMORIAL EVENTS
Sep
18
Memorial service
10:30a.m.
Mars United Presbyterian Church
232 Crowe Ave., Mars, PA
Funeral services provided by:
McDonald-Aeberli Funeral Home, Inc.
MAKE A DONATION
MEMORIES & CONDOLENCES
1 Entry
I loved spending time with Ray at prc , he was such a special person. His bright eyes and smile will be missed.
Sara griest
September 15, 2021
Showing 1 - 1 of 1 results