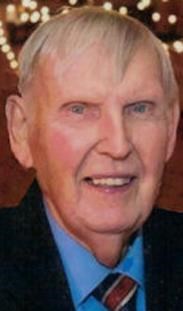 FUNERAL HOME
Thompson-Miller Funeral Home
124 E North St
Butler, PA
Dr. Walter V. Powell, 90, professor emeritus of political science at Slippery Rock University, died at the VNA Inpatient Hospice Unit in Butler on Feb. 27, 2019, after a short illness.
Born on Jan. 6, 1929, in New York City, he was the son of Walter and Estelle Powell.
He attended Manhattan Aviation High School and enlisted in the U.S. Air Force at the end of World War II.
After his military service he enrolled on the G.I. Bill at the University of Connecticut, completing both a B.A. and M.A. in history, and later in his career, a J.D. from Western New England College Law School and a Ph.D. from the University of Sarasota.
Dr. Powell taught for 44 years in the political science department at Slippery Rock University, serving for a time as department chair, and for many years as the prelaw adviser for students considering a legal career.
He also maintained a small private law practice in Slippery Rock and was an active member of the Butler County Bar Association and the Slippery Rock Rotary Club.
Outside of his academic and legal career, he was well known for his passion for military aviation. He loved airplanes - being very proud of the fact that on a modest budget he put together a fine collection that formed the nucleus of a museum he called "The Western PA Aviation Museum" near Mercer.
He was an active member of the Civil Air Patrol, the Experimental Aircraft Association, the Valiant Air Command in Titusville, Fla., the 8th Air Force Historical Society, and was a feature writer for Warbirds magazine.
Above all, he loved his family, and he will be sorely missed by his loving wife of 49 years, the former Nancy Reynolds; his four children, Dr. Walter Powell and his wife, Susan, of Plymouth, Mass., Cassandra Fell and her husband, Gordon, of Pollington, East Yorkshire, England, Grace Hajave and her husband, Ramin, of Grove City and Alexander Powell of Atlanta, Ga.; nine grandchildren; and three great-grandchildren.
He was preceded in death by his sister, Barbara St. John; brothers, Richard and Donald Powell; and a stepson, Donald N. Skelton.
POWELL - Memorial services for Dr. Walter V. Powell, who died Wednesday, Feb. 27, 2019, will be held at the United Methodist Church in Slippery Rock at 11 a.m. Saturday with interment at the convenience of the family.
In lieu of flowers, memorial contributions may be made to the Slippery Rock University Foundation Inc., earmarked for the Pre-Law Student Scholarship Fund.
Arrangements were handled by the Thompson-Miller Funeral Home, 124 E. North St., Butler.
Online condolences can be given at www.thompson-miller.com.

Published by Butler Eagle on Mar. 4, 2019.
To plant trees in memory, please visit the Sympathy Store.
MEMORIAL EVENTS
To offer your sympathy during this difficult time, you can now have memorial trees planted in a National Forest in memory of your loved one.
Funeral services provided by:
Thompson-Miller Funeral Home
MAKE A DONATION
MEMORIES & CONDOLENCES
5 Entries
Dear Nancy and family, Sorry to hear this news. Remember you and Walt from 1970 when we attended SRSR. How the years have passed but have left fond memories of college and married life with our Professors, mine was James Mast, History prof. We have both lost our better halves and must now wait for our reunions in Heaven. God bless Walt who made SRSC a wonderful place to live and learn. Take care and be sure to smile as you and the family remember Walt as the best husband and father. Walt, fly high on your well deserved Golden Wings.
Ruth Durschinger -Mast
March 13, 2019
Robert "Pete" Watson
March 6, 2019
Our deepest and most heartfelt sympathies to the Powell family. Walter was such a kind, sweet man. Rest easy now Walter, we'll miss you.
SRPC
March 5, 2019
My sympathy to the family of Walter Powell. He was such a nice man and I enjoyed working with him over the years. May you find peace in your memories.
Randa Clark DiMaria
March 4, 2019
Walter always had a warm smile for everyone. I have fond memories of Walter and Nancy. May God be with you in your sorrow Nancy.
Ron Breth
March 4, 2019
Showing 1 - 5 of 5 results