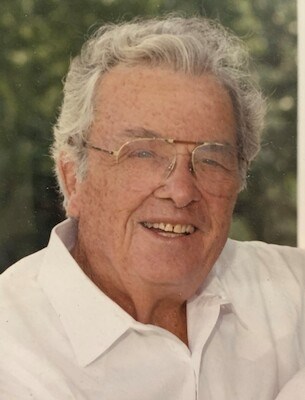 Corpus Christi - Billy (Bill) H. Lincecum, 94, died April 19, 2021, in Sugar Land, Texas. He was born on September 3, 1926, in Monroe, Arkansas to Merle Moody Lincecum and Clifton Lincecum. The family moved to Texas in 1930. Bill spent most of his childhood in Seven Sisters just outside of Freer, Texas. After graduating from Freer High School, Bill attended Texas A&I University in Kingsville, Texas where he was voted "Most Likely to Succeed" and "Most Handsome". Bill's studies were interrupted by WWII when he joined the Navy and served in the Pacific. He returned from the war and completed his degree in Chemical/Natural Gas Engineering in 1949. During college, he met the love of his life, Faye Hamilton, and they married in 1948. Bill and Faye were married for 52 years until her death in 2000. After graduation, they moved to Corpus Christi where they raised their two children. Bill enjoyed a successful career in the oil and gas industry, joining Puffer-Sweiven, Inc. in 1950, early on in his career, and eventually retiring as a Senior VP in 1982. Later he added gentlemen rancher to his resume, establishing The Lincecum Ranch in Sandia, Texas, raising Beefmaster Cattle. In 2002, he married Margaret Simmons, his childhood friend from Freer, Texas.

He is preceded in death by his wife, Faye Lincecum; his parents, Merle and Clifton Lincecum; and sister, Madeline Barta. He was also a direct descendant of Dr. Gideon Lincecum, a Texas Founding Father.

He is survived by his second wife, Margaret Simmons Lincecum; his children; daughter Diane (Larry) Glover of The Woodlands, TX and son, Mark (Kim) Lincecum of Sugar Land, TX; grandchildren, Chris (Tarah) and Rebecca Glover and Paige and Grant Lincecum and one great-grandson, Greyson Glover.

In lieu of flowers, you may make a donation to Faith and Hope Foundation - dog rescue in Corpus Christi. https://www.faithandhopefoundation.org/donate.