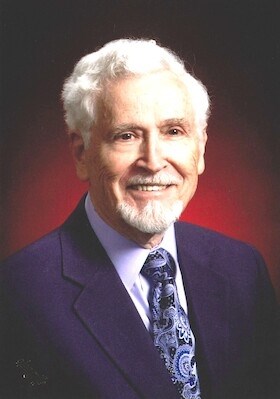 C.A. was born in rural Polk County Arkansas, on December 17, 1931 to James Burl Ward and Fanny Elizabeth Swindler. He was one of nine children who lived to adulthood. As a child his family moved to White Oak, Texas, where his father had a job in the Texas oilfields. He attended high school in the White Oak school system and was accepted to Stephen F. Austin State University where he met the love of his life, Dorothy Fay Jackson.

C.A. and Dorothy were married in 1952 at her family home in Waco, Texas. They went on to raise a family of four children.

C.A. was awarded both a Bachelor of Music degree and Master of Arts degree with a major in music and a minor in education in 1954 from SFA. Upon graduation he volunteered for military service. He was assigned to the 49th Army Band and toured and played concerts throughout post-war Europe. His memories of that time stayed with him his entire life.

He became a high school band director and later became interested in offering guidance to students regarding their studies and motivations. In that capacity he worked with the Job Corp near San Marcos, Texas, which was a program to help disadvantaged youth.

C.A. returned to school at Baylor University and completed a Doctorate in Educational Psychology in 1972, primarily studying issues related to students' motivation to learn. He was among the first people to earn such a degree in the State of Texas.

After graduation from Baylor he began working for Del Mar College in the Student Counseling Department. He became the Chair of the Department and retired in 1988.

He is survived by his wife, Dorothy, his four children, Joyce, Charles, Jr., James, and Fay, grandchildren, Jeremy, Cal, Howard, and Dennis, one surviving sibling, Verlin E. Davis, and a large extended family.

He spent the entirety of his professional life serving the educational needs of the people of Texas. In lieu of flowers, we would appreciate you supporting your local students and the teachers who educate them.

A Memorial Service will be held at 10 a.m. on Friday, October 2, 2020 at Seaside Funeral Home Chapel. Inurnment will follow at Seaside Memorial Park. The service will be streamed live online at www.seasidefuneral.com.

Published by Corpus-Christi Caller-Times from Sep. 25 to Sep. 30, 2020.
To plant trees in memory, please visit the Sympathy Store.
MEMORIAL EVENTS
Oct
2
Memorial service
10:00a.m.
Seaside Funeral Home
TX
MAKE A DONATION
MEMORIES & CONDOLENCES
2 Entries
Dorothy, I am very sorry to learn of your husband’s passing. What a dear husband, father, and grandfather who will be missed but always remembered with love. I pray for the repose of his soul. May you and your children find comfort with each other as well as with other family members and friends. ✝
Elaine Longoria-Carter
Coworker
September 27, 2020
Thinking of the Ward family as you go through this difficult time. God bless you, Jena Pickett Kauffmann
Jena Kauffmann
Friend
September 26, 2020
Showing 1 - 2 of 2 results