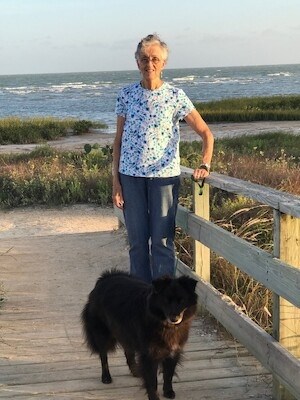 Corpus Christi - Luann Marie Suckley, age 79, of Corpus Christi, TX, passed away on June 15, 2021, from dementia. She was born in Toledo, OH, September 15, 1941 to Lionel and Margaret Scofield. After graduating from Whitmer High School (Toledo, OH) in 1959, Luann obtained her nursing degree from Maumee Valley Hospital School of Nursing in 1963, earned a B.S., cum laude, in Human Services from University of Detroit in June, 1979, and an M.A. in Management and Supervision from Central Michigan University in May, 1982. Her extensive education was of use in writing the popular textbook, Last Word in Medical Technology, published in 1985, with co-author Carol S. Rudler-Barnett.

Luann married Peter Boulton Suckley on December 19, 1962 after they met at college in Toledo when Pete was the coach of Luann's intramural basketball team. They raised two sons, Nathaniel Alison (b.1963) and Daniel Robert (b. 1967).

Luann's career was in the field of nursing, nursing education and nursing administration. She worked at hospitals in Toledo, OH and Mt. Clemens, MI, before being recruited to move south by Spohn Shoreline Hospital in Corpus Christi, TX, in August, 1983. Luann worked there until she retired in 2000.

After her retirement, Luann and her husband Pete cleared land and built a house on acreage in Wimberley, TX, where they made great friends and filled their time with caring for horses, donkeys, dogs, cats, and grandchildren. In 2009, Luann and several friends founded the non-profit for dogs, Wimberley Adoption Group and Rescue (WAG Rescue) and stayed passionately engaged in its funding and day-to-day operation until Luann returned to Corpus Christi in 2017.

Luann is predeceased by her husband, Pete, her daughter-in-law, Kathleen Marie, her grandson Dutch Alison, her parents and and her brothers Raymond John Scofield and James Edwin Scofield III.

Funeral arrangements are being handled by Funeraria Del Angel Memorial Holly Funeral Home in Corpus Christi, TX (dignity memorial.com). A celebration of Luann's life will be held July 31, 2021 at Water Street Seafood Company in Corpus Christi. Final details are still to be determined.

In lieu of flowers, donations to WAG Rescue (wimberleywagrescue.org) can be made honoring Luann.

Published by Corpus-Christi Caller-Times from Jun. 28 to Jun. 29, 2021.
To plant trees in memory, please visit our Sympathy Store.
MEMORIAL EVENTS
Jul
31
Celebration of Life
Water Street Seafood Company
Corpus Christi, TX
Funeral services provided by:
Funeraria Del Angel - Memorial Holly
MAKE A DONATION
MEMORIES & CONDOLENCES
Sponsored by Funeraria Del Angel - Memorial Holly.
2 Entries
My deepest sympathies to her family especially Dan. We used to work for Swantner and Gordan. There are no words that I am able to say that would make things better when we loose our love ones. Again my deepest condolences. Lucy
Lucy morin
June 29, 2021
So very sad to hear this news. I have such fond memories of working with Luann at Spohn Shoreline, she was a great lady and a friend!
Judy Busch
Work
June 29, 2021
Showing 1 - 2 of 2 results