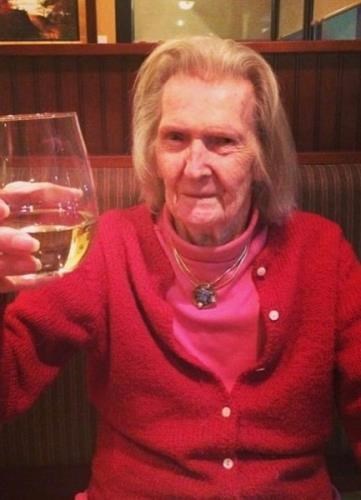 FUNERAL HOME
John M. Taylor Funeral Home
147 DUKE OF GLOUCESTER ST
Annapolis, MD
Alice Webber Cronin, nee Alice Angeline Webber, born to Ida Mae Ormand and John Claude Webber in Gaffney, South Carolina, died peacefully in her Annapolis home of 64 years. Claude was a power plant engineer and progressive farmer in Blacksburg, SC. Ida was a teacher, a Sunday school teacher, and the family historian. Alice was an only child. She entered Limestone College at 15 and graduated magna cum laude with a degree in chemistry and received an award for "exceptional scholarship, socially directed." She taught English and French in Georgia and South Carolina high schools, and, having a gift for music, founded a chorale group which performed throughout the South. During World War II she worked as a chemist at Aberdeen Proving Grounds where she met Gene Cronin, through his brother Bill. She and Gene married in 1946. Gene's work as a marine biologist took them to the Chesapeake Biological Laboratory (CBL) in Solomons, MD and the University of Delaware Marine Lab at Lewes. He became the director of CBL for 25 years. The growing family, John (1949), David (1951), and Lewis (1954) moved to Annapolis in 1955. As well as raising three sons, Alice was active in local organizations, such as local PTA, Bay Ridge garden club, local AAUW, of which she was president, and founded 2 book clubs. She was a founding member of the Atlantic Estuarine Research Society. She also found satisfaction in substitute teaching. She enjoyed classical music, reading, traveling, and decorating her beautiful home. Her wry sense of humor led her to write many short poems, treasured by family and friends. Alice was predeceased by husband L. Eugene Cronin ('98) and Lewis Eugene, Jr. ('02). She is survived by sons John (Ania) and David (Carol); and grandchildren Emilia Ann, Sean Eugene Zbigniev (Katie), Alec Ormand, and Andrew Dorsey. In lieu of flowers, contributions to Planned Parenthood are appreciated. A memorial celebration will be announced at a later date. An online guest book is available at www.johnmtaylorfuneralhome.com
Published by The Capital Gazette on Jan. 16, 2022.
To plant trees in memory, please visit the Sympathy Store.
MEMORIAL EVENTS
To offer your sympathy during this difficult time, you can now have memorial trees planted in a National Forest in memory of your loved one.
Funeral services provided by:
John M. Taylor Funeral Home
MAKE A DONATION
MEMORIES & CONDOLENCES
0 Entries
Be the first to post a memory or condolences.