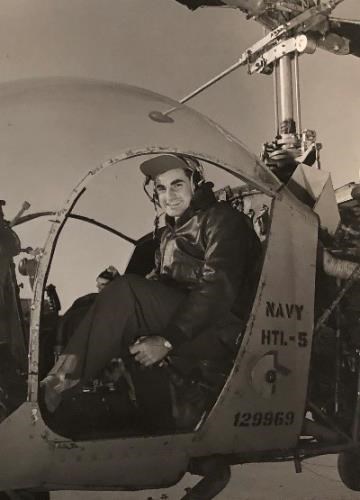 FUNERAL HOME
Barranco Severna Park Funeral Home & Cremation Care, P.A.
495 Ritchie Highway
Severna Park, MD
Captain James A. Esposito USCG (ret), peacefully passed into a state of grace on September 11th, 2021. He is survived by his loving sister Mary Jane Spanfelner of Denver, CO and his six loving children: Beth Alice Esposito, James A. Esposito, Jr. and wife Teresita; Commander Donna Sengelaub, USN (ret) and husband, LTC George H. Sengelaub, III USA (ret), Arnold J. Esposito and wife Christina, Captain John M. Esposito, USN (ret) and wife Maureen, and Regina Morgan and husband Lee, eleven grandchildren Elizabeth, Brian, Krista, Allison, Arnold Jr., Alaina, Camille, Carolyn, Matthew, Colleen and a number of extended family members and friends. He was predeceased by his loving wife of 60 years Joan Capecelatro Esposito in February of 2016, his grandson James A. Esposito, III and his parents. Jim was born in Utica, NY on 1 December 1931 to Nuncio and Genevieve Esposito, both first generation Italian Americans who instilled in him the importance of family, hard work and decency to all. He graduated from Thomas R. Proctor High School in 1949 where he met his loving wife, Joan. Following high school, he attended Oswego State Teachers College in Oswego, NY where he earned a BA in Industrial Arts Education. Following graduation in 1953, he became a Naval Aviation Cadet (NAVCAD) and entered Flight School in Pensacola, FL. Upon earning his Wings of Gold in March of 1955, he was designated a helicopter pilot and commissioned as a Second Lieutenant in the United States Marine Corps. He and Joan married in July of 1955 and settled in Camp Lejeune, NC. Following his service in the USMC, Jim and Joan relocated to Albany, New York where he taught school while awaiting a commission in the US Coast Guard. In 1959 Jim and Joan settled in Oceanside, New York where Jim flew both fixed wing and rotary wing rescue missions from USCG Station Floyd Bennet Field in Queens, NY. In 1966 the family moved to Temple Hills, Maryland where Jim took concurrent assignments in Washington, DC, the USCG Yard in Curtis Bay, Maryland, and USCG Fifth District in Portsmouth, VA. He concluded his 26 years of service on 1 December 1980 at Coast Guard Headquarters in Washington, DC. Jim and Joan relocated to Annapolis Maryland in 2006 and finally in 2014 to Knollwood Retirement Community in Washington, DC. In the 41 years following his retirement from the Coast Guard, Jim focused on employment where he could engage people on a personal level and make positive and lasting impact on the community and the lives of others. These pursuits included service as a District Court Commissioner for the State of Maryland where he enjoyed working with and supporting law enforcement, and as the Enlisted Barracks Manager on the Naval Station in Annapolis, Maryland. It was in this position he found himself drawing on his leadership experience and values instilled by his parents as he mentored and counseled countless sailors who lived in the barracks. He was so well respected, that upon his retirement in 2014, a section of the barracks was dedicated to him in recognition of his efforts and commitment in shaping the character of young sailors. Jim was a member of the Knights of Columbus, the Reserve Officer's Association, and the Ancient Order of the Pterodactyl, the Coast Guard Aviation Association. For all who knew Jim, he was a true craftsman who enjoyed working with his hands and learning about the experiences of others. He was always full of ideas and eternally optimistic, with the sole purpose of brightening someone's day or bringing a smile to someone's face – to include his decades of playing Santa Claus in support of local community events. Jim had a unique gift of touching people in a special way that made a lasting impression – he was a stranger to none. He will be missed by his sister, children, extended family, the staff of Knollwood, the Walter Reed Dialysis Clinic and countless others whom he touched with his smile and perpetual optimism. Family and friends may visit on Saturday, September 18, 2021, from 4:00PM- 8:00PM at Barranco Severna Park Funeral Home & Cremation Care, P.A., 495 Richie Highway, Severna Park, MD. A funeral mass will be held at a future date in conjunction with interment alongside his wife Joan at Arlington National Cemetery. In lieu of flowers, donations can be made in James' memory to: St. Jude Children's Research Hospital, 501 St. Jude Place, Attn: Memorials Memphis, TN 38105 1800-822-6344 Fund # 22577355/In Memory: James A. Esposito, Sr. OR The American Red Cross Walter Reed Military Medical Center Fund Services to Armed Forces, 8550 Arlington Blvd., Fairfax, VA 22031, 703-584-8400, In Memory: James A Esposito. Online condolences may be made at www.barrancofuneralhome.com
Published by The Capital Gazette on Sep. 16, 2021.
To plant trees in memory, please visit the Sympathy Store.
MEMORIAL EVENTS
Sep
18
Visitation
4:00p.m. - 8:00p.m.
Barranco Severna Park Funeral Home & Cremation Care, P.A.
495 Ritchie Highway, Severna Park, MD
Funeral services provided by:
Barranco Severna Park Funeral Home & Cremation Care, P.A.
MAKE A DONATION
Please consider a donation as requested by the family.
MEMORIES & CONDOLENCES
0 Entries
Be the first to post a memory or condolences.