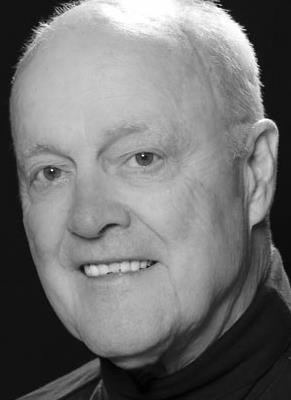 The Annapolis community lost a shining star on Sunday, September 3rd when Edwin Hampton Wintermute IV died unexpectedly of cardiac arrest in Austin, Texas while visiting his daughter. Ed was born in Gladstone, NJ, on October 8, 1933, and lived in many towns across the Northwest, traveling with his parents and seven siblings through the lean times of the Depression. He was valedictorian of Haslett High School in Michigan in 1951 and attended Michigan State University on scholarship. He hitchhiked to classes and supported himself working as a bellboy in a hotel. He graduated with a Bachelor's and then a Master's degree in Physics in 1955. He served in the US Army 1955-1958, then took a job at HRB Singer in State College, Pennsylvania, where he met a young woman reading a book in her backyard and she became his wife of 54 years. He married Elizabeth Ann O'Neill and they shared international adventures, living their first year together in Sagamihara, Japan, and then five years in Weiss, Germany where both became fluent in German. Raising four children together, they moved back to State College and eventually to Arnold, Maryland in 1976 where he worked at the National Security Agency until 1998. Ed crafted an exemplary retirement, filling his days in pursuit of his passions. An exercise enthusiast before that was cool, he logged many miles and regularly raced with the Annapolis Striders. He studied diverse scientific and musical topics at Anne Arundel Community College in their Senior classes, and traveled on hiking and fishing trips in the Northwest US, all the while spending time as a loving father and grandfather of eventually 11 grandchildren. Most notably he will be remembered as a frequent and formidable presence on community theater stages. He performed regularly with Annapolis Opera, Annapolis Summer Garden Theater, Colonial Players, Anne Arundel Community College, Pasadena Players, 2nd Star Productions, Spirited Productions, Chesapeake Music Hall, and the Annapolis Chorale, and filled St. Mary's Church with his glorious tenor voice many a Sunday as a cantor and ensemble member. In addition to contributing his singing and acting talents, he served as a mentor to many young artists whom he counted as friends. Ed was such an avid participant in theatre productions he occasionally received calls from directors to fill gaps in their casts, and he made time for virtually every offered opportunity. Among his many performances, stand-out roles include Oliver Warbucks in Annie, the Narrator in Into the Woods and Charlie Cowell in The Music Man, at Annapolis Summer Garden Theater and Victor Velasco in Barefoot in the Park at Colonial Players. He especially enjoyed the show 1776, playing various characters in productions at a series of local venues. He performed in all but one season of Colonial Players' locally famous perennial production of A Christmas Carol, most frequently as the Ghost of Christmas Present, though one year he played Scrooge, and as his swan song in 2016, he graced the program cover and haunted the stage as the Ghost of Christmas Past. He also served his community as a volunteer for the Chesapeake Bay Foundation. He was past President of the Arundel Vocal Arts Society and Colonial Players. Ed is survived by his wife Elizabeth, two of his four children, Catherine Hollerbach and her husband Pete of Annapolis, and Karen Keough and her husband Le of Austin, Texas, his son-in-law, David Gold of Frederick, Maryland and daughter-in-law Katherine Harrison Wintermute in Portland, Oregon. He joins his two beloved children who went before him, Jochen Wintermute of Portland, Oregon and Jessica Gold of Frederick, Maryland. He will be fondly remembered by his 11 grandchildren: Rebecca and Mark Hollerbach, Caroline Hollerbach Wood (Tyler), Seth and Kelsey Richards, Raegan and Ryan Keough, Lilly and Andrew Gold, and Forrest and Griffin Wintermute. Perhaps he was best suited to play the Ghost of Christmas Present; after all, Ed lived a life guided by that character's message: "our pockets are empty...no matter you see...this cornucopia is ours and it's free." A funeral mass will be held for Ed on Saturday, September 23 at 9:00 at St Mary's Church, 109 Duke of Gloucester Street, Annapolis MD. A celebration of his life will follow at 10:30 AM at Children's Theatre of Annapolis, 1661 Bay Head Road, Annapolis MD. Memorial donations can be made to Annapolis Summer Garden Theater, 143 Compromise Street, Annapolis, MD 21401, or at summergarden.com.


Published by The Capital Gazette on Sep. 13, 2017.
To plant trees in memory, please visit the Sympathy Store.
MEMORIAL EVENTS
To offer your sympathy during this difficult time, you can now have memorial trees planted in a National Forest in memory of your loved one.
MAKE A DONATION
MEMORIES & CONDOLENCES
16 Entries
I had the very good fortune to serve on the Twin Harbors Community Association Board of Directors with Ed. Never did a moment pass for which Ed did not have a positive word to include in any discussion. Ed was always an uplifting presence. I enjoyed how lovingly and happily he shared stories of his family for which he loved so deeply. Ed was a good man and those who new him were blessed. To his family, thank you for sharing him with us. He loved you very much.
Patrick Hannigan
September 27, 2017
Dear Beth Ann,
As a couple of your High School classmates, Judy and I were saddened to learn of Ed's passing. May you and your children and grandchildren find comfort and strength in the happy memories of your lives together. Blessings and peace.
Damian & Judy Neuberger
September 21, 2017
Love always..Beth
Elizabeth Wintermute
September 20, 2017
Ed and Colonial Players' A Christmas Carol are inseparable in my heart and mind. I will forever treasure my warm memories of this family man, this gentleman, this gentle man. Godspeed, dear Ed. I miss you already. Dear Wintermute family, you have my heartfelt condolences and my prayers.
Debbie Barber-Eaton
September 18, 2017
Ed and A Christmas Carol go hand in hand as far as I'm concerned. He was always kind, considerate, positive and all sorts of other good things too numerous to mention. He was a consummate trooper at Colonial Players. In his final appearance in A Christmas Carol last year, he came down with a bad virus and was very ill, but continued on. I'm saddened that he was too sick for the closing performance to take his final bow.

Tom Stuckey
September 16, 2017
best boss i ever had
john campbell
September 16, 2017
Ed was a kindhearted gentleman who always had a positive attitude and an encouraging word. It was an honor and a pleasure to perform with him. My thoughts and prayers go to his family.
Aubrey Baden III
September 15, 2017
what a truly remarkable man, and what a beautiful tribute..He was obviously an amazing role model and mentor for all your own successes, Karen. Love and sympathy to you and your whole family.
Sharon Lockhart
September 14, 2017
Ed, you will be so missed. You were always smiling. My niece,Tiffani, will remember always her one night as Annie with you as Warbucks. I will remember all of our times on the stage and the operas we did together. I love your family. You all are in my heart.
Sue Centurelli
September 14, 2017
Having had the honor of knowing Ed over 35 years (beginning with the first production of Wade/Gessner's A Christmas Carol, at CP) I knew him to be a man of integrity & elegance. His passion for music & performance was only succeeded by a deep, abiding love for his family. And, together with Beth, WHAT a family! What a legacy! Full & rich, Ed's was truly a life well-lived. May treasured memories rise and bring comfort now & always. And to you, Ed: a last "break a leg, kid!"
Nori Morton
September 14, 2017
May the Heavens be delighted with your talent. You are a shining star.
September 13, 2017
God bless you, Ed, and the Wintermute family. Our prayers and thoughts are with you all.
September 13, 2017
Thanks for being who you were, Dad. You will live on in all of us!
Daughter
September 13, 2017
What a wonderful tribute. thank you for posting a story about Ed. I am most sorry that I didn't know him better. Cousin, Donna Butterfield.
Donna Butterfield
September 13, 2017
It was a wonderful life. Deepest sympathy to all the family.
Judith Cummings
September 13, 2017
The best father & grandfather anyone could ever have. Miss you so much, Dad!
Love, Karen
Karen Keough
September 13, 2017
Showing 1 - 16 of 16 results