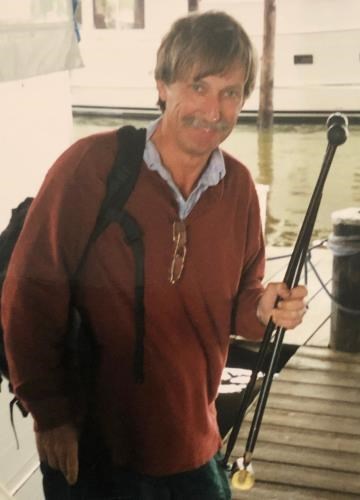 Peter H. Hartoft of Annapolis, MD passed away July 1, 2019. Born April 8, 1946 in Copenhagen, Denmark, to Aasa and Orla Hartoft, Peter attended the University of Copenhagen where he studied medicine. In 1971, he moved to the United States with his first wife, Anne Westergard, and began his career in the marine industry. Peter established Hartoft Marine Survey in 1980 where he worked until his death. Peter revolutionized the survey format making it easier for buyers, sellers, brokers, banks, and insurance companies to understand a marine survey. He and his life partner, Gale Browning, dominated the marine survey market in the Mid-Atlantic region, and much of the Eastern seaboard. Peter was an avid sailor, and active member of the Annapolis Yacht Club for nearly 40 years. He sailed many races in the Chesapeake Bay from the 1970s to the 1990s. He also did many coastal deliveries for his business. Known for living life full throttle, Peter enjoyed cycling, windsurfing, skiing, photography, art, music, good food, motorcycles, and cars. He loved dogs and very well could have been known as the "dog whisperer". Peter had a distinctive sense of humor, and enjoyed a good laugh. He was an avid reader and tech-enthusiast. Peter is survived by his sister, Helene Jorgensen, of Aarhus, Denmark, and nephews, Morten and Rasmus Jorgensen, the children of Gale Browning: Zack, Jeremy and Nathan, and grandson, Jacob Browning, and wives, Anne Westergard, and Martha Hardesty, in addition to her daughter, Michelle Baker, and grandson, Wilson Vest. Peter is remembered with love, and missed by a community of friends and family both near and far. There will be a private gathering of friends at a future date to remember Peter. We hope all who knew and loved him will carry his memory in their hearts, remembering how a man from Denmark moved to Annapolis and contributed to the seafaring culture of our beautiful Chesapeake Bay town.
Published by The Capital Gazette on Jul. 9, 2019.
To plant trees in memory, please visit our Sympathy Store.
MEMORIAL EVENTS
To offer your sympathy during this difficult time, you can now have memorial trees planted in a National Forest in memory of your loved one.
MAKE A DONATION
MEMORIES & CONDOLENCES
8 Entries
So sorry to hear this news. But while we shed some tears, We can find solace that Peter has only crossed the rainbow bridge to be with Gale.
Jerry and Roanna Cann
July 29, 2019
Luke 5:1-11
Then He said to them all: If anyone desires to come after me, let him deny himself and take up the cross daily and follow Me
For whoever desires to save his life will loose it, but whoever looses his life for My sake will save it will save it
God Bless your Peter
Michael Previti
July 18, 2019
What a wonderful synopsis of Peters life. He was always so kind to me and for that I will forever remember him fondly. Many condolences to his family during this difficult time
Amber Frank
July 10, 2019
Words are so difficult. I miss you Peter!
July 9, 2019
With fond memories of many laughs and bike rides. Thank you for lighting up our lives Peter. You are now a new star in the sky. xo Debbie Nielsen
July 9, 2019
I just cannot find the words. So sad.
Paul Lippincott
July 9, 2019
So sad. Peter will be greatly missed...
Julie Husson
July 8, 2019
To the family of Peter. I am very sorry for your loss. I have known Peter and Gale for many years. May each finally Rest In Peace! I hope that hey have been reunited, I know Peter missed his Gale for many years. Rest In Peace my friends!
Denver Sanner
July 8, 2019
Showing 1 - 8 of 8 results