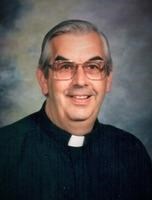 BORN
1945
DIED
2021
FUNERAL HOME
Heath Funeral Home
701 Lingle St
Osceola Mills, PA
The Reverend Monsignor Henry Desmond McGee, Jr.
December 14, 1945 - October 15, 2021
DuBois, Pennsylvania - The Reverend Monsignor Henry Desmond McGee, Jr., age 75, passed away at his residence in Christ the King Manor, DuBois, Pennsylvania on Friday, October 15, 2021. He was born on December 14, 1945 in Philipsburg, Pennsylvania, the son of Henry Desmond, Sr. and Vivian (McLarren) McGee. He attended Lincoln Consolidated Elementary School, Philipsburg Junior High School and Philipsburg-Osceola Area Senior High School from which he graduated in 1963.
He entered St. Mark Seminary (Erie) in 1963 and began studies at Gannon College (now University). He completed his studies and formation for the priesthood at St. Mary's Seminary in Baltimore, Maryland, and was ordained a priest on May 20, 1971 by The Most Reverend Alfred M. Watson at St. Peter Cathedral, Erie.
He began his priestly ministry as Parochial Vicar of St. Francis of Assisi Parish, Clearfield, and remained there until 1981 when he was assigned to be Parochial Vicar of St. Michael Parish, Greenville, with service in campus ministry at Thiel College. In 1987 he was named Headmaster of Bradford Central Christian High School and Weekend Assistant at St. Francis of Assisi Parish in Bradford and remained in that capacity until 1999. On May 30, 1996, Msgr. McGee was appointed a Chaplain to His Holiness with the title of Monsignor.
From 1997 to 1999 he served in several temporary capacities including in the Diocesan Office of Matrimonial Concerns, as Parochial Vicar of St. Joseph Parish, Warren, and as Administrator of Christ the King Parish, Houtzdale. The latter of which he was appointed Pastor in 1999.
In 2002 Msgr. McGee became Pastor of St. Francis Of Assisi Parish, Clearfield, where he remained until it became necessary to take a health leave in 2014. During that time, he was called upon to be Parochial Administrator of several parishes including St. Timothy Parish, Curwensville, St. Bonaventure Parish, Grampian, Christ the King Parish, Houtzdale and Holy Trinity Parish, Ramey. From 2014 until his death, he was a resident of Christ the King Manor in DuBois, serving for a time as Interim Chaplain.
In addition to his school and parish duties, Msgr. McGee served the Diocese of Erie in numerous administrative capacities including membership at various times on the Pastoral Advisory Board, the Priests' Personnel Board, the Presbyteral Council, the Clergy Continuing Education Committee and the Bishop's College of Consultors, and as Dean of the Clearfield Deanery.
Msgr. McGee was preceded in death by his parents, the late Henry D. McGee, Sr. and Vivian H. (McLarren) McGee. He is survived by his sisters, Theresa Jess (companion Anthony Caporelli) of Hammonton, New Jersey, Frances Shaffer (Rick) of Philipsburg, Pennsylvania, and Mary Ann Klunk (William) of Pittsburgh, Pennsylvania, and by his brothers Bernard (Patricia) of Haddonfield, New Jersey, Daniel (companion Barbara Gallo) of Bellefonte, Pennsylvania, Michael of Philipsburg, Pennsylvania, and Joseph (companion Laurie Knepp) of Philipsburg, Pennsylvania.
Visitation will take place on Wednesday, October 20 from 5:00-8:00pm at Immaculate Conception Catholic Church, 408 Stone St., Osceola Mills, PA 16666, with a Vigil Service at 7:00pm, and on Thursday, October 21, also at Immaculate Conception Catholic Church, from 9:00am to 10:45am followed by the Funeral Mass at 11:00am with Bishop Lawrence Persico as the main celebrant. Burial will be at Immaculate Conception Catholic Cemetery, Osceola Mills.
In lieu of flowers memorial contributions may be made to Christ the King Manor, 1100 W. Long Ave., DuBois, PA 15801, in gratitude for the dedicated and devoted care given to our brother.
Heath Funeral Home & Cremation Services, LLC in Osceola Mills, PA is in charge of the arrangements.
To sign the online guestbook go to: www.heathfuneral.com