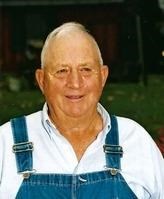 BORN
1929
DIED
2021
FUNERAL HOME
Daughenbaugh Funeral Home Inc
228 S Pennsylvania Ave
Centre Hall, PA
Donald D "Don" Lansberry, Sr.
February 17, 1929 - May 15, 2021
Julian, Pennsylvania - Donald D. "Don" Lansberry, Sr, 92, formerly of Centre Hall, passed away peacefully on May 15, 2021 at home, surrounded by loved ones. Born on February 17, 1929 on the J.C. Meyers Farm in State College, he was the son of the late William P. and Marian R. (Glasglow) Lansberry. On June 28, 1952 in Tusseyville, he married the love of his life, Ruth E. Rimmey, who survives at home.
Don attended Boalsburg High School. He enlisted with the United States Army in February of 1947, at the age of 18. He earned the rank of Private First Class, qualified marksman for the M-1 Rifle, and was awarded the Army of Occupation Medal prior to his honorable discharge in November of 1951. He enjoyed farming and had a dairy farm that he operated until the early 1980s, at which point he started working for Unico Construction. He retired after 10+ years of service with them. After retirement, he worked as part of the maintenance crew at the Grange Fair Grounds for 18 years.
Don was a member of the Emmanuel Union United Church of Christ in Tusseyville. He enjoyed hunting but loved to fish. He was a previous member of Harris Township Fish and Game, the American Legion Smith-Pletcher Post 779, and the VFW Post 9575, previously in Potters Mills. He enjoyed vegetable gardening so much, he was known to have dug up his wife's flower gardens to make room for his vegetables. He would spend time looking out his window and watching the birds. He was passionate about his days farming and time spent in the military. He would share stories of those days to all those that would listen. He was a very loving and wonderful man that cherished his time spent with family, especially chasing around the grandchildren.
Along with his wife, Don is survived by two sons, Donald D. Lansberry, Jr and his wife, Tracy, of Boalsburg and Steven L. Lansberry and his wife, Diane, of Klingerstown; two daughters, Kathy Ryba and her husband, Earle, of Julian and Susan K. McPherson and her husband, Donnie, of Avis; 10 grandchildren, Jason Lansberry of Aaronsburg, Justin Lansberry of Potters Mills, Bethann Spackman and her husband, Chad, of Port Matilda, Anya Miller and her husband, Joshua, of Julian, Janos Ryba of Spring Mills, Lauren Haberland and her husband, Theo, of Virginia, Nicholas Lansberry and his wife, Samantha, of Landisville, Sophie Jones and her husband, Robert, of Tennessee, Seth Lansberry and his fiancé, Breanna Faul, of Williamsport, and Kyle Zettle of Lock Haven; 12 great grandchildren; and one brother, Robert Lansberry and his wife, Sandra, of Altoona.
Along with his parents, Don was preceded in death by his granddaughter, Tanya Zettle in 1986 and two brothers, William Lansberry and infant, James Lansberry.
A Memorial Service for Donald will be held on Saturday, May 22, 2021 at 11am at the Emmanuel Union UCC in Tusseyville with Pastor Craig Munnell officiating. Military Funeral Honors will be presented by the Pennsylvania Military Funeral Honors Team at the church.
In lieu of flowers, memorial contributions can be made the Emmanuel Union UCC, 120 Tusseyville Road, Centre Hall, PA 16828 or to a charity of the donor's choice.
CDC guidelines regarding masks and social distancing protocols for those that are fully vaccinated and those that are unvaccinated will be followed at all services.
Arrangements have been entrusted to Daughenbaugh Funeral Home, Inc 228 S. Pennsylvania Ave., PO Box 579, Centre Hall, PA 16828. An online guestbook can be signed or condolences to the family available at www.daughenbaughfuneralhome.com.