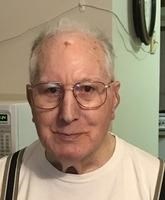 BORN
1930
DIED
2021
FUNERAL HOME
Wetzler Funeral Service Inc
206 N Spring St
Bellefonte, PA
Riale D. Torcasso
December 15, 1930 - November 21, 2021
State College, Pennsylvania - Riale D. Torcasso, 90, of State College,, formerly of Bellefonte, and originally from Industry, Pennsylvania, passed away on Sunday, November 21, 2021, at Wynwood House at Green Hills in State College. Born on December 15, 1930, in Pittsburgh, he was the son of the late Domenick and Vincenza (Varvaro) Torcasso. On January 23, 1964, he married his wife, Patricia (Lamp) Torcasso, who preceded him in death in October 2011, after sharing over 47 years of marriage together.
Riale was a graduate of Lincoln High School in Midland, Pennsylvania. He served in the United States Navy from April 1952 until he was honorably discharged in March 1956. After his time in the service, he started a business with his brother, Julius, Torcasso Brothers Building and Remodeling, until his retirement in 1985.
He is survived by one daughter, Teresa Burbidge (Robert) of Bellefonte, and two grand-cats, Pepper and Woody. Also surviving is a brother, Julius Torcasso (Marilynn), of Industry, Pennsylvania, numerous nieces and nephews, great nieces, and nephews, and four great-great nephews.
In addition to his wife and parents, he was preceded in death by a sister, Fiorina Brookley, and two brothers, Raymond Torcasso, and Richard Torcasso.
Funeral services and burial will be private at the convenience of the family. Arrangements are under the direction of Wetzler Funeral Service, Inc. in Bellefonte.
Online condolences may be made to the family at www.wetzlerfuneralhome.com.

Published by Centre Daily Times on Nov. 28, 2021.
To plant trees in memory, please visit the Sympathy Store.
MEMORIAL EVENTS
To offer your sympathy during this difficult time, you can now have memorial trees planted in a National Forest in memory of your loved one.
Funeral services provided by:
Wetzler Funeral Service Inc
MAKE A DONATION
MEMORIES & CONDOLENCES
Sponsored by Centre Daily Times.
0 Entries
Be the first to post a memory or condolences.