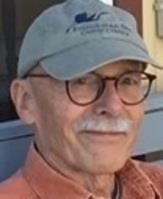 BORN
1941
DIED
2021
FUNERAL HOME
Koch Funeral Home - State College
2401 S. Atherton Street
State College, PA
Richard L. Barton
February 22, 1941 - August 21, 2021
Centre Hall, Pennsylvania - Richard L. Barton passed away peacefully on Aug. 21, 2021 at his home, as was his ardent wish, with his wife and dear friend at his side.
Dick was a scholar, environmentalist, sage, wit, musician, cyclist, jokester, husband, free spirit, friend, mentor, "dogster".
Born in Terre Haute, Ind. on Feb. 22, 1941, he grew up in Dayton, Ohio with his parents, sister, grandmother, and his select group of friends, the Dayton boys, who were an influence on his life to the end. Dick was a boy with a bike and paper route who listened to late night radio and loved his grandma's cinnamon rolls. He was a track man from grade school on and became a radio announcer in his teens.
His first advanced degrees were from The Ohio State University and Ohio University. He studied poetry, honing his love of word play, claiming he didn't need drugs to see chairs dancing. His father's death during his freshman year compelled him to grow up fast and to be self-reliant.
Dick married Ann in 1968 - that tumultuous year - and together they took off for their big adventure in the Pacific Northwest. It was at the University of Oregon that he received his PhD in Communications.
The newly minted Dr. Barton arrived at The Pennsylvania State University in 1972, in a Triumph 250, packed to the gills with all his belongings, Ann and a dog to begin his long and fruitful career, culminating with an associate deanship in the College of Communications. He wrote a book, did research, served on committees, but mostly tended to his students, guiding them through the critical moments of their development. Dick introduced undergraduates to a bigger world view through forays to Canada and England. He instilled good teaching practices into the grad students under his watch, embraced the recruitment of student diversity, and was mentor for many around the world.
He loved Maine, spending his summers there, pursuing environmental endeavors and enjoying its sheer beauty.
Dick lived in his beloved old farmhouse with his wife, his musical instruments, and his ever-evolving family of dogs and cats, most recently his black lab and ginger cat. He watched baseball, birds, and people - relishing their quirks.
His wonderful eclectic collection of friends came from all over and he was happiest when playing music with them or engaging them in incisive conversation. He would be delighted if they chose to give a gift of kindness to our "four-legged" creatures and/or Mother Nature in his memory.
Dick Barton was a force to be reckoned with - admired, applauded, appreciated and loved. He will be missed unabashedly.
Arrangements are under the care of Koch Funeral Home, State College. Online condolences may be entered at www.kochfuneralhome.com.

Published by Centre Daily Times on Sep. 12, 2021.
To plant trees in memory, please visit the Sympathy Store.
MEMORIAL EVENTS
To offer your sympathy during this difficult time, you can now have memorial trees planted in a National Forest in memory of your loved one.
Funeral services provided by:
Koch Funeral Home - State College
MAKE A DONATION
MEMORIES & CONDOLENCES
Sponsored by Centre Daily Times.
4 Entries
Dr. Barton was associate dean for research when I came to Penn State in 1999 as a freshly-minted assistant professor. I will always be thankful for his kindly mentorship, his generosity with time and advice, and his gentleness and wisdom. A good man -- we will all miss you, Dr. Barton.
Krishna Jayakar
September 14, 2021
Ann, I´m so sorry for your loss. Dick was my professor as an undergraduate and then we ended up as co-associate deans in the College of Communications. I always considered him a mentor - his wisdom and counsel to me were so appreciated. His sense of humor was second to none. A truly wonderful person. Bob
Bob Richards
September 13, 2021
Ahhh, Dick, I remember fondly the musical evenings with you, Ann, Jeremy and I. It has been some time since we made some music together and I regret that we had not done so for awhile. Good intentions left hanging. Ann, my condolences to you and a fond farewell to Richard! May he rest in peace and in our memories...
Michael Arthur
Friend
September 13, 2021
Dick Barton was a wonderful mentor. His wisdom helped many PSU graduate students to achieve impressive things. I was fortunate to have worked with him for several years and learned much as a result. Condolences to Ann and all others in his family. He will be missed.
Bob Trumpbour
September 13, 2021
Showing 1 - 4 of 4 results