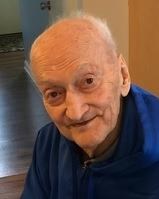 Published by Centre Daily Times on Dec. 31, 2020.
To plant trees in memory, please visit our Sympathy Store.
MEMORIAL EVENTS
To offer your sympathy during this difficult time, you can now have memorial trees planted in a National Forest in memory of your loved one.
Funeral services provided by:
Mark D. Heintzelman Funeral and Cremation Services P. C. - State College
MAKE A DONATION
Please consider a donation as requested by the family.
MEMORIES & CONDOLENCES
Sponsored by Centre Daily Times.
6 Entries
❤Richard was my all-time favorite❤ I never had so much fun, as when I was taking care of him and Inez I'm so saddened to hear of his passing.
Kristine Johns
Friend
January 10, 2021
I really enjoyed helping take care of your dad I would always ask how he was doing after I left Elmcroft. You will be missed Richard. I will always miss us goofing off fly high buddy
Terry
Friend
January 3, 2021
Sad to see this note of Dick's passing. We have such fond memories of his participation with Inez in the Old Newcomers Bridge Group for the many years we lived in State College. He loved to announce the player scores by "quartile" so no one felt like a "loser"! May his memory be for a blessing. Ann and Bill Millman, Long Beach, CA.
Ann L Millman
Friend
December 31, 2020
Dave, sorry to hear about your dad. Miss seeing you down here for B ball tourney. If ever heading to Topsail or NC beaches, let me know! Would love to see you!
Loren Adams
Friend
December 31, 2020
As the days and weeks pass, and as you return to life's routine, may you continue to feel comforted by the love and support of family and friends.
Regina DUKES
Friend
December 30, 2020
Im going to miss my pool buddy and friend
Regina Dukes
Friend
December 30, 2020
Showing 1 - 6 of 6 results