Robert F. Trehy January 27, 1921 - November 22, 2009 Bob Trehy, of State College, died in the comfort of his residence at The Village at Penn State on Sunday, Nov. 22, 2009. He was born in New York City, the son of the late James and Julia Kighery Trehy. On July 4, 1946, Bob married his beloved Maxine. They were married for 54 blissful years until her death on April 10, 2000. In addition to his wife, his death was preceded by his sister Mary, and brothers William, James and John. Bob is survived by his adoring son Rob. Bob attended the Xavier High School and the Mannes School of Music in NYC. He was a veteran of WWII. Robert Trehy studied in New York City and Vienna and received his training in Europe. As an eminently successful young baritone, he sang in leading opera houses of Germany for four years and concertized extensively throughout Austria. He appeared in major roles at the International festivals of Salzburg, Berlin, Holland, Wiesbaden, and Belgrade. When he returned to the United States, he sang with the New York City Center Opera, as well as the Boston, Washington, Santa Fe and Central City opera companies. He also appeared in various musical events at Town Hall and Carnegie Hall, as well as on ABC television in several operas and in the world premiere of Earl Wild's Oratorio Revelations. Also of note, Mr. Trehy was the cantor at St. Patrick's Cathedral in New York City from 1966 - 1969. As a full professor, Mr. Trehy taught concert and opera vocal repertoire at Penn State from 1969 to 1983. He was also a fellow at the Institute for Arts and Humanistic Studies. As a retired emeritus professor, he continued to sing in concerts nationwide. Perhaps his finest performances were those that he gave at The Village at Penn State, where he resided very happily for the last five years of his life. He sang until the final day of his life. Visitation will be on Saturday, Nov. 28, 2009, from 10:30 a.m.-12:30 p.m., at Koch Funeral Home, 2401 S. Atherton, State College. The funeral service will be at Our Lady of Victory Catholic Church on Saturday, Nov. 28, 2009 at 1:30 p.m. with Monsignor David Lockard officiating. Interment will be at Spring Creek Presbyterian Cemetery. Memorial contributions may be made to Penn State University School of Music, University Park, PA 16804.

To plant trees in memory, please visit our Sympathy Store.
Published by Centre Daily Times on Nov. 24, 2009.
MEMORIAL EVENTS
No memorial events are currently scheduled.
To offer your sympathy during this difficult time, you can now have memorial trees planted in a National Forest in memory of your loved one.
MAKE A DONATION
MEMORIES & CONDOLENCES
12 Entries
Dear Rob: Thinking of you today and praying for your Dad on the first anniversary of his death. He will always be with me....Love from your cousin, Regina xxoo
Regina Trehy
November 22, 2010
Rob, as you know, Bob was not only my uncle but my Godfather. I have nothing but wonderful things to say about him. In the summer of 1963, as you will recall, some girlfriends and I visited Bob, Maxine, and you in Germany on our European Tour. He was performing "Annie Get Your Gun" in German, and we had the privilege of seeing him perform with Heidi Bruhl. What a wonderful performance!! ... I will never forget it. I really regret that I could not attend the services for Bob at Penn State ... but please know that I loved him very much and that Gene and I miss him greatly. Much love, Joan (Trehy Pritchard)
December 7, 2009
Such a beautiful voice is never silenced. His grace and kindness matched his incredible voice. Musicians don't die, we just play or sing in a different key.
Evelynn Ellis
November 30, 2009 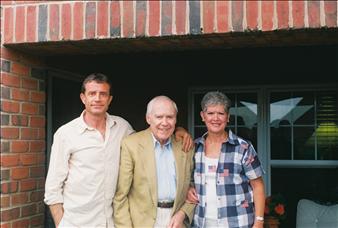 "God gave us memories so we can have roses in December"....My Uncle Bob will always live on in my mind and my heart. He will never be forgotten. He brought such joy into many lives with his beautiful music and now he is one of those angels singing in the choir. I love you Uncle Bob, rest in peace. Love your niece, Regina
November 30, 2009
Dear Rob,

My deespest condolences. I regret deeply that I can not be with you in State College.

Your dad was a man of passion, loyalty and integrity. And he led a life full of love, devotion, contentment and happiness. I am sure when he sang his very last Mozart, he was also telling you how much he loved you.

Rob, your dad will be terribly missed and my prayers and thoughts are with you.
Mimi Kim
November 29, 2009
Rob,

I am so sorry to hear about your dads passing. I have been home in New York for the week but I regret that I was unable to be at The Village these past few days.

One of the highlights of my time at The Village was getting to know your dad for the great man that he was. Not only do I admire all that he accomplished throughout his life, but I also look up to his passion and character.

That picture from his room of Southern Italy is now hanging in my house! I hope you know that he will be greatly missed and that he will always be in my heart; my thoughts are with you.
Vanessa DeVito
November 24, 2009
Rob,
Back in the 1970's, I had the pleasure of seeing your father play the lead in South Pacific on the Penn State Campus. What an absolutely wonderful experience that was. I then had the pleasure of taking a year of voice lessons from him. I learned lessons to last me a lifetime. My deepest sympathy to you. He will truely be missed.
Pamela Smith
November 24, 2009
Bob Trehy was simply a joy to be around! His voice was so rich and sweet even in his last years, which seemed to be a source of bemused wonder and joy to him. I loved hearing stories of the great singers, conductors, and composers he worked with during his career. He shared his musical gifts with so many, and I'm proud to have known him. We will miss him.
Alex Hill
November 24, 2009
Dear Rob,

I knew your dad for a relatively short time - I got to know him in person when I began directing music at OLV in 1998, and we were beginning to train cantors. Before that, I knew him by reputation as a wonderful coach and voice teacher at Penn State.
I will never forget your dad's generosity in working with our cantors to inspire them to master legato and singing with energy and spirit, even in church! He was a perennial inspiration to me as well. He was always willing to get up and cantor 7:30 mass, and he sang our humble Catholic ditties willingly and without complaint, even though he had sung the greatest classical music in his time. It was always such a pleasure to be with him. He enjoyed life so much! He was really a perfect example of how to integrate your work and your life with joy and graciousness. Our choir will miss him so much when we go caroling at Penn State Village this year. It will never be the same...I covet his prayers and will be asking him to look down on us and help us continue to give our very best in our music-making at OLV.
Sara Hopkins
November 24, 2009
Rob,

How sorry I am to hear of your father's death. As you know I am at the Stravinsky archive in Basel and will not return in time for the funeral.

I must have sensed that Bob was about to leave us because on Monday, I was thinking about him as I read through some of W.H. Auden's correspondence with Stravinsky. Included with the materials was Auden's Elegy for J.F.K. Here is one of the paragraphs:

When a just man dies,
Lamentation and praise,
Sorrow and joy are one.

How appropriate for your dear father. When I visited him a few weeks ago, he greeted me by singing "When Irish Eyes are smiling." We had a memorable visit and I told him that my brother Bernie would tell everyone at Xavier that I had seen him. At the mention of Xavier, he smiled and said: "Oh, Xavier!" Through the years we had great conversations about his Jesuit education. The fact that one of his mentors, Tom Burke, S.J. was one of my father's classmates was always a special link for us.

Our conversations about Stravinsky were numerous and informative, especially since Bob was on a concert tour with Igor.

I can assure you that you will derive great peace from all of the wonderful things that you did for both of your parents. They were so proud of you.

Your father was one of the finest people I have ever known in my life. A true gentleman, an excellent musician, he was always there for those of us who had the fortune and honour of studying with him. His performances of Schubert's WINTERREISE, especially one at the National Gallery of Art in the early 1970s, will always be treasured memories for me. My life and the lives of many are richer in so many ways because of him. He will be missed but he will always be a part of us. Know the deep gratitude we have for his life and presence among us.
Walter Wells
November 24, 2009
Rob, my deepest sympathy in the loss of your father. May your memories keep him close to your heart. You are in my thoughts and prayers.
Karen Crivella-Jervis
November 24, 2009
Showing 1 - 12 of 12 results