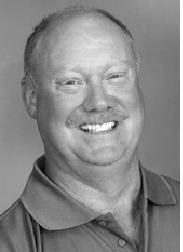 FUNERAL HOME
Koch Funeral Home - State College
2401 S. Atherton Street
State College, PA
Terry E. Addleman August 6, 1961 January 24, 2019 Terry E. Addleman, 57, of Boalsburg, died Thursday, January 24, 2019, at home. Born August 6, 1961, in Bellefonte, he was the son of the late James E. Addleman, Sr. and Eleanor Casselberry Addleman. On August 10, 1984, he married Kathy Getz. Terry is survived by his wife, Kathy; daughter, Kristi Addleman Ritter and her husband, Christopher, of Waynesboro; one granddaughter, Hazel Ritter, of Waynesboro; siblings, Mitzi Lennartz and her husband, Frank, of Bloomsburg, Susan Renaud, of Bellefonte, and Nancy Horner, of Bellefonte. In addition to his parents, Terry was preceded in death by his brother, James E. Addleman, Jr., and his sister, Roxie Strickland. Terry graduated from State College Area High School in 1979. He was a delivery driver for UPS for thirty-two years. Terry was a very active member of the Zion Lutheran Church in Boalsburg, where he served as chair of the Worship and Music Committee, and acted as lay liturgist and usher among many other contributions. Terry enjoyed golfing and was an avid bowler, participating in the Art Defluri Memorial League at Bellefonte Lanes. He enjoyed spending time outside working in the yard and garden, and was an enthusiastic sports fan who enjoyed watching Penn State football, the Oakland Raiders, and the Pittsburgh Pirates. A visitation will be held from 6-8 p.m. on Monday, January 28, 2019, at Koch Funeral Home, 2401 S. Atherton St., State College. Memorial service will be at 11:00 a.m., Tuesday, January 29, 2019, at Zion Lutheran Church, 105 Old Boalsburg Rd., Boalsburg, with Reverend Brent Book officiating. Burial will be in Boalsburg Cemetery. Memorial contributions may be directed to Zion Lutheran Church, 105 Old Boalsburg Rd., Boalsburg, PA 16827, in memory of Terry E. Addleman. Arrangements are under the care of Koch Funeral Home, State College. Online condolences and signing of the guest book may be entered at www.kochfuneralhome. com or visit us on Facebook.
To plant trees in memory, please visit our Sympathy Store.
Published by Centre Daily Times on Jan. 26, 2019.
MEMORIAL EVENTS
No memorial events are currently scheduled.
To offer your sympathy during this difficult time, you can now have memorial trees planted in a National Forest in memory of your loved one.
Funeral services provided by:
Koch Funeral Home - State College
MAKE A DONATION
MEMORIES & CONDOLENCES
28 Entries
Dear Terry E. Addleman's family. I was just shocked hearing about his death today 10/7/2019. I was customer on his UPS route. He dropped of hundreds of packages over the years and we chatted a lot. I was very fond of Terry. And am so deeply sorry to hear about your lost. And I will miss him dearly. My names is Michael Goldfine and I live at 831 Thompson Street. Lemont.
Michael Goldfine
October 7, 2019
It was such a shock to learn that Terry had passed away. We are grateful for his many years of cheery and kind delivery service and will miss him. My heartfelt condolences to his wife, family and friends... those of us on the delivery route had only a tiny glimpse of the life of this good man. No doubt he's looking down and saying, "Man, I'm glad I don't have to make deliveries in THAT weather!" But I'm sure he's with us in spirit. Thanks, Terry, and Godspeed.
Tania S
February 13, 2019
I am so sorry for your loss. May God's promise found in John 6:40, of the hope to see our loved ones again, comfort your heart and give you peace, strength and hope in the days ahead -JW
February 8, 2019
I was so sorry to hear of Terry's passing. He was always smiling and was such a nice person -- I'll miss him. (a frequent UPS package receiver)
Candace
January 30, 2019
During this time of sorrow, may the words of Psalms 94:19 comfort you and soothe your pain. My deepest condolences for the loss of your loved one.
January 30, 2019
So sorry for your loss! Terry was our driver for years and he always brought a smile and brightness to every day we saw him! He will be missed by everyone who knew him!
Elizabeth & Scott Stephenson
January 29, 2019
Terry was always smiling in my class. He was a good student and we always said hello to each other and asked about our families when we saw each other. He will be missed. God Bless all of you in Terry's family!
Joseph Boris
January 29, 2019
May God bless you and your family in this time of sorrow.
Sally Gamble
January 29, 2019
Kathy, I'm so very sorry to hear of Terry's passing. He was a special guy. I'm glad you had many years together just sorry it was cut short. Prayers to you and your family.

SuLainne Fisher Watson
January 29, 2019
so sorry for your loss. Terry was our ups driver at Murata Erie. And yes he always had a big smile on his face. He was one of the nicest drivers we had. He will be missed by all who knew him.
Judy holt
January 28, 2019
new angel in the outfield. rest in peace
red.
joel jones
January 28, 2019
Terry was one of the kindest persons I've ever known. I was always greeted with a big hug and his incredible smile! He will be greatly missed at Zion Lutheran, where he was a very active member his entire life. May our brother in Christ rest in peace.
Georgia Fink
January 28, 2019
Kathy, We were so sorry to hear of Terry's passing. Sending much love to you.
Patrick and Angie Williams
January 28, 2019
In loving memory of a wonderful person. We will love you and miss you always.
January 27, 2019
Kathy, so sorry to hear of Terry's passing. I remember the years when we all worked at GeeBee's together.
A.B.
January 27, 2019
This picture is just how I think of Terry,smiling and nice. We had many laughs together over the years when he delivered to my business. So very sorry for your loss.
Kelley Ferrara
January 27, 2019
I join the others in sadness and grief upon hearing the news about Terry. Terry and the Addleman family are in my thoughts and prayers.
Bruce Russell
January 27, 2019
Terry frequently filled in as a driver on the route near the Bald Eagle State Park. Every six weeks or so I would receive 8- #50 boxes of plaster. It seemed that when the boxes were on the truck,Terry would lean against the rear door and say "How do they know"? What a great personality.
Prayers from the Anderson Family.
January 27, 2019
Terry was a great guy. We always enjoyed joking back and forth when he would deliver to our office. We'll miss seeing him. Prayers to the entire family. Bob Roles and the Pinehurst Homes office.
January 26, 2019
Sending my deepest sympathy, Karen Benner
January 26, 2019
My deepest sympathies to Terry's family. So very sorry for your loss. RIP Terry.
Susan (Forney) Trutt
January 26, 2019
To the entire Terry Addleman family we wish you the peace and comfort that God gives you.
Dick & Pat (Gilligan) Geiser
January 26, 2019
I had Terry in Sunday School. He was such an adorable child with his smiles and quiet approach. Later in life he was my UPS driver. I was so saddened to hear this news. God Bless to his family and may he rest in Peace!
Peggy Ann Rowzer
January 26, 2019
Kathy and Kristi,, I'm very sad and sorry for your loss. Terry is a special person, always will be. Drenda
January 26, 2019
Our deepest condolences to Kathy, Kristi and the entire family.
Love, Patty and Jim Assadinia
Patty & Jim Assadinia
January 26, 2019
Suzy, Nancy and Mitzi,
I'm so sorry to hear about Terry's passing. Our families have always been so very close, and I'm sorry I can't be there for you. Please find comfort knowing you will see him again, and he's in the loving arms of your mom and dad, Jimmy, and Roxie. Love and big hugs to you all.
JACK JESSOP-ELLIS
January 26, 2019
So sorry to hear this news. Terry and I had lost contact over the past several years, but I always considered him a close friend. May God give you and your family peace as you go through this difficult time.
Roger Heintzelman
January 26, 2019
I am sorry to hear of Terry's passing. May god give your family strength in this very difficult time.
Suzy Simmet Fye
January 26, 2019
Showing 1 - 28 of 28 results