Herbert Olen Hardwick
FUNERAL HOME
Carolina Funeral Home and Memorial Gardens
7113 Rivers Ave
North Charleston, SC
Herbert Olen Hardwick N. CHARLESTON - Herbert Olen Hardwick, age 63, of North Charleston SC, entered into eternal rest on Sunday, October 13, 2013 at his residence. He was born in Conway, SC on April 22, 1950 to Herbert N. Hardwick and Lillian Christopher Hardwick. He was a devoted husband, father, and grandfather. He was employed for the last 10 years with the Medical University of South Carolina as a Trades Specialist. He was an avid Gamecocks Fan. He also loved NASCAR and liked to camp out with his friends at the track. He loved to scan the beach with his metal detector and would try to locate the owners of any jewelry he found so he could return it to them. He was a member of Midland Park United Methodist Church. Herbert is survived by his wife: Paula Hardwick of North Charleston SC; daughters: Kristen Logue (Jonathan) of North Charleston SC, and Kelly Perry (Justin) of GA; grandchildren: Jonathan, Chance, Jackson, Carter, Chloe, and Kinsley; brothers: Kenneth Hardwick, and Chris Hardwick; sisters: Helen Crowe, and Patricia Leonard. Funeral services will be held at 11:00 AM on Tuesday, October 115, 2013 at Carolina Memorial Funeral Home Chapel, 7113 Rivers Avenue, North Charleston SC 29406. The family will receive friends at the funeral home on Monday, October 14, 2013 from 5:00 to 7:00 PM. In lieu of flowers memorials may be made in honor Herbert Hardwick to the Hollings Cancer Center - Medical University of South Carolina, 86 Jonathan Lucas St., Charleston, SC 29425. Services provided by Carolina Memorial Park, Funerals and Cremations. Condolences may be sent to the family at www.carolinamemorial.com/obituaries. Visit our guestbook at www.legacy.com/obituaries/ charleston

Published by Charleston Post & Courier from Oct. 13 to Oct. 14, 2013.
To plant trees in memory, please visit the Sympathy Store.
MEMORIAL EVENTS
To offer your sympathy during this difficult time, you can now have memorial trees planted in a National Forest in memory of your loved one.
Funeral services provided by:
Carolina Funeral Home and Memorial Gardens
MAKE A DONATION
MEMORIES & CONDOLENCES
Sponsored by anonymous.
26 Entries
My prayers continue to be with Olen's family. He was a joy to be around. Darlington will never be the same without him there with us. And I don't know who I will pick on and vice versa during the races. I always knew if Jimmy or Jeff won that race that he would be scoping me out Monday morning!! He will be and is already terrible missed by me and my husband George. God Bless you all!!
Ashley Jacobs
October 26, 2013 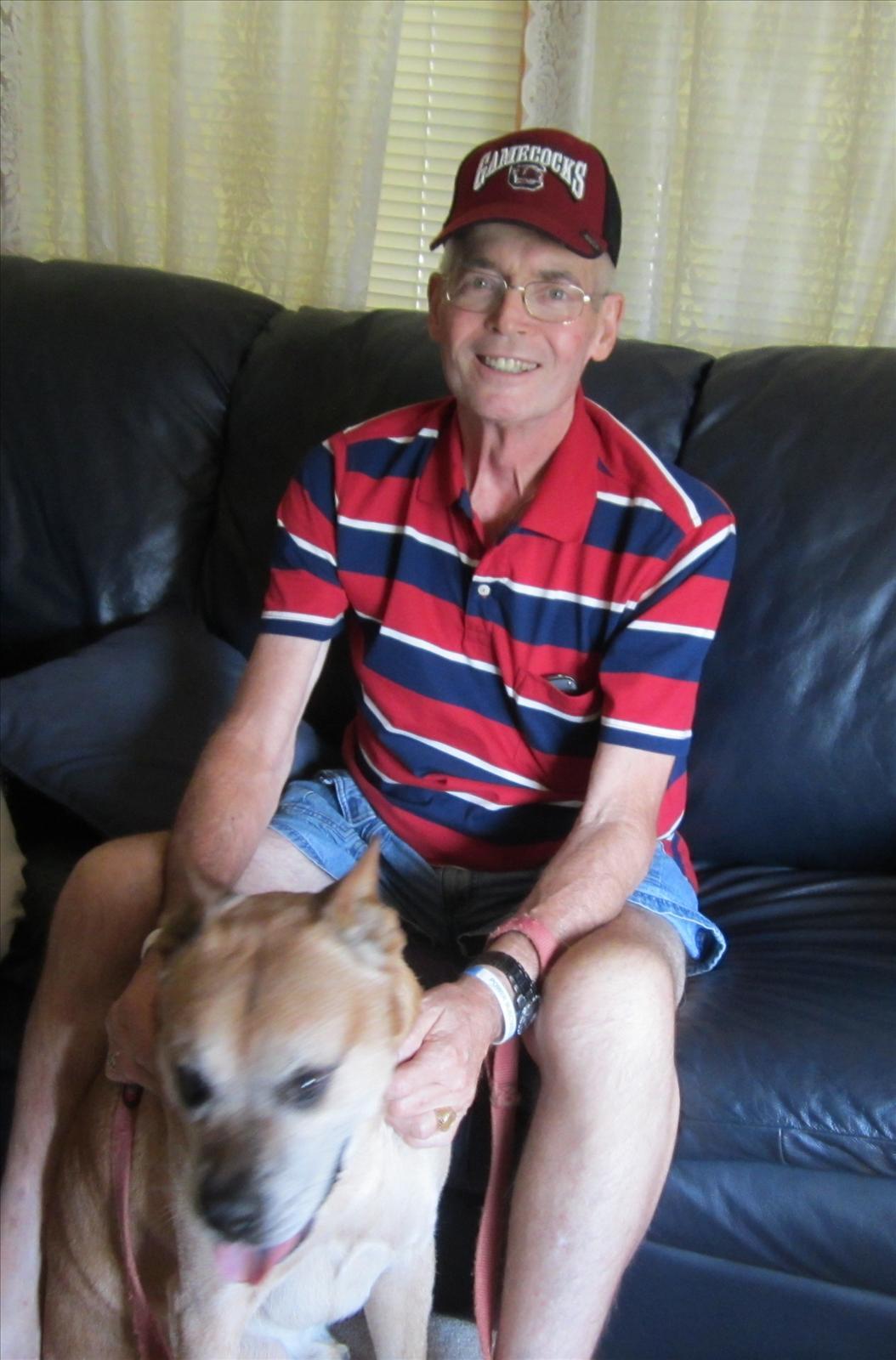 I've learned so much about my brother reading these entries. He welcomed and encouraged everyone. We didn't know how much we were going to miss him.
Helen Crowe
October 22, 2013
Take comfort in knowing that now you have a special guardian angel to watch over you.
rick and sheryl kindt
October 21, 2013
I AM SORRY TO HERE ABOUT THE PASSING OF MR OLIN HE WAS A VERY FINE AND KIND HEARTED MAN WHO LOVE TO LOOK FOR JEWERLY IN THE SAND. I WORK WITH HIM IN AND AROUND MUSC. I WILL SURELY MISS HIM AND HIS CART
carolyn simmons
October 19, 2013
Paula, I am very sorry to hear about olen passing. He gave it all he had. remember the good times. You the girls and grands will be alright. Love sandra and william Fokes.
October 16, 2013
Dear Paula and Family,
It is with a very heavy heart that I write this to you. I can't tell you how much knowing Olen meant to me. Always smiling, always positive, always kind and gentle. I am so very sorry for your loss. May God keep you in His mercy and wrap His loving arms around you today and everyday.
Stephanie Chomos
October 16, 2013
Our friend and neighbor will truly be missed.
Charles & Linda McDaniel
October 16, 2013
My thoughts and prayers are with all of you. Im very sorry for your loss <3
Geri Reid
October 15, 2013
Paula, I am so sorry! It just doesn't seem possible to have a world without Olen. I am sorry I was unable to attend I worked the last couple of nights. My love and prayers and thoughts are with you and the children. Please call if you need to talk.
Much love! Sharon
Sharon Neal
October 15, 2013
To my old friend your light will shine on forever through the happy memories you have left.
Love, Sharon
Sharon Neal
October 15, 2013
To God be the Glory. What a wonderful blessing it was to know Olen. He always remained positive about his illness. You would ask him how he was doing and he would be brief but very direct about his health, then on to the next subject. He was so happy to be a GrandDad. He loved him family.

Find peace and comfort in your memories of Olen.
Cassandra Poole
October 15, 2013
Paula and family--I am heartsick to learn of the passing of Olen. Olen always had a smile on his face, and would stop to talk when we passed in the hallways. He was so proud of his children and grandchildren. His presence here will be sorely missed. Keeping you and family in my prayers.
What a special person he was!
Debbie Browning
October 15, 2013
Olen and I had plenty of college football conversation concerning gamecocks vs. BAMA....he never let me forget that game....thanks Olen for those fun points of interest in our constant busy lives....Rest in peace my friend .....Chris, musc boiler shop
chris clink
October 15, 2013
Dear Uncle Herbert, Paula, and all your family! I am so sorry to hear about Olen. My heart is heavy for you as you go through this difficult time. I haven't seen any of you in a long time, but my thoughts, prayers, and love are with you!
Louise,Hardy,Lawson, and our families.
October 15, 2013
Hello Paula, Its been a long time since me and my wife have said hello and we are saddened for your loss. I actually worked with Olen at MUSC and he was a great guy. Hope to see you again in the future, best of luck to you.
Chuck and Dizzy Bourgeois
October 14, 2013
To Paula and Family,We share your grief in this time of bereavement with deepest sympathy and condolence.
Gene Barrineau
October 14, 2013
Dear Paula,

I am so sad to hear about Olen's passing. He was a ray of SUNLIGHT that graced the volunteer office on occasion. We loved him, and admired him so much. MUSC has lost a good person, and we in the Office of Volunteer and Guest Services will always love and remember Olen. You are in our heart, thought and prayers.
Katy Kuder
October 14, 2013
I did not know Olen for very long, but he was always willing to help me and I will never forget his smiling friendly face. Truly my deepest sympathy, Olen will certainly be missed by all....may God bless and provide comfort to all the family.
Dena Toth
October 14, 2013
Dear Paula,

My heart is saddened to learn of the passing of Olen. I will miss hearing his amazing stories of his finds on the beach, his tales of NASCAR, and his stories of the fun you two had. Please know that my thoughts are with you and your family in this challenging time.
Kelly Finke
October 14, 2013
Paula and Family, I am so very saddened by the news of Olen's passing. I can imagine the pain you are feeling by his loss now. Take comfort in knowing that he is no longer suffering or in any pain. Cherish all the memories of Olen and with Olen in your heart forever. You and your family will be in my thoughts and prayers now and in the coming days ahead. God Bless You all!
Tabbie Jenkins
October 14, 2013
R.I.P Daddy Olen. You will truely be missed.
Amanda Mayer
October 14, 2013
Trish - I had not seen him in many years, but my memory of him is one of a smiling person, happy with life. May God bless and comfort you and your family.
Ricky Archambault
October 14, 2013
Dear Paula, my thoughts are with you & your family during this difficult time. I will surely miss him stopping by the office on the 7th floor to talk about his beloved Gamecocks, his treasure finds at the beach, and showing me his pics of his grandchildren. Tina
October 14, 2013
Rest in Peace my friend. You will be missed.
Fred Miles
October 14, 2013
Dear Paula and family, May God's healing love give your souls comfort. I love you and am here when you need. Olen's spirit will be missed greatly
Susan Alexander
October 14, 2013
To Paula and family,
May God continue to keep your hearts and mind comforted during this special time of your lives. Will keep all of you close in prayer.
Vivian & Calvin Gathers
October 14, 2013
Showing 1 - 26 of 26 results