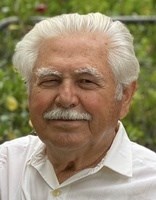 BORN
1938
DIED
2021
FUNERAL HOME
Kenneth W. Poe Funeral & Cremation Service - Charlotte
1321 Berkeley Avenue
Charlotte, NC
Antonios Hristos Poulos
March 15, 1938 - September 17, 2021
Charlotte, North Carolina - Antonios Hristos Poulos, 83 of Charlotte, NC passed away Friday, September 17, 2021. He was born on March 15, 1938 in Psilovrahos, Greece and was the son of the late Hristos and Agathi Makrozahopoulos.
Mr. Poulos was a member of Holy Trinity Greek Orthodox Cathedral where he volunteered his time at the church including the Greek Festival. He was a pious and humble man and was a devout Orthodox Christian and loved his family. Mr. Poulos had a passion for working in the garden growing various fruits, and vegetables, planting flowers and trees, and cooking. He also enjoyed walking in the neighborhood and talking to everyone he met. He will be remembered for his smile and kind demeanor.
Survivors include his loving children, Agathi (Aggie) Poulos and Hristos (Chris) Poulos both of Charlotte; his three brothers, Ioannis and his wife, Efstathia, Konstantinos and his wife, Stavroula, Dimitrios and his wife, Evaggelia, and his sister Maria Avgeris and her husband, Konstantinos. He is also survived by his sisters-in-law, Foteini Makrozahopoulou and Maria Makrozahopoulou, all of Greece along with many nieces and nephews. Mr. Poulos was predeceased by his beloved wife, Spyridoula Poulos, his parents, Hristos and Agathi Makrozahopoulos, and his siblings Athanasios, Andreas, Georgios and Eleftheria.
The funeral service for Mr. Poulos will be 11:00 AM on Friday, September 24, 2021 at Holy Trinity Greek Orthodox Cathedral. The family will receive friends at the church one hour prior to the service. Interment will be at a later date in Greece.
In lieu of flowers, memorials may be offered in memory of Antonios Poulos to Holy Trinity Greek Orthodox Cathedral, Attn: Chapel Furniture Fund, 600 East Boulevard, Charlotte, NC 28203, Panagia Prousiotissa Greek Orthodox Monastery, 404 Warner Road, Troy, NC 27371, Paracletos Greek Orthodox Monastery, 790 Gin House Road, Abbeville, SC 29620 or to Panagia Prousiotissa at Elatos Park, 124 Jim Parker Road, Monroe, NC 28110.
May His Memory Be Eternal.
Arrangements are in the care of Kenneth W. Poe Funeral & Cremation Service, 1321 Berkeley Ave., Charlotte, NC 28204; (704) 641-7606. Online condolences can be shared at www.kennethpoeservices.com.

Published by Charlotte Observer on Sep. 22, 2021.
To plant trees in memory, please visit the Sympathy Store.
MEMORIAL EVENTS
Sep
24
Visitation
10:00a.m. - 11:00a.m.
Holy Trinity Greek Orthodox Cathedral
NC
Sep
24
Funeral service
11:00a.m.
Holy Trinity Greek Orthodox Cathedral
NC
Funeral services provided by:
Kenneth W. Poe Funeral & Cremation Service - Charlotte
MAKE A DONATION
MEMORIES & CONDOLENCES
Sponsored by The Charlotte Observer.
1 Entry
I had the great pleasure of getting to know Mr. Poulos several years back. What a kind, humble and wonderful person he was. He had a passion for his gardening & family and treated me as if he had known me forever. I will miss him and the many conversations we had together
Jimmy Kontoulas
September 22, 2021
Showing 1 - 1 of 1 results