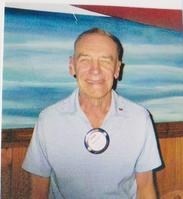 BORN
1932
DIED
2021
FUNERAL HOME
Neptune Society Charlotte
303 E. Woodlawn Rd Suite 4
Charlotte, NC
Bernard Wall
December 19, 1932 - August 23, 2021
Matthews, North Carolina - Bernard L. Wall (Bernie) – 88 of Matthews, NC, formerly of Northfield, NJ, passed away on Monday, August 23. He enlisted in the Air Force at 17-years old and served in the Korean Conflict and then became an Air Traffic Controller. He was a graduate of Stockton State College, NJ. He raised his family in Northfield, NJ and retired in Matthews, NC to be near his daughter and her family.
Bernie loved his family, his daily Starbucks coffee and being outside, especially if he could be near the ocean, fishing, swimming, working in his garden or feeding the birds in his yard. He fostered this love for the outdoors in both his children who carry on his legacy of growing gardens and appreciating nature. He was generous and quick with a smile for friends and strangers alike and had a wry sense of humor even in his final days.
He is survived by the love of his life, Mary Wall and their two children and four grandchildren. Son Tom Wall and his wife Mary and their three children Olia, Davis and Eva of Wellesley Hills, Mass. and daughter Kally Kowalski and her husband Jimmy and their daughter, Nastia of Matthews, NC.
Service will be private, and contributions may be made to Rotary of Matthews, NC or Brace Family YMCA of Charlotte NC.

Published by & from Sep. 16 to Sep. 18, 2021.
To plant trees in memory, please visit the Sympathy Store.
MEMORIAL EVENTS
To offer your sympathy during this difficult time, you can now have memorial trees planted in a National Forest in memory of your loved one.
Funeral services provided by:
Neptune Society Charlotte
MAKE A DONATION
MEMORIES & CONDOLENCES
Sponsored by The Charlotte Observer.
8 Entries
I´m sorry for your loss. Great memories of Mr. Wall coaching and umpiring little league baseball games in Northfield. God bless him and your family.
Ed Woltmann
September 18, 2021
My thoughts and prayers are with Mary and her family at this sad time. Bernie was my neighbor when we worked for the FAA in Atlantic City and a good friend. I will miss him.
Alex Malon
September 17, 2021
Sending my deepest sympathy the family
Ms. T
September 17, 2021
As a colleague and a friend Bernie showed much patience and a great sense of humor. I enjoyed our talks and his way with students. His wife Mary, who was a great asset to ACCC while she worked there, is a special woman. My condolences to you and your family.
Dr. Alice Rainey
School
September 16, 2021
I was sorry to learn of Bernie's death. I have nice memories of him bringing Mary her morning coffee when she and I were volunteers together at the cash register at Matthews Help Center. Mary, I miss our chances to have lunch together and send my deepest sympathy to you and all your family.
Dotty Dysard
Other
September 16, 2021
I am so sorry to hear of your loss. Mary, although we have not seen each other for many years I wanted to let you know I send my sincerest condolences to you and your family. Sincerely, Marilyn
Marilyn Levinsky
September 16, 2021
May your hearts soon be filled with wonderful memories of joyful times together as you celebrate a life well lived. Old Northfield neighbor
Milton Siglin
September 16, 2021
To the Wall Family, I send Prayers to you all at this time. I Will always remember how nice he always was to me and everyone. He will be missed. God bless you all
John Ayres
September 16, 2021
Showing 1 - 8 of 8 results