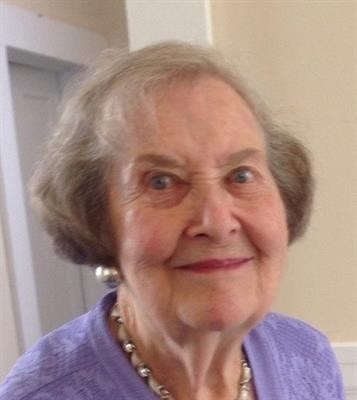 BORN
1928
DIED
2018
FUNERAL HOME
Hartsell Funeral Home - Concord
460 Branchview Dr. NE
Concord, NC
Betty Culbreth McLean Ritchie, a resident of Harrisburg, NC, unexpectantly passed away on November 15. Having celebrated her 90th birthday on September 30, she was continuously active as a dedicated servant in her church and tireless volunteer in the community until her death.

A native of Raeford, NC, Betty graduated from Hoke County High School and, in 1950, received a BA degree in Bible and Social Studies from Flora Macdonald College (now St. Andrews University). At Flora Macdonald, she was President of the Christian Association, May Queen, and selected for Who's Who in American Universities and Colleges. She served as a Director of Christian Education in the First Presbyterian Church of Wilson, NC and in two Presbyteries in the Synod of NC before her marriage in 1954 to the late Rev. Stuart A. Ritchie. Betty supported Stuart in ministry at Presbyterian churches in Fayetteville and Troy, NC and Amity Presbyterian Church in Charlotte.

As a teacher, she was on the staff of a pre-school in Troy, NC; a Montessori School in Laurel, MD; and, after receiving her teacher certification in mathematics at UNCC, she taught at two Charlotte junior high schools--Cochrane and Hawthorne. In 1984, she was chosen as Teacher of the Year at Hawthorne.

A former Elder and Moderator of Presbyterian Women, Betty received a Life Membership in Presbyterian Women in 2001. In 2018 she was honored by Charlotte Presbytery with a Legacy award, given to senior adults in recognition of outstanding service in church and community.

Betty served as Chief Judge for her voting precinct in Cabarrus County for many years. She remained actively involved in other community organizations. She was a member of Alpha Delta Kappa, an honorary sorority for women educators, serving as President for two terms and an Executive Board member for many years. Coordinator of volunteers for the Harrisburg Public Library since 2010, she was honored by the NC Library Association as Volunteer of the Year in 2013. Betty volunteered at the Center for Community Transitions for several years, and in 2017 was chosen as Volunteer of the Year. She also supported the Red Cross as a lifelong blood donor.

Betty was the daughter of the late H.R. and Sadie Culbreth McLean of Raeford. She is survived by two sons, Mac Ritchie of Trabuco Canyon, CA and John and his wife Theresa Ritchie of Frisco, TX; grandchildren are Courtney, Taylor, Troy Ritchie, Chad (Sydney) Ritchie, and Kayla (Alex) Gary; two sisters, Mary (Wyatt) Aiken of Morganton, and Hazel Hubbard of Gaffney, SC.

A memorial service for Betty will be held at Newell Presbyterian Church on Saturday, December 15, 2018, at 2 pm. The family will receive friends at the church following the service.

On-line condolences at www.hartsellfh.com
Published by Charlotte Observer on Nov. 18, 2018.
To plant trees in memory, please visit the Sympathy Store.
MEMORIAL EVENTS
Dec
15
Memorial service
2:00p.m.
Newell Presbyterian Church
NC
Funeral services provided by:
Hartsell Funeral Home - Concord
MAKE A DONATION
MEMORIES & CONDOLENCES
Sponsored by Her Loving Family.
4 Entries
My sincere condolences to the family on the loss of your loved one. Death can bring so many tears and pain but your memories of them can bring you comfort. May the God who "comforts all who mourn" sustain your family during this difficult time. (Isaiah 61:1, 2)
January 3, 2019
My condolences for your loss. May your good memories and God's word help you endure. His word offers comfort. Psalm 119:76
McCombs
December 20, 2018
Betty was a wonderful sister whom I dearly loved, admired, and respected. Her dedication and faithfulness to the church, her family, her friends, and to everything she undertook to do was inspiring. Throughout her life her friendly, happy, and compassionate nature endeared her to others. I could not have had a better role model or friend, and I shall be forever grateful that in God's providence He placed us together as family for our earthly journey.

The Beatitude Blessed are the pure in heart makes me think of Betty. As a child, I knew that Betty was good. She was consistently helpful and obedient to our parents and patient, understanding and caring to Mary and me, her younger sisters. She had a gentle, kind manner with everyone. I wanted to be like her. As an adult, I admired Betty's giftedness and her strong commitment to helping others as a church leader, teacher, wife, mother, and friend. Her humility, integrity, and selfless nature were evident in all her activities and relationships. Throughout her life Betty was good, pure in heart. Her goodness grew out of her deep love for God and her love for all the people who came into her life. Blessed are the pure in heart, for they will see God. Today Betty is seeing God.

On a recent plane trip, I watched the documentary about Fred Rogers (Mr. Rogers) life and his unselfish, non-judgmental approach to everyone he encountered. While watching the movie, I found myself thinking about how my Mom, Betty Ritchie, was very much the same in terms of the way she interacted with people. I found the following quote from Fred Rogers and based on his description of a hero, my Mom was a true hero in this world.

We live in a world in which we need to share responsibility. It's easy to say It's not my child, not my community, not my world, not my problem. Then there are those who see the need and respond. I consider those people my heroes. - Fred Rogers

For as long as I can remember, my mother Betty had a framed quote displayed at home which I believe sums up her character and her approach to life in general:

What do we live for, if it is not to make life less difficult for each other? - George Eliot

Mom was not just a glass-is-half-full optimist, she genuinely believed that her cup runneth over with all of the good things that God and life had bestowed upon her. She lived her entire life with a sense of duty to do whatever she could to help others, in small ways and in big ways. Every person that she encountered was an important person. Her days were spent offering kind words, expressions of encouragement, lending a helping hand, and saying prayers for others. Mom was always humble, never boastful.

We have not only lost a beloved family member, the community as a whole has lost a unique and beautiful beacon of light. We thank God for my mother's life, and for her example of how life should be lived.

With endless love,
John Ritchie (son, Frisco TX)
John Ritchie
December 12, 2018
You will be dearly missed Ms. Betty! The women at The Center for Women adored you. You gave of yourself routinely and made sure the women's passes were picked up. I will always remember you as the strongest elderly woman I've ever met. You never wanted assistance and always said you were okay. I loved your determination to stay active and independent. It is a blessing that I got to meet you in this lifetime.

Prayers to your family and may you rest in love and peace.
Delilah Montalvo
November 18, 2018
Showing 1 - 4 of 4 results