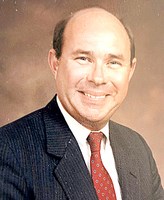 BORN
1941
DIED
2020
FUNERAL HOME
Kenneth W. Poe Funeral & Cremation Service - Charlotte
1321 Berkeley Avenue
Charlotte, NC
Channing Orr Richards
August 9, 1941 - November 14, 2020
Charlotte, North Carolina - Channing Orr Richards, 79, son of the late Margaret Kercheval Murnan and Channing Leathers Richards passed away peacefully at home surrounded by family from complications of Parkinson's disease on Saturday, November 14, 2020.
Chan was a great man, a devoted brother, husband, father and grandfather as well as a soft-spoken leader in the Charlotte legal community.
Chan was a member of the Myers Park High School class of 1959, going on to graduate from the University of North Carolina Chapel Hill in 1963. A lifelong Tar Heel, he frequently joked that he received his education from UNC and went to trade school at Duke University School of Law, where he earned his JD in 1966. He served in the United States Navy JAG Corp and loved the Navy so much, he remained in the reserves, retiring as a Commander.
He began the practice of law in Charlotte at DeLaney, Millette and DeArmon, and subsequently formed a partnership with Neil Williams, Jim Martin and Phil Howerton. In 1976, he established Essex Richards PA with partner Ken Essex in the Talliaferro House, a Victorian home that they moved from College Street to East Blvd. Two decades later, the firm presciently relocated to the South End where the firm served as an anchor for development in the area.
Chan was a voice of reason in the legal community, serving as Chair of the Bar Ethics Committee. His briefs were written in clear, concise prose in which his philosophy of helping those in need was unmistakable.
While his commitment to the legal profession was unwavering, he was equally committed to his family. Chan loved to watch his kids pursue what they loved; he never missed a track meet or a soccer game. He routinely drove hours to surprise his daughter Stuart at her college soccer games. Family vacations were sacred, and all work would have to wait. His family always knew they came first.
In 2006, Chan retired and moved with his wife Sallye to Bald Head Island where they built a home two decades earlier. Chan loved to fish the creeks and go deep-sea fishing with his son, Chan, on his boat "Laughing Gull." Chan and Sallye enjoyed full-time residency at Bald Head for the better part of ten years. Each day, they enjoyed their afternoon happy hour with friends at the dog park.
Chan loved the many family pets especially dogs, Satchel, Billy Bob and Daisy; he learned to love cats when Oleander entered his life. He was an all-star first baseman at Myers Park High and as an adult, he coached Babe Ruth teams with his brother John. They had the good fortune to coach Mike Fox, the longtime UNC baseball coach. Mike recently gave Chan an inscribed baseball that read, "Thank you for coaching me so well many years ago. Those lessons carried over!"
Chan is survived by his loving wife of fifty years, Sallye Tathwell Richards; children, Channing Leathers Richards II and husband, Brandon Hagar and Gwynne Stuart Richards Pfeifer and husband, Jay Pfeifer; grandchildren, Channing Elizabeth Pfeifer and Charles Tathwell Pfeifer; brother, John Richards and wife, Ann and sister, Edith R. Salmony and husband, Steve. He is also survived by his sister-in-law, Gwynne Tathwell Whitley and husband, Craig and brother-in-law, Stuart Tathwell and wife, Sally as well as many nieces, nephews and other family members.
The family would like to thank caregivers, Elizabeth Burris and Shenna Scott, Dr.'s Charles Ferree, Dale Owen and Catherine Ferrara and Hospice and Palliative Care Charlotte Region.
In lieu of flowers, memorials may be made in Chan's name to Michael J. Fox Foundation, Donation Processing, P.O. Box 5014, Hagerstown, MD 21741-5014 or Selwyn Avenue Presbyterian Church, 2929 Selwyn Avenue, Charlotte, NC 28209.
A private memorial service will be held at 11:30 AM on Thursday, November 19, 2020, at Selwyn Avenue Presbyterian Church. The service will be livestreamed:
https://www.facebook.com/SAPCPCUSA/ Interment will be private at Evergreen Cemetery.
Arrangements are in the care of Kenneth W. Poe Funeral & Cremation Service, 1321 Berkeley Ave., Charlotte, NC 28204; (704) 641-7606. Online condolences can be shared at www.kennethpoeservices.com.

Published by Charlotte Observer from Nov. 18 to Nov. 22, 2020.
To plant trees in memory, please visit the Sympathy Store.
MEMORIAL EVENTS
Nov
19
Memorial service
11:30a.m.
Selwyn Avenue Presbyterian Church
NC
Funeral services provided by:
Kenneth W. Poe Funeral & Cremation Service - Charlotte
MAKE A DONATION
MEMORIES & CONDOLENCES
5 Entries
Remember many enjoyable times growing up in Charlotte. I remember visiting your house near Myers Park Elementary many times. I do remember seeing you in Charlotte several times after college, but it was a long time ago.
George Wisecarver
Classmate
April 6, 2021
We were classmates at Myers Park High and friends, and once roommates at UNC Chapel Hill. I listed myself here as “friend” but I really wanted to say “student.” Chan taught me so much. As I reflect on Chan, I realize how ethics and character were so deeply ingrained in him that being with him was a constant life lesson. It’s not that I recall specific instances but rather than thinking to myself “what would Chan do?” would always guide me in the right direction. He never knew how much he was my teacher. Blessed by Chan Richards.
Walter Dellinger
Friend
November 23, 2020
Sorry for your loss. May the God of comfort be with you all during this difficult time. (2 Cor. 1:2-4)
ZF
November 21, 2020
Chan was a true gentleman and will be missed. Although I had not seen him in years, I knew him from our “early” days at MPHS. My deepest sympathies to Sallye and the family. She, too, goes back to our “early” days at MPHS. May God’s peace be with you all.
Tom Moore
Friend
November 19, 2020
I am sorry to hear of your loss. Please accept my condolences. May the love of friends and family comfort you through your grief. 2 Thes 2: 16,17.
D T
November 19, 2020
Showing 1 - 5 of 5 results