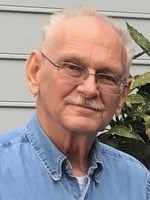 BORN
1943
DIED
2021
FUNERAL HOME
James Funeral Home
10520 Arahova Drive
Huntersville, NC
Donald Bechtol
November 10, 1943 - August 11, 2021
Cornelius, North Carolina - Donald Scott Bechtol, 77, of Cornelius, NC, passed away on Wednesday, August 11, 2021. He was born on November 10, 1943, in New Haven, IN, to the late Herbert and Evelyn Bechtol.
Donald attended Indiana University in Bloomington, IN, majoring in Business. After graduating he entered the US Army and served in Vietnam. After being honorably discharged from the Army he moved to Fort Myers, FL, where he began a career as an auditor in banking, continuing until his retirement from Bank of America in 2006. While in Fort Myers he was involved in scouting and model railroading, and he remained involved until moving to Cornelius in 1993.
Donald was heavily involved with Habitat for Humanity prior to and after retirement, travelling to multiple locations to build homes, both domestic and abroad. He remained active with Habitat for Humanity through the local habitat Re-Store after he was no longer able to help build homes.
Donald loved spending time with his family, particularly his grandchildren. He always had a story or joke for the kids, and they always loved hearing them. He enjoyed travel, gardening and working on home improvement projects, even helping both of his sons in remodeling their own homes.
Donald was preceded in death by his wife of almost 50 years, Patricia. He is survived by his sons Christopher (Magan) with grandchildren Grace and Katie of Harrisburg, NC and Nathaniel (Amy) with grandchildren Will, Anna and Ben of Pinson, TN. He is also survived by brother Dennis (Kathy) Bechtol and sister Kay Gulmy, both of Fort Myers, FL, brother Davis ( Harriet) Bechtol of Summerville, SC, brother Doug Bechtol of Raleigh, NC, brother-in-law Sam Porter and sister-in-law Joan Porter, both of Fort Myers, Fla.
A dual Inurnment service for Donald and his wife, Patricia, who died on November 16,2020, will be held on Friday, September 24, 9:00 am at Salisbury National Cemetery. The memorial service will be held after the inurnment at James Funeral Home in Huntersville, NC 11:00 am.
In lieu of flowers memorials can be made to The Leukemia And Lymphoma Society or Habitat for Humanity.
James Funeral Home, of Huntersville, is serving the family.