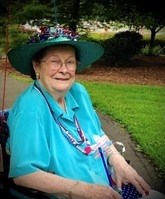 BORN
1923
DIED
2021
FUNERAL HOME
Moloney-Sinnicksons Funeral Home and Cremation Center
203 Main Street
Center Moriches, NY
Ellen Mary Colello (nèe Maginn)
September 19, 2021
Lake Wylie, South Carolina - Ellen Mary Colello slipped peacefully into eternity on September 19th and while she was officially older than sliced bread, she acted young until the end.
As the daughter of immigrants, Ellen was Irish to her core, dutifully dancing all the Irish dances with her sister as a child.
Part of the Greatest Generation, Ellen did her part as an air raid warden in Queens, NY. Ellen also worked at CBS in New York City during the golden age of radio. She remained as lovely in her later years as she was when she was being scouted by modeling agencies in NYC.
One of Ellen's super powers was she could simultaneously watch the Golden Girls, eat a brownie with a cup of tea, and beat the pants off of her UNO opponents.
Ellen met the love of her life, Salvatore, at a "Dime a Dance." First came love. Then came marriage in 1950. Then, four babies; three girls and a little prince. Ellen is survived by her daughter, Kathy and her husband, Chuck Pollak; her daughter Ellen and her husband Walter Godzieba; her daughter Trish and her husband, Jay Austin; and her son, Michael and his wife Marie. Ellen leaves behind a whole host of grandchildren and great grandchildren who will miss her intensely. She also leaves behind her little brother, Bill Maginn, and sister-in-law, Joan Colello. We are sure Ellen was greeted in heaven by her loving husband, Sal, her sister, Theresa, her brother Connie, and parents, William and Ellen Maginn.
A celebration of Ellen's life will be 11:30 am Monday, September 27, 2021 at Moloney-Sinnicksons Funeral Home, 203 Main Street, Center Moriches, NY. The family will also receive friends Monday from 10:00 am to 12:00 pm at Moloney-Sinnicksons Funeral Home. Burial will follow in Calverton National Cemetery.
M. L. Ford & Sons, Lake Wylie, SC is handling local arrangements and Moloney-Sinnicksons Funeral Home will be handling arrangements in NY.