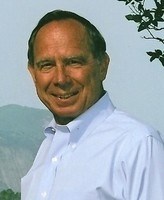 BORN
1937
DIED
2021
FUNERAL HOME
McEwen Funeral Home & Cremation @ Myers Park
500 Providence Road
Charlotte, NC
James Knox Ashford
January 20, 1937 - September 20, 2021
Charlotte, North Carolina - James Knox Ashford passed away peacefully, after a brief illness, surrounded by family in Charlotte, NC on Monday, September 20, 2021 at the age of 84. Born January 20, 1937 in Starkville, MS, he was the son of the late Charlie Rabb Ashford and Nan Smith Ashford.
James "Jim" graduated from Mississippi State University in 1958 with a Bachelor of Science in the school of Business and Industry and completed the Harvard University Advanced Management program in 1976. Jim was also a member of the Kappa Sigma Fraternity and the Naval Reserve.
After graduation from Mississippi State University, Jim joined Walker Manufacturing, a division of Tenneco, in Aberdeen, MS, in 1958. From there he held various managerial positions within Tenneco as he advanced up the corporate ladder. He became President of Monroe Auto Equipment, a division of Tenneco, in Monroe, MI in 1978 and was named President and CEO of Tenneco Automotive in the Chicago area in 1982. Jim was named President and CEO of Case IH in Racine, WI in 1987. Jim led with character and respect and was admired for being a "man of his word". With all the success that Jim achieved in business, it paled in comparison to the importance of spending time with his family. For that reason, and despite opportunities for continued advancement, Jim decided to retire from Case IH in 1991 after 33 years of service to dedicate time to his family.
Jim was recognized for numerous achievements and was voted into the Automotive Hall of Fame. He was awarded Outstanding Business Leader of the prestigious Northwood Institute, a Distinguished Eagle Scout award, and the Mississippi State University National Alumnus of the Year in 1996.
After retirement, Jim was able to focus his time and energy on his wife, Jacque, his three children and his beloved MSU Bulldogs. He served on the MSU Foundation Board for 18 years and was National General Chairman of the Campaign for Mississippi State in 1993.
Jim and Jacque enjoyed spending their retirement playing golf and being with friends in Naples, FL and at Highland Falls Country Club in Highlands, NC where he shot his only hole in one. Jim loved cheering on his seven grandchildren at their sporting events in Charlotte, his daily run and workout, watching western movies and a full pour of Chardonnay. As Jim would say, "If you ever get to it, and don't do it, you may never get to it to do it again, so do it."
After Jim's wife of 52 years passed away in 2013, Jim rekindled his relationship with his high school sweetheart, Linda Hobbs and they married in 2014. She was a great source of love, joy and companionship. We are so thankful for Linda.
James is survived by his loving wife, Linda Hobbs Ashford; three children, Diane A. Denton and husband Bill Denton of Cornelius, NC, James K. Ashford, Jr. and wife Jennifer Ashford of Davidson, NC, and Catherine A Hensley and husband Andrew Hensley of Charlotte, NC; seven grandchildren, Sarah Denton, Spencer Ashford, Michael Ashford, Harrison Ashford, Garrett Hensley, Carter Hensley and Alex Hensley; sisters, Patricia A. Johnson, Sally A. Monroe, Hanna A. White; and brother, Walter Pepper Ashford. Jim is also survived by Linda's children, Jim Hobbs, Christy Hobbs Harpole and David Hobbs and their families. He is preceded in death by his brother, Charlie Rabb Ashford Jr. and his first wife, Jacqueline Martin Ashford.
The family will receive guests from 4:00 pm–5:00 pm, at McEwen Funeral Home Myers Park, 500 Providence Rd., Charlotte, on Saturday, September 25, 2021.
A funeral service will be held at 2:00 pm on Sunday, September 26, 2021, in the sanctuary of Myers Park Presbyterian Church in Charlotte, NC. The service will also be live streamed on the church website.
In lieu of flowers, memorials should be made to the MSU Foundation, Inc. for the James K. Ashford Endowed Scholarship at P.O. Box 6149, Mississippi State, MS 39762, online at msufoundation.com or a charity of your choice.
Condolences may be offered at www.McEwenMyersPark.com