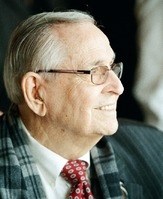 BORN
1930
DIED
2021
FUNERAL HOME
McEwen Funeral Home & Cremation @ Myers Park
500 Providence Road
Charlotte, NC
John Sutton Miller, Jr.
February 3, 1930 - September 22, 2021
Charlotte, North Carolina - John Sutton Miller Jr., 91, passed peacefully at his home in Charlotte, NC with family at his side on the morning of September 22, 2021. John lived an extraordinary life defined by his abundantly generous heart and bold spirit.
Born in Pineville, North Carolina on February 3, 1930, John grew up in the Mallard Creek area of rural Mecklenburg County. He graduated from Newell High School with a graduating class of 7. An alumnus of North Carolina State University, he started working for Vincent Realty after college and got his real estate license, which he maintained for the entirety of his lifetime. In 1952 he married the love of his life, Doris Glenn Brown and they raised two sons together. Upon his father's death John was asked to return home to run the county home fondly known as Green Acres, a 500-acre self-sufficient farm and rest home.
John never did anything halfway. If he was passionate about a cause or a community he would rise to the occasion. He and Doris were members of Central United Methodist church for over 60 years and in that time he served on the Board of Trustees and was Chairman of the Building Committee. They were loyal supporters of Charlotte Country Day School and for many years lived across the street. While their sons attended, they began hosting an annual dinner for the football program that later became an annual tradition. Their loyalty to the school resulted in them being honored as Charter Members of the CCDS Alumni Association. John also was a founder of the North Carolina Association for Long-Term Care, a president of the Mecklenburg Farmers Mutual Insurance Co., president of the North Carolina Multiple Sclerosis Society, chairman of the Fund Raising Committee for the Federal Employees of North Carolina, and President and Lt. Governor of the Western North Carolina Civitan.
John was an honored 33rd degree Mason and served as Potentate of the Oasis Shrine Temple, raising over $1,000,000 for Shriner Hospitals. During his tenure as Shriner, he was the Director of the Royal Order of Jesters Charlotte Court #109 and a member of the Order of the Q. He was a member of The Scottish Rite. He was especially proud of his 3 terms as a member of the Board of Trustees for 22 Shriner Hospitals and his service to the Imperial Potentate. As a member of the Board, he traveled to hospitals and temples across the country and around the world raising money and awareness. In 2013 John was the recipient of the Imperial Potentate's Award of Merit.
John and Doris were extensive world travelers. Their adventures took them from the palaces of Europe to the wilds of African safaris. They journeyed to New Zealand, Australia, and toured much of South America. Through John's work with the Shrine, they visited nearly every state in the U.S. as they worked to support the Shriners Hospitals. When they wanted to unwind a little closer to home, they would spend time on Lake Wylie, North Myrtle Beach, or in the mountains at their place at Grandfather Mountain, often accompanied by family and friends. As an avid outdoorsman, John was always at home deep in the woods or sitting at a dock with a fishing pole. Growing up, he loved to go hunting and that love continued for the entirety of his life. He was a long-time member of the Catawba Springs Hunting Club and supported the efforts of wildlife conservation and management.
For all John's many accomplishments, his family was perhaps his greatest point of pride. He was intensely proud of his sons and he adored each of his grandchildren and great-grandchildren. Each of his family members knew that 'Big John' loved them fiercely. John's joy when around his grandchildren was luminous. It radiated from his open smile and crackling laughter. To be a part of 'Big John's' family meant that he would always be looking out for you and ready to pick you up if you fell down.
Once John and Doris joined the Southminster Senior Living community, where they lived for over 10 years, John started organizing monthly dinners, where he would load a bus and go get all-you-can-eat oysters at Big Daddies. Attendees of these dinners knew John to be a cheerful and welcoming host. To sit with him at his dinner table was to be invited into the best social club in town. He never forgot a face and never met a stranger.
John is now reunited with his cherished wife, Doris, their infant daughter Doris Glenn, and his parents, John Sutton Miller Sr. and Lillian Crow Miller.
He is survived by his sister, Maryann Cathey; his sons, John Miller (Claire Miller) and Tom Miller (Elizabeth Grillo); his grandchildren, Dr. Carrie Miller (Dr. Kiernen Willet), Shannon Miller, Zach Miller (Avery Miller), Jackson Miller, and Mary Miller (Nolan Dwyer); his great-grandchildren, Amelia Claire Willet and Nora Willet; and his devoted friend and caregiver of 22 years, Brenda Jones. John's family would like to extend gratitude to Lisa Tomchin and the staff and friends at Southminster Retirement Community for all they have done for John.
Due to current public health concerns, the family will be holding a private graveside service.
The service is being handled by McEwen Funeral Home at Myers Park, Charlotte, NC. If you have photos, stories or sentiments to express regarding John's life, please go to their website at www.McEwenMyersPark.com in order to share.
In lieu of flowers, the family requests that memorials be made in John's honor to: Shriners Hospitals for Children, c/o Oasis Temple; or the Catawba Lands Conservancy; or a deserving charity of your choice.

Published by Charlotte Observer on Sep. 26, 2021.
To plant trees in memory, please visit the Sympathy Store.
MEMORIAL EVENTS
To offer your sympathy during this difficult time, you can now have memorial trees planted in a National Forest in memory of your loved one.
Funeral services provided by:
McEwen Funeral Home & Cremation @ Myers Park
MAKE A DONATION
Please consider a donation as requested by the family.
MEMORIES & CONDOLENCES
Sponsored by The Charlotte Observer.
3 Entries
John was my husband Miller Newton´s best friend. People who knew them called them the Miller boys! He was always there to help anyone who needed help. He and Miller had a great friendship which led me to being friends with Doris and John. They were everybody´s friend and everybody´s helpers. Their joy came in helping people in need. I loved them both and have missed Doris tremendously. . I know John is happy to be in heaven with Doris and Miller. He was truly one of a kind. Rest In Peace dear friend. You will be missed by all who knew you!
Jill Newton
September 26, 2021
John was a very kind and generous man. He was always willing to help anyone in need. I worked as his accountant for 22 years, and I have never known a more generous person. BJ, as I called him, loved his family and was a true and loyal friend to many. RIP, BJ and I hope you are spending time with your "Honey Bun", Doris. Until we meet again.....
Linda Workman
Friend
September 25, 2021
The family of John and Doris are in my prayers. Two wonderful people! Doris's Father, CT Brown, gave me the first bonus I ever received. It was $25 in a manila envelope. I was on the teller line at First Federal Savings and it was 1962. I was so excited. That is where I meet most of the family (Craig, etc). John always came to my rescue at Central (such as serving as Treasurer, not making the apportionments goal for the year). He came forward and helped me make that happen. I shall never forget so many things John and Doris did for me and the church. When my husband died instantly, John called a week or so later to ask me if I was going to be ok. What person other than John would do that! God has two more angels with him now. Prayers for all of you! Loretta Thomas (John always call me Lynnetta)
Loretta Thomas
Friend
September 25, 2021
Showing 1 - 3 of 3 results