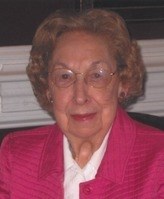 BORN
1925
DIED
2021
FUNERAL HOME
J. B. Tallent Funeral Service
1937 North Sharon Amity Road
Charlotte, NC
Lula Stanford Ashley
September 17, 2021
Charlotte, North Carolina - Lula Stanford Ashley (affectionally known as Mia) of Charlotte passed away peacefully Friday, September 17, 2021, at Sharon Towers. Born November 23, 1925, to the late Henry Grier and Pinkie Glenn Stanford. Lula was proud of her deep roots in the Sharon Community and was presented with an honorary lifetime membership to Sharon Presbyterian Church in 1983 where she had faithfully served in many roles. She graduated from Sharon High School and in 1947 from Mercy School of Nursing. Lula enjoyed a long nursing career with Mecklenburg Medical Group.
Lula is survived by her loving and devoted family, daughter, Anne Harris (Skeet), son Stan Ashley (Jan). Grandchildren, Douglas Ernsberger (Angel), Ashley Cooper (Daniel), Elizabeth Ann Ashley and Hannah Moore Ashley. Great grandchildren, Cole and Max Ernsberger and Ford and Lula Cate Cooper and many nieces and nephews. She was preceded in death by her husband of 59 years, George Ashley, Sister Margaret Thomas (Dwight), brothers William Stanford (Isabelle), Joe Stanford (Margaret) and Jack Stanford.
A service to celebrate Lula's life will be held Tuesday, September 28, 2021, 11:00 a.m. at Sharon Presbyterian Church, officiated by Dr. Rob Blumer and Reverend Ron Nelson. The family will receive friends following the service.
Lula's love for her family and friends was exceeded only by her love for "Our Lord". She will be missed by all that knew her. The family extends a sincere thank you to all who cared for Mia especially the staff of 2AW at "The Tower" as her great grandchildren called it.
In lieu of flowers donations can be made to Sharon Presbyterian Church Ester Brown Choir Fund or to Sharon Towers Residents'Assistance Fund.

Published by Charlotte Observer on Sep. 26, 2021.
To plant trees in memory, please visit the Sympathy Store.
MEMORIAL EVENTS
Sep
28
Service
11:00a.m.
Sharon Presbyterian Church
NC
Funeral services provided by:
J. B. Tallent Funeral Service
MAKE A DONATION
MEMORIES & CONDOLENCES
Sponsored by The Charlotte Observer.
4 Entries
Dear Anne and Stan, I am sorry to hear of your Mother´s passing. She was a special Lady and the entire Hague Family has fond memories of growing up just two houses away. We will always remember her sweet smile, great memories. God Bless.
Pat Hague
Friend
September 27, 2021
Ann and Stan....I was so sorry to hear of your Mom's passing! She was a great lady and will be surely be missed....keeping you in my heart and thoughts.....
Melanie McGarity Nichols
September 26, 2021
mrs. ashley was the sweetest mom in all the neighborhood when we were kids with anne and stan. a great example to her children
bubba
September 26, 2021
All our thoughts and prayers to you and your family. We know all will miss Lula/ your Mom.
Ann & Walt Densmore
September 23, 2021
Showing 1 - 4 of 4 results