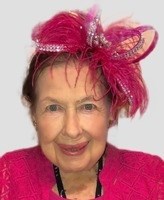 BORN
1925
DIED
2021
FUNERAL HOME
Hankins & Whittington
1111 East Boulevard
Charlotte, NC
Ruth Rowland Threatt
May 31, 1925 - September 15, 2021
Indian Land, South Carolina - Ruth Rowland Threatt, age 96, passed away peacefully on September 15, 2021, at The Blake Assisted Living Facility, Indian Land, SC.
Ruth was born May 31,1925 in north Charlotte's Belmont neighborhood where her father ran Rowland's Café and Pressing Club next door to her grandfather's establishment next and neighbor Lloyd Threatt, whom she would later marry. Ruth attended Villa Heights School, Charlotte Technical High, then Women's College in Greensboro (now UNC-G).
Ruth's first job was at Charlotte's downtown Belk's department store. A government job later awaited, but Ruth stopped at the North Carolina State Motor Club. While there she was offered a bookkeeping job for $35 a week, which was good money in 1944. She would walk out of that building 35 years later as the first female president of a major southern motor club.
Ruth travelled extensively for the Motor Club choosing to stay at hotels with the least amenities saying she preferred the "interesting, rugged ones".
Ruth was awarded the prestigious Order of the Longleaf Pine by then North Carolina Governor James Martin for her work in safety.
After the 1944 marriage of Ruth and Lloyd Threatt, they bought a 50 acre farm in south Charlotte and built their home from plans that Lloyd had sketched on plain brown wrapping paper. Years later they sold the land which is now the Blakeney Shopping Center area. Until recently she resided in one of the townhomes now located on her old farm property. Ruth was active in equestrian pursuits, coordinator of the Mecklenburg Hounds Club, and a member of the Red Hat Society; and counted as her interests: music, modeling, trips to New York city, growing large vegetables, animals, and serving her family and friends. She enjoyed regularly baking 15 to 18 cakes to be used as door prizes by the Charlotte Tech High Lunch Bunch. Near the end of her life Ruth would write notes and letters to family and friends nearly every day.
"It's been an interesting life" she once said. And no one could disagree. It could also be said that knowing Ruth, and counting her as a friend, made your life all that more interesting also.
Ruth was preceded in death by her husband Lloyd Threatt; her parents William W. Rowland and Carrie Nathan Simpson Rowland; and her sister Ann Rowland McArthur. She is survived by her brother Paul Turner in Colorado; and several nieces and nephews.
Funeral arrangements are being handled by Hankins & Whittington Funeral Home, Charlotte, NC. Ruth requested that no funeral services be performed.

Published by Charlotte Observer on Sep. 28, 2021.
To plant trees in memory, please visit the Sympathy Store.
MEMORIAL EVENTS
To offer your sympathy during this difficult time, you can now have memorial trees planted in a National Forest in memory of your loved one.
Funeral services provided by:
Hankins & Whittington
MAKE A DONATION
MEMORIES & CONDOLENCES
Sponsored by The Charlotte Observer.
5 Entries
Wow.. i can't believe i missed a chance To see Mrs. Ruth Threatt just one more time. I had no idea how blessed my friends and i were to turn off Tom Short rd onto the little dirt track that was the Threatt driveway and a mile later end up at the humble home of Lloyd and Ruth....about 20 chihuahuas would rush out to sound the alarm..Lloyd would walk out of the barn as brown as a the sun could tan him, in shorts only..smiling and Ruth would come out with tea for all us boys. They gave us the run of their farm to camp, fish, hunt and ride our horses. The Kell"s next door (,farm) Did also. An amazing place to grow up, amazing people!!! A lost world compared to what it is now. I last visited Mrs. Threat in her condo just beside the fields she and lloyd had owned forever. Her dog Tiger and 2 younger pups were still with her. She LOVED her fur babies.. i had the opportunity to spend a few hours ..i wish i spent more. Thank you Ruth and Lloyd for blessing my young life..
Jeff Scott
Friend
October 11, 2021
I´m so sorry to hear this. She was a precious person to many.
Miriam J Shick
Friend
October 5, 2021
I remember Ruth as an incredibly kind sweet lady who lived a very full life. She was always baking cakes (and even brought me one!), feeding the birds and wildlife, and corresponding with friends and family every day. I don't think she ever sat still when I knew her. Even with all her life's accomplishments, she was exceedingly humble and always grateful for the people who helped her. She was a treasure to have known.!
Jorjanne Murry
Work
October 4, 2021
My Mother, Martha Wright Helms and Ruth were life-long friends. I had the good fortune of being in the company of Ruth many times over the years. She was amazing and entertaining at every turn. I also had the good fortune in sharing in the cakes she used to bake for the Tech High Bunch when I would take my parents. I am a much better person for having known Ruth.
Doug Helms
October 2, 2021
Ruth had fun,gave back,travelled,loved Charlotte.RIP.
Mark Isenberg
Other
October 1, 2021
Showing 1 - 5 of 5 results